Copycat Samsung Pushes South Korea's Government to give them a License to test Autonomous Vehicles, like Apple 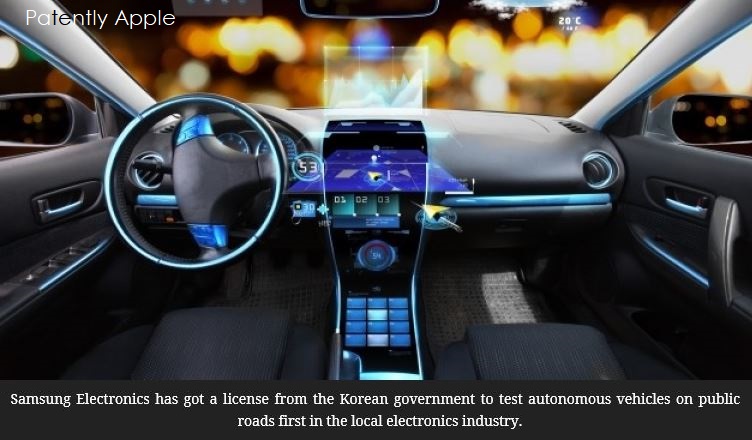 On April 14 Patently Apple posted a report titled "California DMV Lists Apple as one of 30 Permitted to Conduct Autonomous Car Road Tests." A second report was posted on April 28 titled "Apple Provides Feedback on Proposed Autonomous Vehicle Testing to California's DMV Deputy Director." So is it any surprise that Samsung is the first tech company in South Korea to obtain a license from the government to test autonomous vehicles. Yes, monkey see, monkey do.

Business Korea reports today that Samsung Electronics has got a license from the South Korean government to test autonomous vehicles on public roads in the country, attracting attention.

The Ministry of Land, Infrastructure and Transport announced that it gave Samsung Electronics a nod for a test run. Accordingly, Samsung's deep-learning based self-driving cars, which are being developed by Samsung Advanced Institute of Technology, can actually run on actual roads.

Samsung Electronics has become the nation's first electronics firm receiving a license to test driverless vehicles on public roads. The company received the 19th license since the government has introduced an autonomous vehicle temporary operation permit system for test and research purposes in February 2016, and 8th this year.

Then the report contradicts itself by stating that "In March 2016, Hyundai Motor was actually the first to gain approval to test autonomous tech on public roads in the nation, followed by Seoul National University, Hanyang University, Kia Motors, Hyundai Mobis, Korea Transportation Safety Authority, Korea Advanced Institute of Science and Technology (KAIST), Naver Labs and Mando.

Samsung Electronics' self-driving automobile is a commercialized Hyundai vehicle equipped with the latest cameras and sensors, including light detection and ranging (LIDAR) and radio detecting and ranging (RADAR). It also uses artificial intelligence (AI) and deep learning algorithm that should help the car "learn" how to react in certain situations, including road environment and obstacles.

In addition, Samsung Electronics plans to develop smart components such as next-generation sensors and computer modules backed by AI and the deep-learning technologies to improve cars' self-driving capabilities even in challenging weather conditions.

Having Apple get headlines related to autonomous vehicle testing drove Samsung insane and voila, magically Samsung makes sure to get a bloody license so as to not let Apple sound that they have any advantage over them. Ha! At least they're consistant.