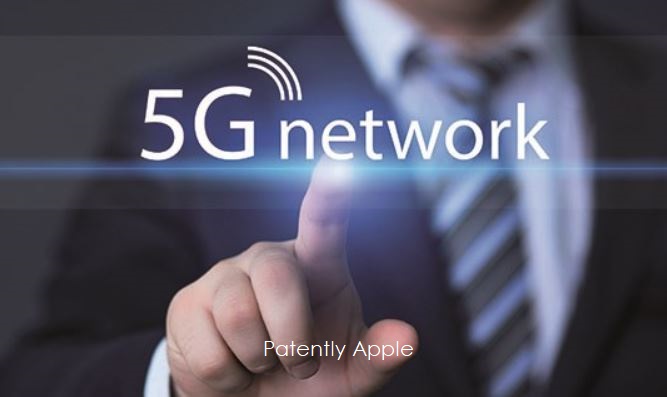 In April Patently Apple posted a report titled "Today the World's First Live Hologram Phone Call was made between Seoul and New Jersey on a 5G Network." Then on May 02 we reported on T-Mobile Vowing to be first with nationwide '5G' Coverage by 2020. Apple is likely to bring advanced Augmented Reality capabilities to iDevices when 5G comes to market in addition to possibly bringing advanced Apple TV capabilities regarding live sporting events and beyond. So it comes as no surprise that Apple has filed an application with the FCC regarding wireless technologies associated with 5G Networks.

Business Insider noted that "An application for an experimental license to use new wireless technology, called millimeter wave, was signed on Tuesday by Apple and made public by the FCC."

A recent Apple patent application referenced this technology in context with Patch Antennas and wireless power transfers: "an electronic device may use the wireless circuitry to transfer power wirelessly to external equipment or to communicate wirelessly with external equipment. Patch antennas may be used for wireless power transfer at microwave frequencies or other frequencies and may be used to support millimeter wave communications." The Patch Antenna is designed to overcome existing problems between wireless charging and communications on smartphones.

Apple noted that their technology could apply and support future iDevices and new devices such as "eyeglasses or other equipment worn on a user's head, television" and others.

In their FCC filing Apple further noted that "Apple Inc. seeks to assess cellular link performance in direct path and multipath environments between base station transmitters and receivers using this spectrum." Apple added that "These assessments will provide engineering data relevant to the operation of devices on wireless carriers' future 5G networks."

Further into the application it was noted: "Apple intends to transmit from two fixed points located at Apple-controlled facilities in Cupertino and Milpitas, CA. These transmissions will be consistent with the parameters and equipment identified in Apple's accompanying Form 442, and will include the use of a horn antenna with a half-power beamwidth of 20 degrees in the E-plane and H-plane and a downtilt between 20 - 25 degrees. Apple anticipates that it will conduct its experiments for a period not to exceed 12 months."

The Apple application specifically mentions the 28 and 39 GHz bands, which the FCC approved for commercial use for 5G applications last year. The experiments will use technology manufactured by Rohde & Schwarz, A.H. Systems, and Analog Devices." For more on this, read the full Business Insider report here.

The graphic above that is associated with millimeter wave communications was used in an ancient 2009 Patently Apple report titled "Apple Working on Next Gen Millimeter-Wave Communication Applications."