According to the latest IDC statistics report the worldwide tablet market once again contracted in the first quarter of 2017 with total shipments of 36.2 million, a year-over-year decline of 8.5%. The first quarter contraction marks the tenth straight quarter that tablets have experienced a decline over the same quarter a year earlier, with the previous five quarters recording double-digit drops. Apple, while remaining the tablet leader, fell a whopping 13% this quarter. The only company showing any growth was China's Huawei that delivered an impressive 31.7% increase. 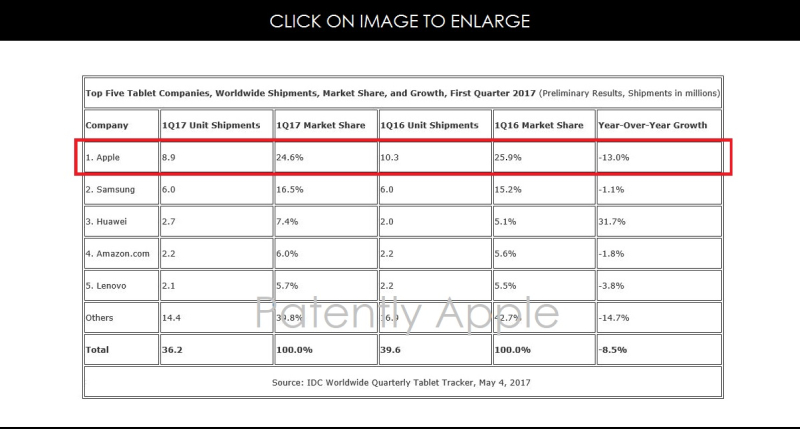 IDC reports that "Apple experienced its 13th consecutive quarter of year-over-year shipment decline despite being the market leader in 1Q17. Apple's results show that it is not immune to the changing dynamics of industry and consumer demand, part of which is due to the ongoing success of its other product lines.

2016 was Apple's first full year of iPad Pro shipments, which included the launch of the smaller screen lower-cost 9.7 inch version. This product line quickly elevated Apple to the top of the growing detachable tablet market segment, and IDC believes Apple is in a good spot to remain competitive at the top of this segment despite using a 'mobile OS' while many of its competitors are entering the space with Windows-based devices.

The report further pointed out that "Huawei was the only company among the top 5 to experience positive growth in 1Q17 with shipments of 2.7 million, which was up 31.7% from the 2.0 million shipped in the first quarter a year ago. Like Samsung, Huawei has also slowly migrated its tablet portfolio from an Android slate tablet lineup to now include a mix of Windows-based detachable devices. It is somewhat unclear how serious Huawei is about going down the Windows device route, but given this quarter's growth while others decline it seems the mix strategy and tablet play is working for the company.

In the bigger picture, IDC notes that "The tablet market is comprised of two different product categories, which are headed in very different directions as noted by IDC in the past. Devices offering a first-party keyboard, which IDC refers to as detachable tablets, continue to grow for the most part. Many of these devices have quickly grown to resemble products that IDC refers to as traditional notebook PCs or laptops. The other product category is slate tablets (those lacking this keyboard option), which saw shipments peak in 2014 and is now in a steep decline that IDC believes will continue throughout the forecast period."

The detachable segment is likely to experience a spike in Q4 with the introduction of the new Windows 10 on Arm detachables that Huawei, Lenovo and others have committed to selling right out of the gate this fall. Collectively, the Windows 10 Arm based systems could challlenge or even overtake Android tablets and begin its war directly against Apple's iPad. This will be an interesting development to keep an eye on this fall.

In the end, Apple's iPad remains the leading tablet globally in Q1 2017 despite showing losses for thirteen straight quarters. That's a polite way of saying the iPads has been in decline for more than three years. A trend that that may indicate that consumers aren't much interested in this category anymore.

In the short term, Apple did launch a new 9.7-inch iPad in April and this may help iPad sales in calendar Q2 from falling for the fourteenth consecutive quarter. I'm sure Apple must be wondering where the bottom of this decline is. Apple thinks it's just a longer refresh time frame for tablets, but it may be that the public just doesn't care for this device any longer as phablets continue to deliver ever larger displays.