Home Archives Contact Us Subscribe Twitter MeWe Facebook Patently Mobile
Chinese News Site Reports there will be no Delay in the Launch of Next-Gen iPhones
A new Supply Chain report Claims that Foxconn is likely to announce a Next-Gen Display Plant in the U.S.

Apple Makes their Official Pitch Tonight for their new Store within a Restored Carnegie Library Building in D.C. 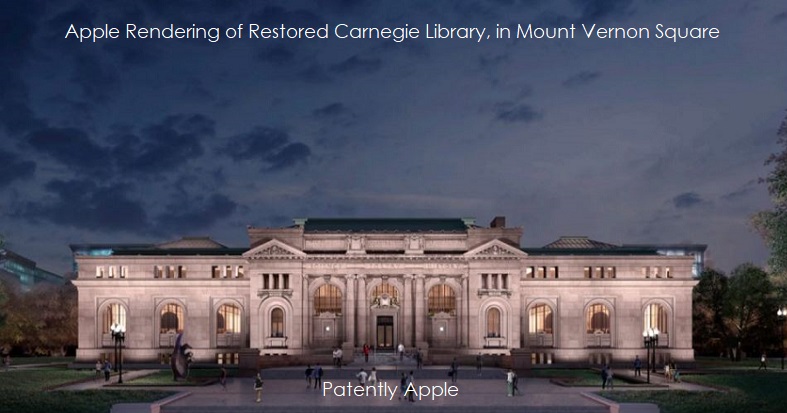 Steve Jobs minted Apple as a top American retailer by designing crisp, modern stores with designs reminiscent of the company's products. Glass boxes and aluminum panels abounded. But as Apple moves to turn its stores into experiences — places for concerts, art exhibitions and photography classes — the tech giant has begun to pursue distinctive, yet familiar buildings its customers might admire as well.

A new report by the Washington Post notes that "In Washington, the company has set its sights squarely on the Carnegie Library, in Mount Vernon Square. One of thousands of libraries built nationwide with funds donated by steel tycoon and philanthropist Andrew Carnegie, it opened in 1903 as the first desegregated public building in the city.

There, Apple officials say they plan to restore the building to its original grandeur and outfit Carnegie as a place to hold a slate of free, open-to-the-public concerts, art exhibitions, workshops for teachers and coding classes for children.

Trial programs in other Apple stores have included presentations from community artists and photographers, as well as concerts and talks from bigger names, such as when hip-hop producer RZA led an "Art of Beatmaking" session at the company's Brooklyn store last fall. The company plans to release a fuller slate of events around the country this month.

The ultimate goal, of course, is to sell more iPhones and iPads. Where the Carnegie Library once housed the city's book collection, Apple plans a 'Genius Grove,' a tree-lined sales floor where company reps will demonstrate how to maximize Apple products for music, photography or other passions. What long ago were reading rooms would become places to browse and sample Apple products.

'This is a way of creating a reason to come to the store, to touch and feel our products, but also to have an engaging experience with someone who is passionate about the same thing,' said B.J. Siegel, Apple Retail's senior design director.

The concept is of course going international as well. Back in January Patently Apple posted a report titled "One of Apple's most Innovative and Technologically Advanced Stores is coming to Piazza Liberty in Milan Italy." In that report we noted that the Milan store is going to be one of the most innovative and technologically advanced Apple Stores in the world with the construction of an amphitheater open to the public and functional to host cultural events [as noted in the concept drawing below]. 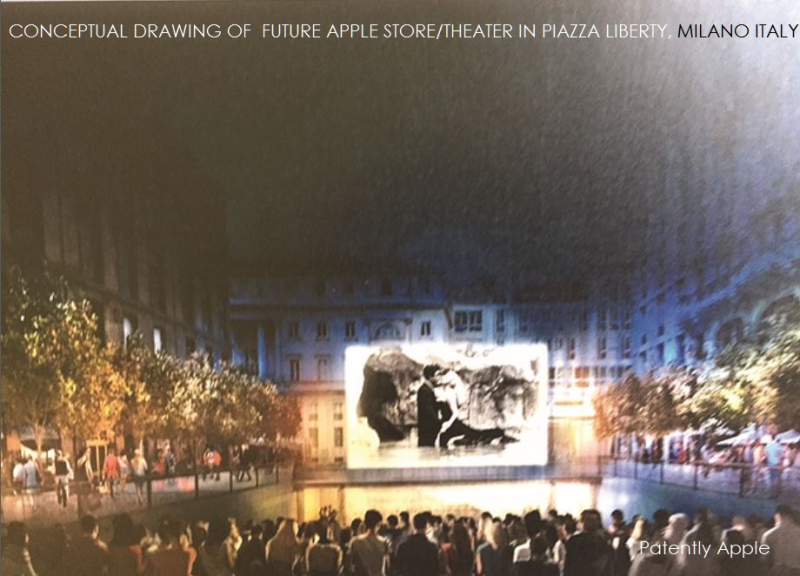 Gregory A. O'Dell, president and chief executive of Events DC, said he was 'working to support Apple with its plans as well as our partners in the Historical Society of Washington D.C.'" You could read much more on this here.