Apple Invents Future USB-C, Lightning Connectors to light up in the Dark while Providing Status Information 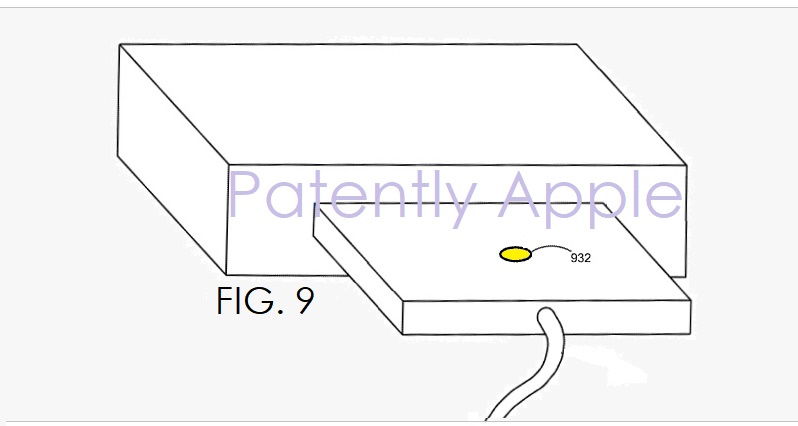 Today the US Patent & Trademark Office published a patent application from Apple titled "Illuminated Printed Circuit Boards for Connectors." The new system lights up the connector's end so as to act as a light guide making it easier for users to connect a connector to their devices in a dimly lit or dark environment. The system will also provide users with status information and more importantly, will confirm to the user that a device like a power adapter is an official Apple product or a counterfeit.

Apple notes that when a user is in a dark room at night and wants to insert a connector insert into a connector receptacle on an electronic device, it's not always that easy.

Considering these drawbacks, what is needed are connectors that facilitate the mating of corresponding connectors, particularly when ambient lighting is limited. It may also be desirable that status information for a device housing a connector receptacle may be easily determined. 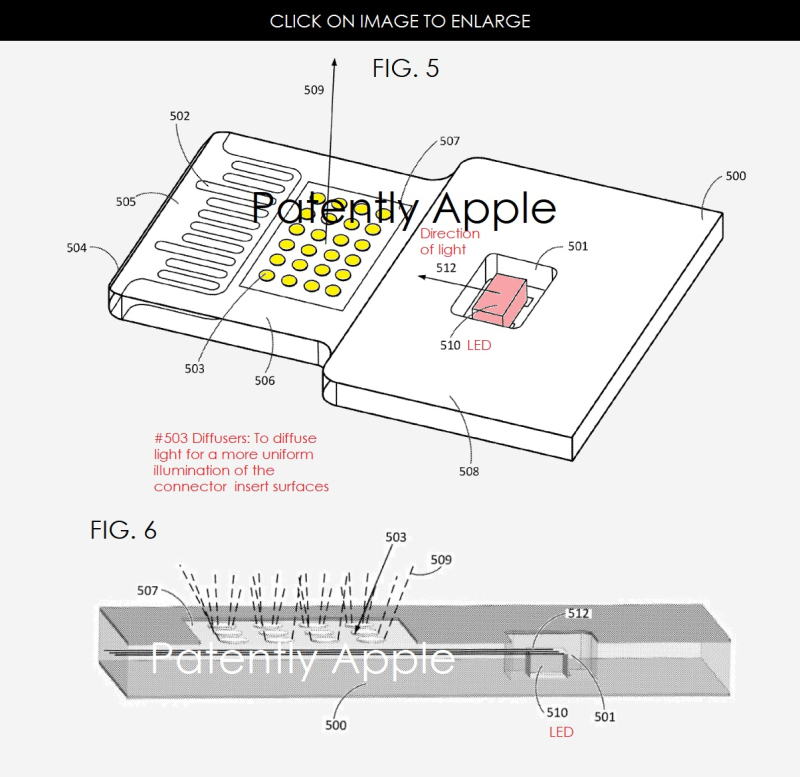 In Apple's patent FIG. 5 noted above we're able to see a tongue for a connector may be formed of a material that is at least partially transparent or translucent. For example, tongue 500 may be formed of an epoxy, glass fibers in an epoxy, or by using other materials; FIG. 6 illustrates a side view of the connector tongue shown in FIG. 5. Again, light-emitting diode #510 may be located in recess #501.

In the embodiments above, one or more LEDs may be included in, on, or proximate to a connector tongue. The illumination provided by these one or more LEDs may convey visual information to a user. The visual information may be provided to a user through the particular color of light, by a particular sequence of a light pulses, by a sequence of various colors turning off and on, or some combination thereof.

The circuitry may drive the one or more LEDs to a color or pattern that indicates the connector insert has been mated to the connector receptacle. This may then be visible to a user to confirm that a connection has been made. Examples of such a connector system are shown in the following figures.

The range of connectors covers USB-C, Lightning, Thunderbolt and others that could be used in conjunction with all of Apple's major devices such as the iPhone, iPad, Macs and more.

Last October Patently Apple posted a report titled "Apple Sues Mobile Star for Selling Counterfeit Power Adapters and Charging Cables through Amazon." Apple explained in their lawsuit that counterfeit products could lead to fires and other risks to the public.

In today's patent revelations we see that Apple isn't relying on a lawsuit to fix the problem, they're going to invent a safety system built into genuine Apple connectors that could determine if a device they're connected to is actually a genuine Apple product as advertised.

Apple notes in their filing that "In these and other embodiments of the present invention, other types of data may be conveyed using this or similar connector systems. For example, authentication, identification, or other types of information or data may be transmitted between an electronic device housing the connector receptacle and a remote circuit.