Earlier today Patently Apple posted a report regarding Apple acquiring their third AI Company in three years to advance Siri and beyond. This week we also posted a report titled "AI Wars are almost reaching Fever Pitch with new Home Devices and Apple Fans look to WWDC 2017 for Apple's Response." Independent Digital Assistant-centric devices aimed at advancing the smart home are going to be a huge market over time. Interestingly the US Patent & Trademark Office published a patent application from Apple this week that revealed real advancements coming to future applications for Siri beyond today's iDevices and Mac. Apple introduces us to the concept of Siri on a user's iDevice communicating with an automated system hub that is a discrete entity. Apple provides many examples but in one case, the home based digital assistant can be associated with the user's door. The digital assistant using advanced facial recognition can identify who is at the door. The user can tell the home based Siri to open the door to let his girlfriend in, even if he's not a home. But if a stranger comes to the door the assistant can snap a photo and send it to the owner's iPhone seeking instructions on what to do with the unexpected visitor. The messaging is done through iMessage. Without a doubt, Siri is going to rapidly advance in many directions going forward and adding a new AI company this week just illustrates how Apple is plowing ahead in this area to keep Siri in tune or ahead of competitors like Alexa, Cortana, Bixby and others.

Jumping right to the core of this invention, Apple's patent FIG. 7D noted below illustrates an architecture designed for advanced virtual assistant interactions. 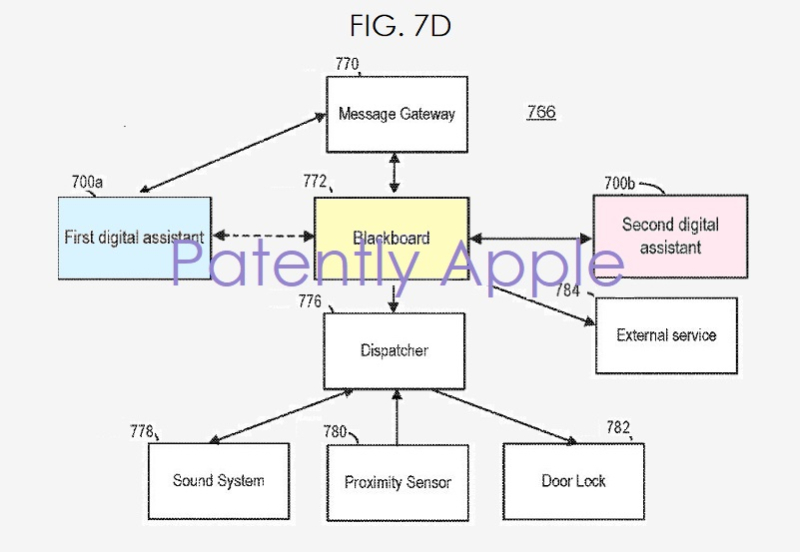 In an example shown below in patent FIGS. 8Y and 8AA we're able to see that there could be a future 'Smart Home' application/digital assistant, as a second digital assistant. 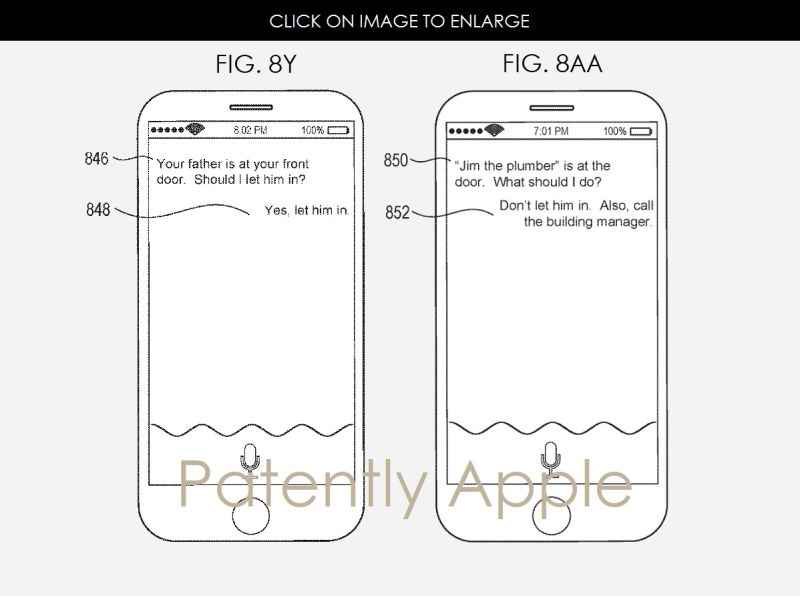 Apple then adds a twist to the scenario. Apple notes that "a visitor other than Tomas has arrived at the door. This is an exception to the plan.

A message will be displayed on the display of Pierre's iPhone: "'Jim the plumber' is at your front door. What should I do?" Pierre is not expecting a plumber, and is surprised one would want entry to his apartment at 8:00 p.m. Referring to FIG. 8AA above, Pierre tells the digital assistant, "Don't let him in. Also, call the building manager."

The digital assistant 700b then leaves the door locked. Further, the digital assistant calls the building manager, and informs the building manager that "Jim the plumber" is at the door. The plan generated to let Tomas in when he arrives is not complete, because Tomas has not yet arrived. However, the exception has been handled by refusing entry to the apartment to "Jim."

Apple goes on to describe a selected "plan template." For instance, when Pierre's father finally arrives and is let in, Pierre may have assigned his home digital assistant to start playing his father's favorite tunes over his home stereo system automatically. The plan may then dictate that when Pierre's father arrives, a reservation is to be made at a favorite Chinese restaurant so that the table should be ready once Pierre gets home. The reservation isn't to be made until Pierre's car is within 10 miles from home.

Is that sophisticated enough for you?  Yes, Siri has gone to college in this next round of advancement and it will be able to handle very detailed game plans set by its owner.

During Apple's Q1 2017 financial conference call Apple's CEO Tim Cook made a big pitch for Siri at Home by noting that "I'm personally using HomeKit accessories and the Home App to integrate iOS into my home routine. Now when I say good morning to Siri my house lights come on and my coffee starts brewing. When I go to the living room to relax in the evening I use Siri to adjust the lighting and turn on the fireplace. And when I leave the house, a simple tap on my iPhone turns the lights off, adjusts the thermostat down and locks the door. When I return to my house in the evening as I near my home, the house prepares itself for my arrival automatically by using a simple geofence. This level of home automation was unimaginable just a few years ago and it's here today with iOS and HomeKit."

Siri for the home is one of the key areas that Apple is obviously focusing on and we're likely to hear more about this at their upcoming WWDC event next month.

In April a patent surfaced revealing an echo-like device being able to coordinate specific tasks between varying iDevices. We also learned that a new security feature was coming to Siri that involved understanding the owner's voice over others. Earlier this month Apple's VP worldwide marketing Phil Schiller weighed in on an echo-like device should have a display.

All in all, patents supporting advancements to Siri are on the rise of late and today's report illustrates how sophisticated AI will be getting over time. The one sophisticated example provided in this patent filing is just the tip of the iceberg of what's to come.

Apple originally filed their patent in 2015 under application 62252835. One of the inventors listed on the patent filing is none other than the former Chief Scientist at Siri Inc. who joined Apple in May 2010. Considering that this is a patent application – the timing of such a product to market is unknown at this time.