The U.S. Patent and Trademark Office officially published a series of 76 newly granted patents for Apple Inc. today. In this particular report we cover two new granted patents relating to a future Apple head mounted display device. The two patents add new claims that reveal a few features like VR capabilities using a camera on the headset or associated with an iPhone. The headset will be able to operate an iPhone at a different resolution than normal. The patent claims note that the headset will work with Siri and that Apple's headsets could come in two form factors. 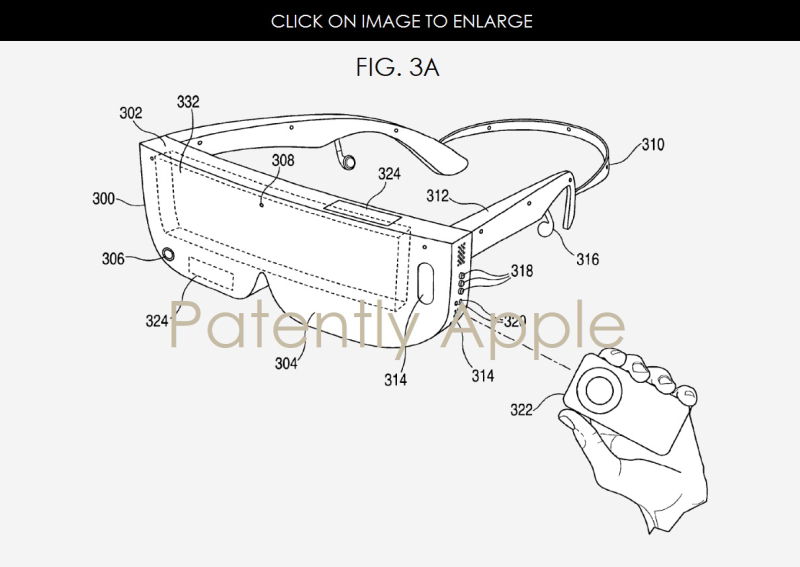 Apple's patent figure 3 illustrates a headset that could be controlled by a remote but could also include a voice recognition module which of course now means Siri.

Apple was granted their first patent for this in February 2015.

Today Apple was granted two patents for their headset. Each of the two new granted patents cover extended patent claims which provide new legal coverage for the device and differs from the original patent application and original granted patent. Patent claims act as a legal warning to those inventing a similar headset that Apple has claims to certain features. Infringing said claims for their invention could land them in court for patent infringement.

So what important new claims was Apple granted today by the U.S. Patent Office? Below is a random list of new elements Apple was granted related to their future headset.

In granted patent 9,646,573 Apple puts emphasis on the iDevice in the headset. The focus is on providing a future iPhone to operate in two distinct modes, with one distinctly for when it's in the headset. When in the headset the iPhone display will operate at a different resolution.

Patent Claim #2: The cellular telephone defined in claim 1, wherein the display is configured to divide an image frame into a left image frame and a right image frame while operating in the close up viewing mode.

Patent Claim #2: The head-mounted apparatus defined in claim 1, wherein the processor is configured to overlay the captured image over a portion of the image based content in the second mode.

In patent claim #25 Apple notes that "The head-mounted apparatus defined in claim 14, wherein the support structure has a goggles form factor.

In patent claim #26 Apple notes that "The head-mounted apparatus defined in claim 14, wherein the support structure has a glasses form factor.

This is the first round of patent claims that directly hints at Augmented Reality. Secondly, today's headsets like Gear VR hold a smartphone in place for the headset whereas Apple's will require that the phone be connected to a connector in the headset. While Apple doesn't elaborate on this in their granted patents, it's obvious that Apple will be able to add functionality to the iPhone through the headset connection. It could a specialized VR chip or means of changing the resolution of the display or adding specialized haptics. It's clear that Apple is taking a different take on a future headset.