Home Archives Contact Us Subscribe Twitter MeWe Facebook Patently Mobile
While IDC sees little to no Growth for iPhones over the Next Five Years, they may be missing the obvious
AMD Introduces Threadripper at Computex 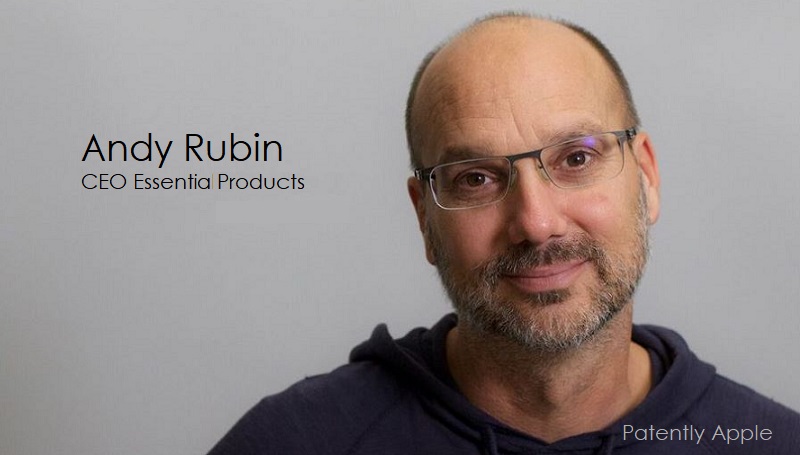 In January Patently Apple posted a report titled "A Next-Gen Smartphone Designed by Ex-Apple and Google Engineers will Launch Later this Year." Our report covered Foxconn's investment in Essential Products Inc., as well as the trademark and patent filings by Essential. 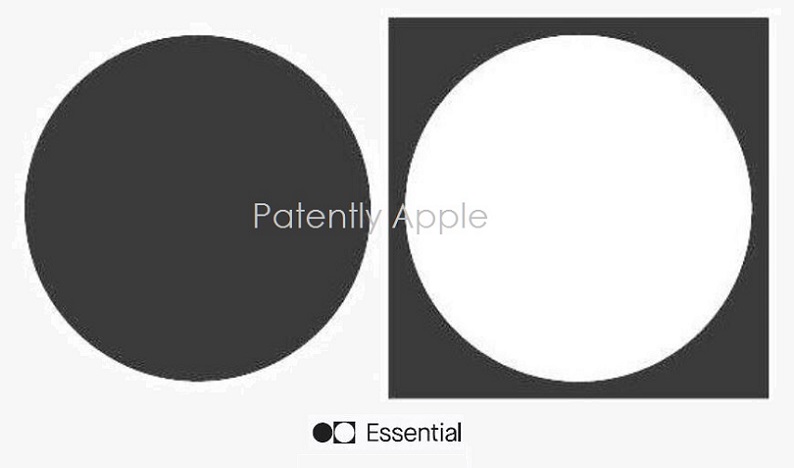 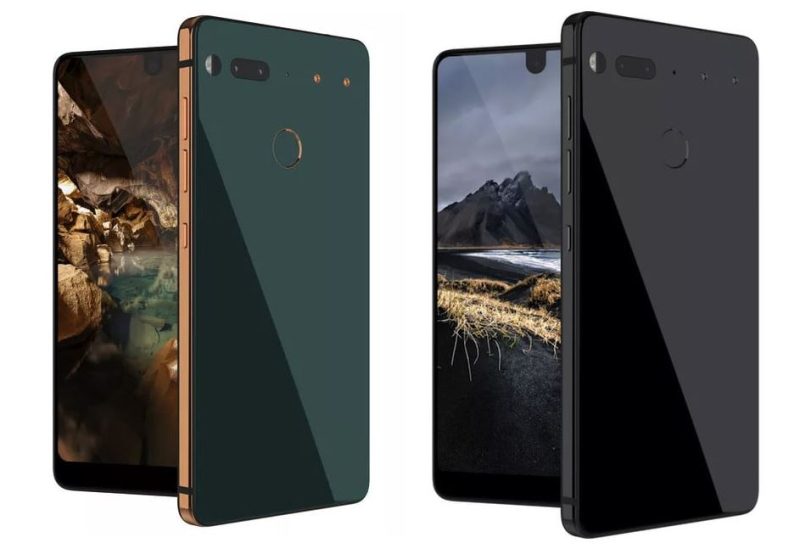 Essential Phone has an impressive screen which extends almost to the bottom of the phone where it does meet a thin bezel. The display oddly wraps around their selfie cam which sits at top-center of the phone. There are two camera lenses on the back, a 13-megapixel color lens and a second monochrome lens and they're flush with the back panel, something I wish Apple could reproduce.

The display measures 5.7 inches and has a 2560 x 1312 pixel resolution, with a 19:10 aspect ratio which differs from both the Samsung S8 and LG G6 smartphones which provide an 18:9 aspect ratio. The 'Phone' uses a Snapdragon 835 processor with 4GB of RAM powers the device, and 128GB internal storage is on hand for media.

The 'Phone' offers a backside fingerprint sensor that looks like the iPhone 8's back side images that we've seen to date. The 'Phone's is made of titanium and ceramic material, something that Apple has recently shown an interest in, according to a recent patent filing..

The power button and volume controls are on the right hand side of the new Essential 'Phone which also uses a 3040mAh battery with fast-charging keeping the phone powered up. Other specifications include Bluetooth 5.0, a USB Type-C port, and a wide range of international 4G LTE band support.

One of the cool accessories for the Essential 'Phone' is their inexpensive 360-Degree camera as noted below. It's something you'd think Apple would have done. While we'll have to wait for a review of this new accessory for the 'Phone' – on the surface it's a great idea to bring to market. 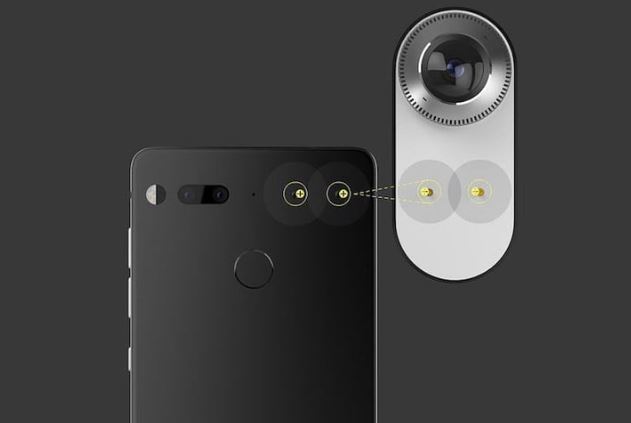 The camera reportedly attaches to the back side of the 'Phone' using magnets. The camera has two 12-megapixel lenses that can shoot 4K resolution, 30fps video and four microphones capture sound in 3D. Support for live streaming will be included, too.

The camera, if ordered with the phone only costs $50 but $200 if purchased separately. If it really works, that's a sweet deal for a 360-Degree camera for the phone. Then again, it's awfully bulky (see photo below) and not as slick as they make it out to be in the previous photo above. 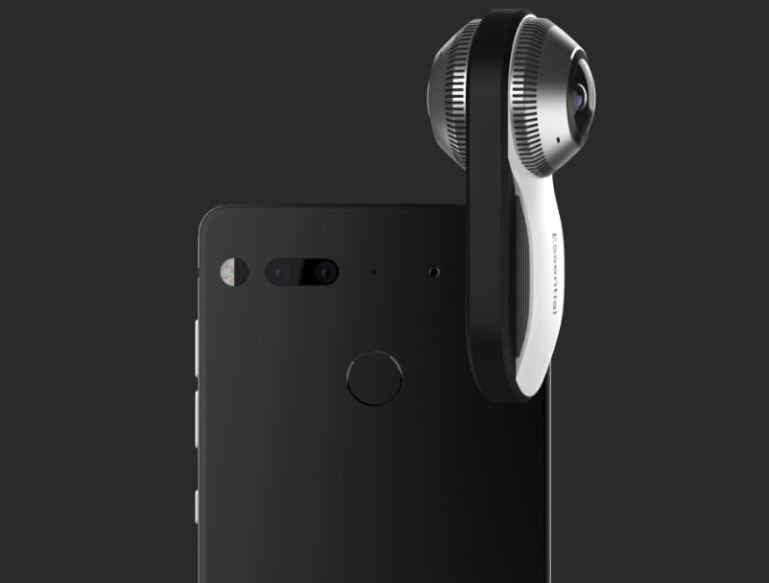 Essential also got their message out before Apple's WWDC that they'll offer another accessory called the 'Essential Home' which is a speaker with a voice assistant for the home that offers a round display on the top surface. 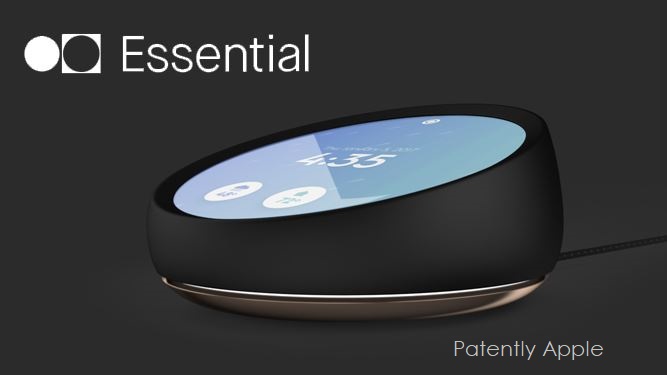 In a Wired article today, Jason Keats, the company's head of product architecture said that if Essential took off and sells 50 million units in its first quarter on the market that they'd be totally screwed. Essential simply cannot produce that many phones. That's the point. Keats added that "We've gone after technologies and methods of manufacturing that aren't designed to support 50 million devices." Keaton wants Essential to think like a high-end watchmaker, not a commodity gadget builder.

The Wired article provides those that are interested in Essential Products with a little company background and overview.

Another product that will launch later this summer is the company's Phone dock as illustrated below. Their new dock Features a pair of magnetic pins on the back of the device, this so-called Click cordless connector will hook up to Essential's 360-degree camera and its Essential Phone Dock (pictured below). The same magnetic connector used for the phone is used in securing the 'Phone' to the new dock.

The concept sound like the smart connectivity idea that was rumored for the iPhone 8 as noted below. 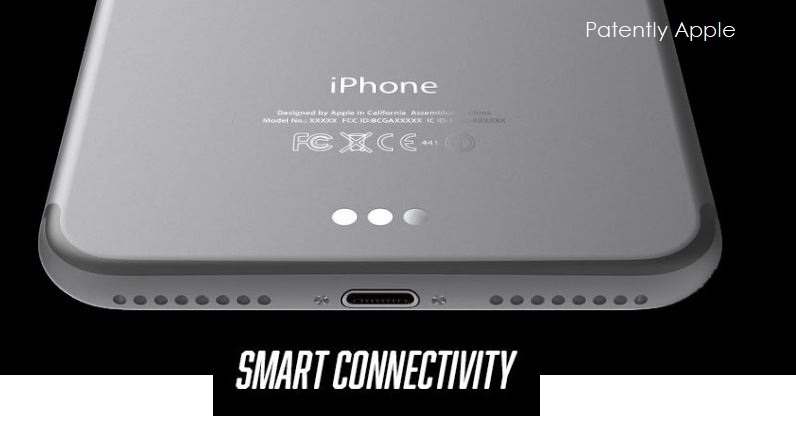 Of course we're months away from a head to toe review of the new Essential 'Phone' but in the end it's just another Android Phone yet one that could hurt Samsung, LG and others in the U.S. market. Between Google's Pixel phone and now the Essential 'Phone' it's bound to hurt foreign Android brands. One thing for sure, it's not going to ding the iPhone in any way, so we can cheer on Rubin's new phone if it weakens Samsung, the company that most Apple fans despise.

Lastly, if you have the time, remember to tune into the Mossberg interview tonight either on our site or on YouTube that may reveal another twist or two about the 'Phone' or other plans that Essential Products may have up their sleeve.