Smartphone data for Q1 2017 shows that the big Story is the Stunning growth from Oppo, Huawei and Vivo 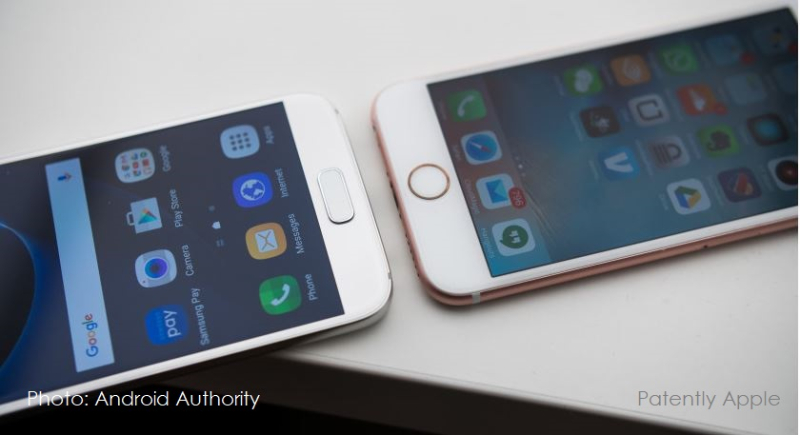 Earlier this month Patently Apple posted a report titled "Samsung Tops Smartphone Shipments Chart in Q1 due to Flooding the Market with Massive Low-End Model Shipments." While TrendForce was first out of the gate with smartphone data for Q1 2017, we always like to cover IDC's reports for the record. Today, according to preliminary results from IDC, smartphone companies shipped a total of 347.4 million smartphones worldwide in the first quarter of 2017 (1Q17). In light of what might seem like a slowing market, consumers continue to show demand for smartphones and OEM flagship hype seems as strong as ever. Worldwide smartphone shipments grew 4.3% in 1Q17, which was slightly higher than IDC's previous forecast of 3.6% growth.

According to IDC, "Apple remained essentially flat with shipments reaching 51.6 million units in the first quarter, up slightly from the 51.2 million shipped last year. The strong holiday fourth quarter carried into the month of January as the larger iPhone 7 Plus returned to stock across most channels in numerous regions. Apple introduced a refreshed iPhone SE with more storage capacity (32GB and 128GB) that puts the mid-tier device in line with the rest of the iPhone portfolio. The Cupertino-based giant also refreshed its flagship smartphone by bringing (Product)Red over to the iPhone which paints both the iPhone 7 and 7 Plus in a new red finish. Finally, rumors of a special edition 10th anniversary iPhone continue to grow as a pending new design, screen size, and performance upgrades all look to be in the works for the fall." 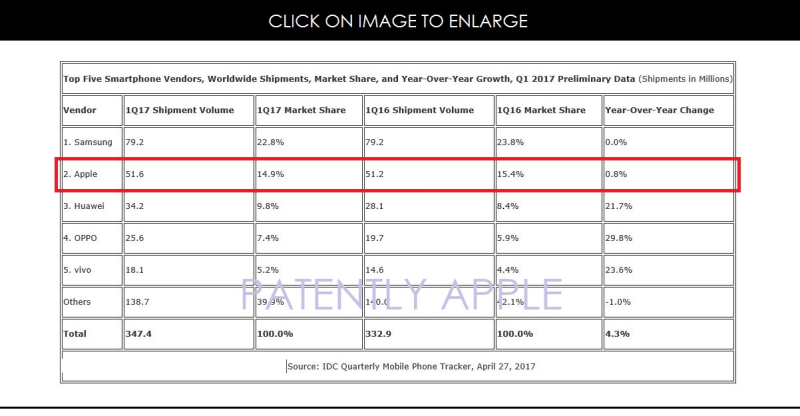 The report further noted that "Samsung regained control as the leader in the worldwide smartphone market despite a flat first quarter (0% year-over-year growth). Substantial discounts on the Galaxy S7 and S7 edge helped move last year's flagships as they make way for the new S8 and S8+. Outside of the high end, the product mix continues to shift toward more affordable models. The J-Series and A-Series drove significant volumes in both emerging and developed markets thanks to flagship-like design at more affordable price points. A refreshed A7, A5, and A3 earlier this quarter, along with a recently updated J-Series, and new flagship S8/S8+ should give Samsung a well-balanced portfolio across all regions in the second quarter. An early positive response to the recently launched S8 and S8+ looks promising as it may have finally put Samsung's Note 7 fiasco to bed."

In February Patently Apple posted a report titled "Local Chinese Smartphone Brands Kick Apple to fourth Spot in Q4 and it'll be Tough for Apple to Reverse." Yesterday we followed up with a report titled "For Q1 2017, Apple Remains Stuck in Fourth Place in China's Smartphone Market." The big three smartphone vendors in China, Huawei, Oppo and Vivo are now rapidly rising in the global race.

IDC's chart shows us that only the big three in China showed tremendous growth year-over-year with Oppo at 29.8%, Vivo at 23.6% and Huawei at 21.7%. In contrast Samsung broke even and Apple grew 0.8%. Ouch!

Huawei entered the U.S. market in January and we'll have to see how this will help Huawei's growth for all of 2017. Apple may be able to hold onto second place this year with a strong line-up of iPhones for Q4. They'd likely do better if they make the iPhone SE a little more competitive by adding a 5" display like 99% of their competitors are selling these days in their mid-tier and low-end models.

But in the end, the story is really about the big three Chinese vendors growth and how they may roll over today's leaders in the not too-distant-feature. All of this quarter's smartphone growth came from China's big three vendors leaving Apple and Samsung close to registering growth losses. In unit numbers Apple is still in second place with a sizeable lead over Huawei. But it's the Year over Year growth stats that are threatening. Apple at 0.8% vs. Huawei at 21.7%

Apple's move into Augmented Reality and new form factors may be able to keep the iPhone in the race if not in the top five for years to come. But they better hurry because the growth rates from these Chinese vendors are collectively becoming a tidal wave that may be too strong to stop.