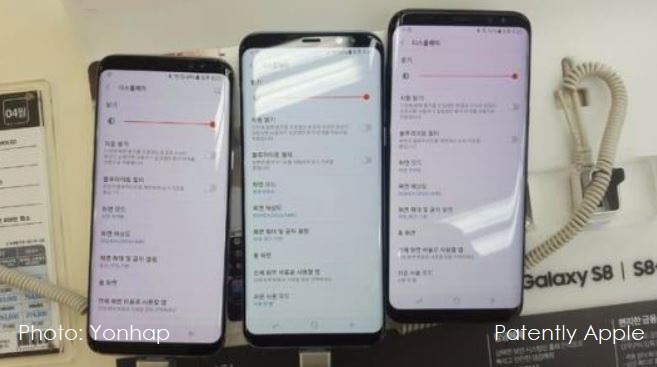 With their Note 7 nightmare behind them, Samsung is off to a good start with over 1 million pre-orders, almost doubling the pre-orders of the S7. That's the good news; now comes the bad news. According to a pair of Korean tech site reports today, "Samsung Electronics' Galaxy S8 is facing complaints from some customers who say the display panels of their new phones have a reddish tint. The problem may be caused by the color balance of organic light-emitting diode panels." Our cover graphic from Yonhap news clearly illustrates the problem.

The report further notes that "Some customers who pre-ordered the Galaxy S8 wrote on online communities that their new phones have a reddish screen that did not improve even after correcting color display settings.

One user said, 'After I read articles that there are many reddish panels, I checked mine. I was also unlucky. Should I change it?'

Samsung said, 'It is not a quality problem and it can be adjusted with the phone itself. If the color still appears to be reddish, customers can change it at the service center.'

However, some users still said they were not able to adjust the color because the display panel was already optimized.

'The reddish tint may be caused by a color balance problem after Samsung used deep red AMOLED to strengthen the red,' said an industry watcher who declined to be identified.

Therefore, Samsung developed deep red OLEDs to strengthen the color and the reddish tint might have resulted due to the new process.

Apart from the reddish tint issue, Samsung's new Galaxy S8 is facing complaints from global consumers about the use of its Bixby button being limited only to the operation of voice assistant Bixby.

Bixby had drawn attention as the button on the left side of the phone is said to be capable of being compatible with Google Assistant, the camera and other apps. However, Samsung has reportedly prevented the Bixby button on its Galaxy S8 from being used to perform other functions. Some US tech media said Samsung wants to lock up Galaxy users within the Bixby system to gain an edge over Microsoft Cortana, Apple Siri and Google Assistant.

Amid growing complaints, Samsung's Philip Berne said in a subsequent tweet, 'I can't say for sure why this behavior changed, but I can say that we are not supporting remapping that button.'"