Home Archives Contact Us Subscribe Twitter MeWe Facebook Patently Mobile
While Apple is set to hit the Restart Button for the Mac Pro, it's the Smartphone Revolution Part 2 that's far more important
Apple Unlikely to win their Case against Swatch for the use of 'Tick Different' on their Watches 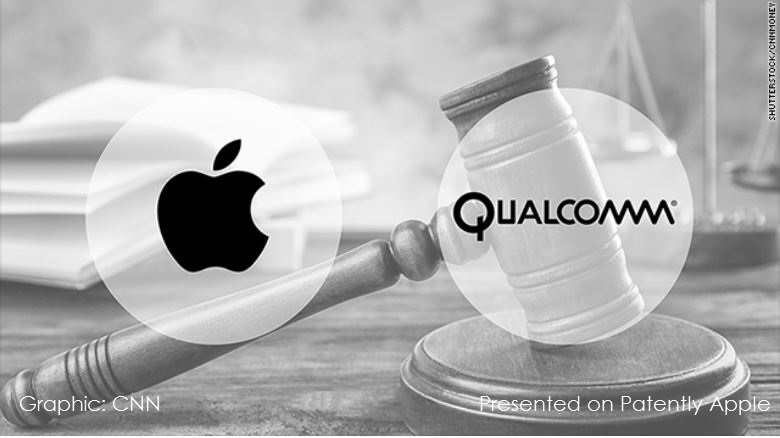 In January Patently Apple posted a report titled "Apple's full lawsuit against Qualcomm Comes to Light Revealing Secret Licensing Agreements and more" which provided a full copy of the lawsuit that was very lengthy and detailed. Apple complained in their lawsuit that Qualcomm was gouging them on licensing. Apple noted in their January filing that "What this means in the case of the iPhone® is that when Apple engineers create a revolutionary new security feature such as touch ID, which enables breakthrough technologies like Apple Pay, Qualcomm insists on royalties for these and other innovations it had nothing to do with and royalty payments go up. When Apple spends billions redefining the concept of a smartphone camera, Qualcomm's royalty payments go up." Apple provided a graphic in the lawsuit that they claimed illustrated the "complex web of contracts, some of them secret contracts that underlie Qualcomm's scheme of relentless extortion and govern the two companies' business relationship." 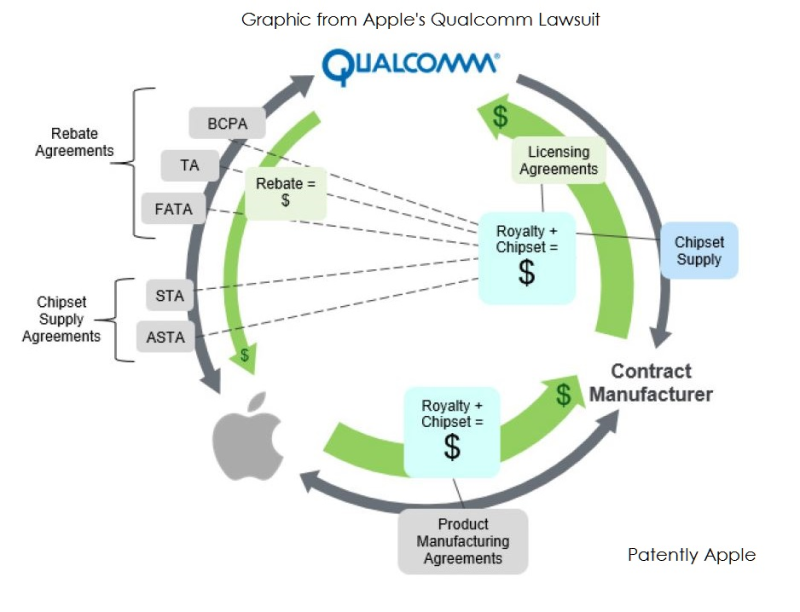 Yesterday Qualcomm finally filed an answer and counterclaims lawsuit to the Apple lawsuit stating that Apple breached agreements and mischaracterized agreements and negotiations with Qualcomm; that they encouraged regulatory attacks on Qualcomm's business in various jurisdictions around the world by misrepresenting facts and making false statements.

Qualcomm's formal statement noted that "Over the last ten years, Apple has played a significant role in bringing the benefits of mobile technology to consumers with its popular products and services. But Apple could not have built the incredible iPhone franchise that has made it the most profitable company in the world, capturing over 90 percent of smartphone profits, without relying upon Qualcomm's fundamental cellular technologies. Now, after a decade of historic growth, Apple refuses to acknowledge the well-established and continuing value of those technologies. It has launched a global attack on Qualcomm and is attempting to use its enormous market power to coerce unfair and unreasonable license terms from Qualcomm. We intend to vigorously defend our business model, and pursue our right to protect and receive fair value for our technological contributions to the industry."