Foxconn to make 'Capital Intensive' Investment in the U.S. that will be revealed at a Special Event this Summer 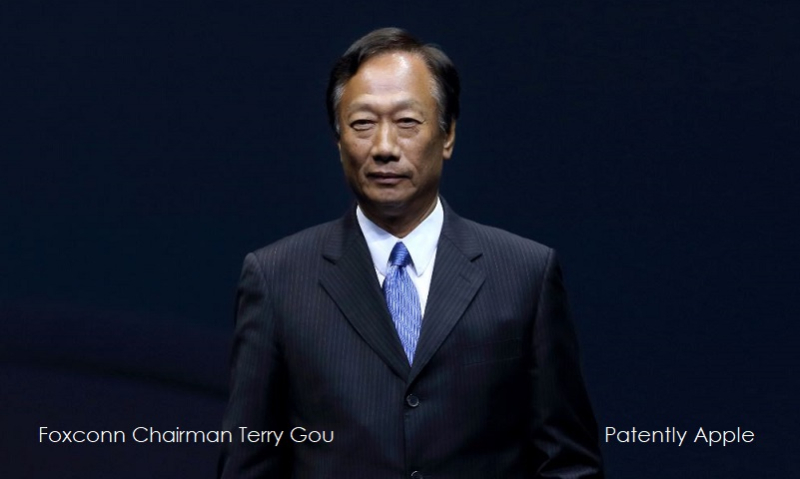 On Thursday Patently Apple posted a report titled "Foxconn's Chairman Terry Gou and President Trump are set to Meet Next Thursday." We noted in the report that The impression was that the meeting would be next Thursday considering that the Nikkei report was dated Friday April 28, 2017." We're learning this morning that in fact Foxconn's chairman was in Washington the very day of our report.  We're further learning that as Terry Gou exited the White House on day two at the White House that he told the press he's planning to make a "capital-intensive" investment in the United States.

More specifically, Gou stated that "We are planning a number of investments in America. This project will include both capital-intensive and skilled labor-intensive and high-tech investment."

When asked how much money he plans to invest, Gou said he wanted that to be a White House announcement. "We're still not final yet," he said. "I think we will share with you in the summer, maybe a few weeks."

Asked if he had met with Trump, Gou said: "I don't want to say yes or no. After we select the location, the White House will make an announcement."

Gou also visited the White House on Thursday, along with senior company executives including Vice Chairman Tai Jeng-wu, who is also chief of Japan's Sharp Corp, in which Foxconn holds a two-thirds stake.

The Nikkei further reported that Foxconn said in a statement after Gou spoke: "We can confirm that we are engaged in discussions with officials at various levels of government regarding our ongoing plans to significantly increase our investments in the United States."

In January Patently Apple posted a report titled "Foxconn Plan Close to Completion for a Massive U.S. Plant in the U.S. to Make LCD Displays and More." In that report we noted that a Sharp executive stated that Hon Hai Precision Industry (Foxconn) and its Japanese subsidiary Sharp have begun studying the possibility of building a liquid crystal display panel plant in the U.S. The plan is "on the table," the executive said. "We will make a decision carefully." Considering that Vice Chairman Tai Jeng-wu, who is also chief of Japan's Sharp Corp, was with Gou at the White House likely indicates that at least one of the deals does in fact revolve around a Sharp display plant. 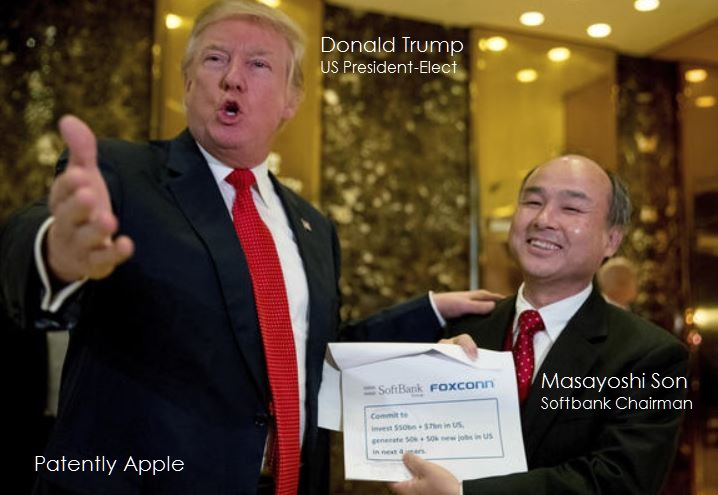 The photo above was used in the January report clearly showing that when Softbank's Chairman met with President-Elect Trump, the proposal Mazayoshi Son was holding up to the cameras did indeed show Softbank and Foxconn which we were first to point out.

LCD's are still important in the TV display business. We noted back in December that Terry Gou deliberately dropped Samsung as a Sharp customer that sent Samsung into a panic for months. Sharp supplied LCD's to Samsung.

Sharp had announced a goal of roughly doubling current global sales of its Aquos-brand LCD TVs to 10 million units in fiscal 2018.

In the end, the mystery is in Gou revealing that they're planning "a number of investments in America." Will any of these investments relate to Apple? Only time will tell.