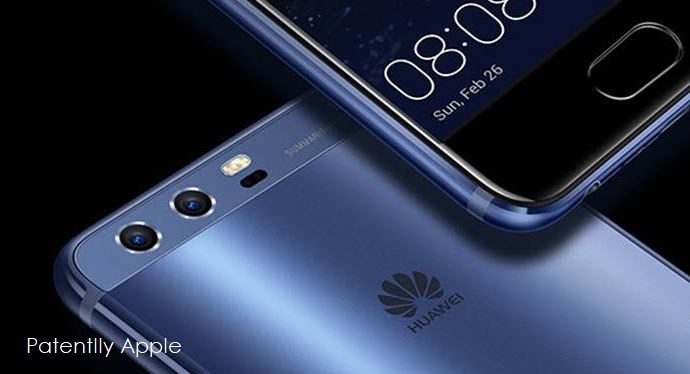 In February Patently Apple posted a report titled "Local Chinese Smartphone Brands Kick Apple to fourth Spot in Q4 and it'll be Tough for Apple to Reverse." Did Apple do any better in Q1 2017? Bluntly, no. A new report posted by Canalys this week revealed that Apple is stuck in fourth position.

After spending two quarters in second place, Huawei moved past Oppo to recapture the lead in China's smartphone market in Q1 2017. The Chinese smartphone giant, which launched the P10 and P10 Plus during MWC, shipped close to 21 million units to secure an 18% market share.

Canalys Research Analyst Lucio Chen stated that "China's smartphone market continues to grow, with shipments increasing by over 9% year on year this quarter. But there is a clear indication that the market is consolidating. The top three vendors are pulling away at the head of the market, accounting for more than 50% of shipments for the first time this quarter.

In the corresponding quarter a year ago, Huawei led with Vivo second and Oppo fourth, together accounting for 42% of the market. Xiaomi took third place but has since fallen to fifth behind Apple, shipping just over 9 million units in Q1 2017."

While it's a long shot, Apple's iPhone 8 line-up may be able to reverse this trend and put Apple back into at least the top three vendors if not the top spot. But it's a long shot no matter how you look at it.

With Samsung recently roaring back as the number one smartphone vendor worldwide due to their flooding the market with their mid range J Series smartphones, Samsung may be able to gain a top five spot in the Chinese market by year's end by battling it out in the $185-240 segment of the market which is the hottest segment that Apple doesn't participate in.

So with that in mind, it's going to be a tough year for Apple to retain their fourth spot or make a leap higher in the Chinese market. While Apple's iPhone used to be the champ in both volume and profits, those days are close to over if Apple refuses to make their iPhone SE more competitive. Though in the end, Apple will continue to be the smartphone's profit champ with no one even close to challenging them.