In September 2015 Patently Apple posted a report titled "A Mysterious Meeting between Apple and the Department of Motor Vehicles (DMV) took Place Last Month." At the time the report noted that California's DMV was developing regulations for the eventual deployment and public operation of autonomous vehicles. Those rules would establish requirements that manufacturers would have to meet to certify that their driverless vehicles had been successfully tested, meet safety criteria, and be ready for consumers to operate on public roads. Business Insider notes in a report today that the DMV has confirmed that Apple had been granted a permit to test self-driving cars in California. The official list of those on the Autonomous Vehicle Tester Program are noted below.

The DMV notes that the list shows the order the permits were issued, with Apple being last. However, the DMV doesn't list the actual date Apple received their permits. 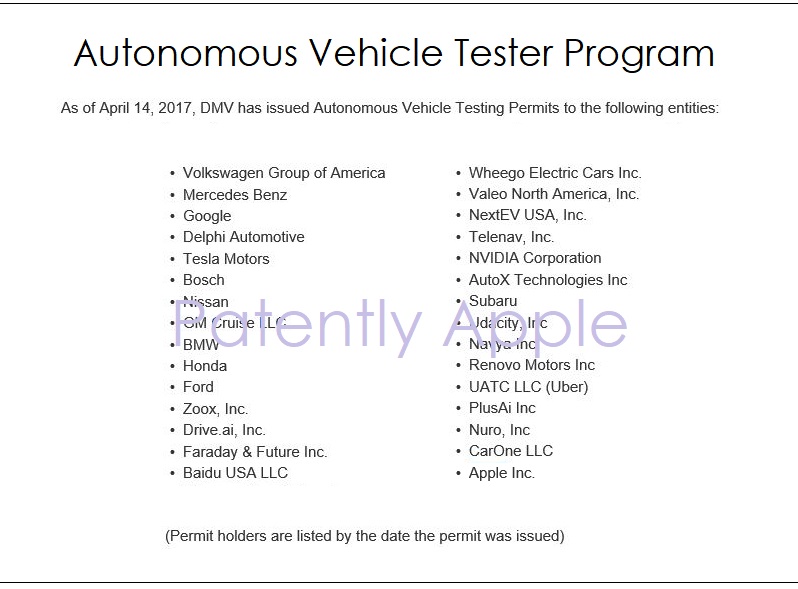 Without knowing the date of Apple's issued permit, we're unable to tell if this is old news. Patently Apple posted a report last September titled "Apple Refocuses Project Titan towards Advanced System Software and away from a Dreamy iCar." Reportedly Apple's Bob Mansfield was taking Project Titan in a new direction, focusing on the softare and/or OS to power autonomous vehicles.

So while today's revelation is interesting, it still doesn't answer any relevant questions about Project Titan's current status or exact nature. Naturally Apple will keep the Project Titan as secretive as possible until it's ready for public consumption.