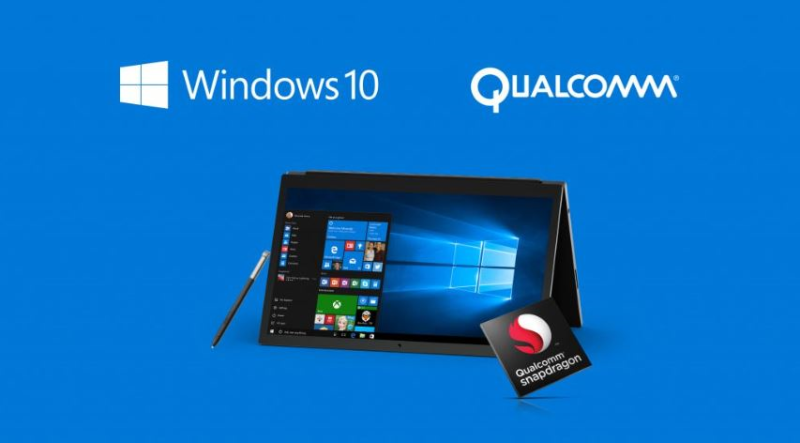 Last December Patently Apple posted a report on Microsoft and Qualcomm teaming up to create ARM based Windows 10 Notebooks and 2-in-1 devices for 2017. The collaboration is to spawn a new breed of tablets and notebooks that promise to diversify the software giant's technology base and give the chip maker access to new markets. The partnership will result in an update of Windows 10 that runs on a chip in Qualcomm's widely used Snapdragon line of processors, the first Windows 10-Snapdragon pairing. Microsoft already has Windows designed for ARM processors on Apple's iPad. The new devices will allow users to access the net wirelessly like tablet do today with the chip already built-into the architecture. Users only need set up an account online. Today we learn that the new devices are on track to hit the market during the holiday quarter in the fourth quarter.

A new supply chain report today states that "ARM has recently revealed that a Snapdragon 835-based Windows 10 notebook will be launched in the market by the end of 2017 and some market watchers believe ARM and Microsoft's partnership is expected to focus on conquering the weakness in software ecosystem and could bring pressure to Intel.

Some upstream suppliers believe the new ARM-based notebooks could start with Microsoft's new Surface line this fall and from Lenovo's new 2-in-1 device."

It was rumored in December that Huawei, the number one smartphone maker in China was on board with this project as well.

With ARM gradually picking up its pace and Microsoft's partnership with Qualcomm, Intel is expected to face fierce competition from both sides.

I think that Intel knows that Microsoft opening the door to ARM processors for notebooks could change the tide away from Intel processors over time. Intel announced the end of their 20 year run of the Intel Developer Forum (IDF) earlier this month which reveals that PC's are no longer Intel's future.

The race to 10nm processors begins this fall. Intel is supposed to be introducing their 10nm chips aimed first at notebooks. So it's going to be a very interesting war. Intel is likely to win the first round or two, but over time the writing might be on the wall.

If successful, the new Windows 10 devices with ARM processors could begin to erode Apple's lead in tablets over time. Microsoft may have finally found the right formula to make that happen.