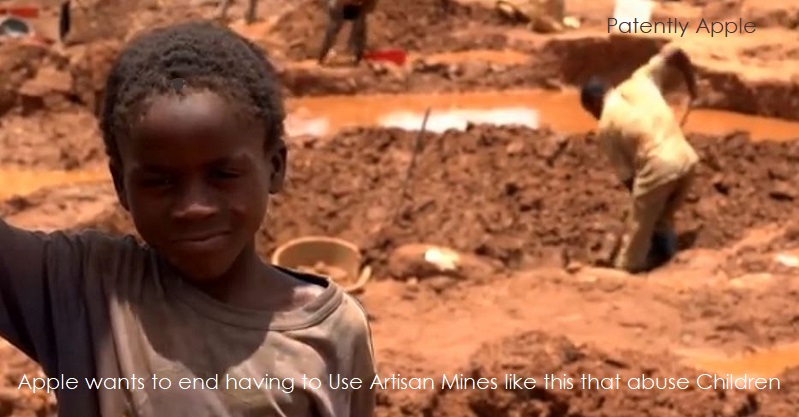 In March Patently Apple posted a report titled "Apple Caught in another Controversial Story about Supporting Slave and Child Labor in Congo." The report showed a BBC documentary of the artisan mines in the Congo using child labor that supply companies like Apple needed materials for their iDevices. These kinds of documentaries aren't good for Apple's image of being a green company. So now they're going to do something to change the reality of supporting artisan mines by making a new pledge, even though they don't know how they'll actually accomplish their lofty goal.

According to Vice News Canada, "Apple has one of the most aggressive sustainability and recycling programs in tech, but it still pulls plenty of metals and toxic rare-earth materials out of the ground to make iPhones, iPads, MacBooks and other products.

That's about to change. The company is set to announce a new, unprecedented goal for the tech industry, 'to stop mining the earth altogether.'

The announcement, part of Apple's 2017 Environment Responsibility Report released Wednesday, will commit the company to making devices entirely from recycled materials such as aluminum, copper, tin, and tungsten. But there's one hiccup: Apple doesn't know exactly how it's going to make that happen.

Apple's Vice President of Environment, Policy and Social Initiatives and a former head of the EPA, Lisa Jackson, told VICE News during an exclusive visit to Apple's environmental testing lab on Monday that 'We're actually doing something we rarely do, which is announce a goal before we've completely figured out how to do it. So we're a little nervous, but we also think it's really important, because as a sector we believe it's where technology should be going.'"

The report further noted that "Apple's latest environmental achievements are notable, but they will likely be eclipsed by Apple's new goal of giving up mining altogether. That's because even though recycling phone components can have its own environmental impact, the kind of mining that Apple relies on is notorious for its labor abuses, and the pollution it discharges into local waterways," as our report in March pointed out in detail. For more on this interesting article, check out the full Vice News Canada report here.