Last Thursday the US Patent & Trademark Office published a series of six patent applications from Apple covering their new Touch Bar for the MacBook. The patents also describe a Touch Bar destined for the iMac keyboard which likely means an accessory as well. The patents are divided into two distinct camps. The first group covers Apple's 'Adaptive Input Row' which is marketed as the Touch Bar. The second group covers 'restricted-access buttons' marketed as Touch ID, built into the right end of the Touch Bar. 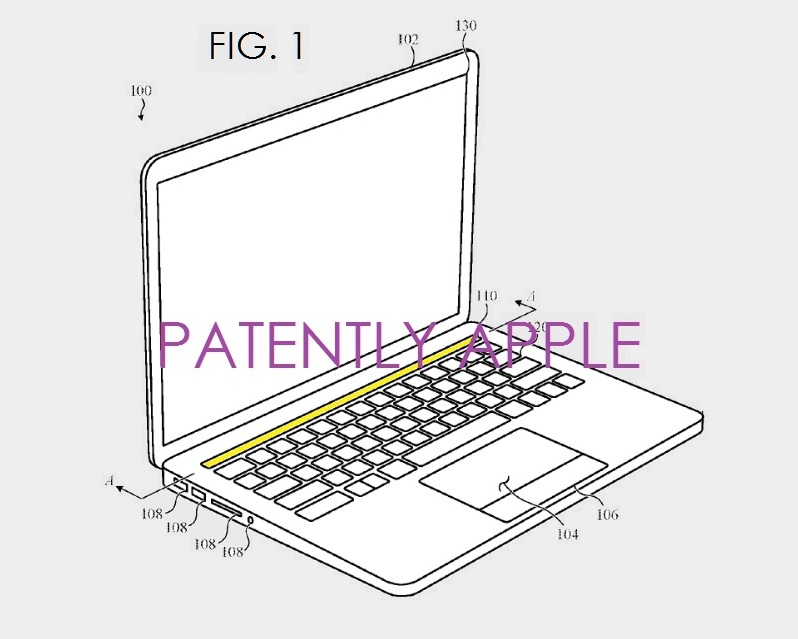 The Touch Bar changes automatically based on what you're doing to show you relevant tools you already know how to use — system controls like volume and brightness, interactive ways to adjust or browse through content, intelligent typing features like emoji and predictive text, and more. And for the first time, Touch ID is available on a Mac, enabling instant access to logins and fast, secure online purchases with Apple Pay.

Some example embodiments are directed to an adaptive input row having a display that is configured to produce an adaptable set of visual indicia that correspond to an input mode of the adaptive input row. The indicia on the display may correspond to one or more of the following: a hardware-dependent input mode used to control one or more devices or hardware elements; a software-dependent input mode used to control one or more aspects of a software program being executed on the device; a user-defined mode that is configurable by the user; and other input mode examples which are described herein. The display may be used to present a set of static indicia, one or more animated indicia, or a combination of static and animated indicia.

Some example embodiments are directed to an input row stack that includes a display positioned below a cover. The input row stack may also include one or both of a touch sensor and a force sensor. The touch and/or force sensor may be used to determine the position of a touch along the length of the row. In some implementations, the input row includes a touch-sensitive region that extends beyond a display region. The extended region may be used to perform dedicated functions or operations.

As noted in the patent figures below, the patents cover general Touch Bar interfaces which highlight that physical F-Keys are now replaced by an multitouch OLED display. One interface noted below as FIG. 2J shows that the Touch Bar could detect a contoured or curved gesture. No explanation is given as to what that gesture will apply to in the future. 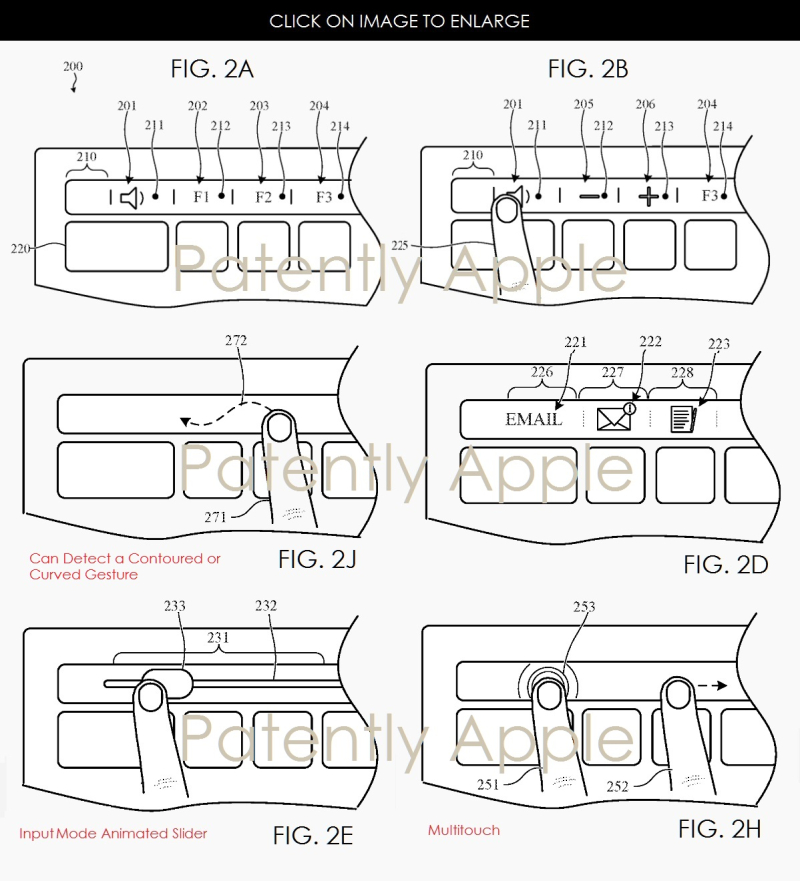 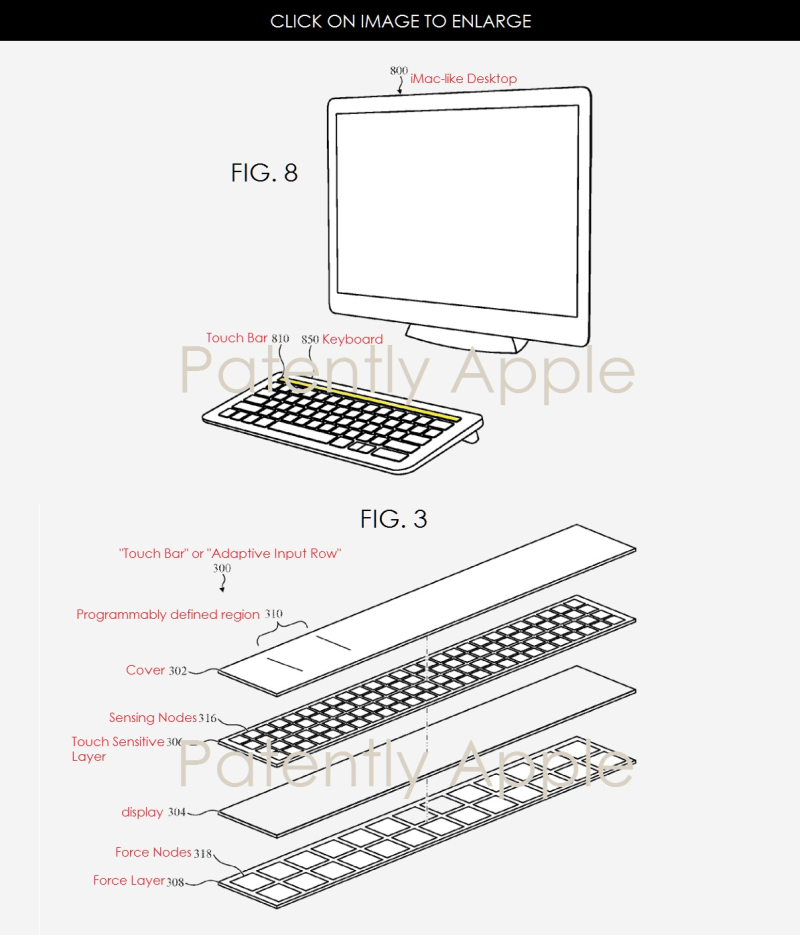 Apple's patent FIG. 3 noted above depicts a simplified exploded view of the Touch Bar referred to in the patent as an "adaptive input row" #300 having both a touch sensor layer #306 and a force sensor layer #308 positioned under a cover #302. As shown in the simplified embodiment of FIG. 3, the touch layer may be positioned between a display #304 and the cover #302. The force layer may be positioned on a side of the display opposite to the touch layer.

In some embodiments, the force nodes #318 are formed from a strain-sensitive material, such as a piezoresistive, piezoelectric, or similar material having an electrical property that changes in response to stress, strain, and/or deflection.

In some embodiments, the force nodes 318 are formed from a capacitive force-sensitive structure that includes at least two capacitive plates separated by a compliant or compressible layer. The force of a touch may cause the partial compression or deflection of the compressible layer and may cause the two capacitive plates to move closer together, which may be measured as a change in capacitance using sensing circuitry operatively coupled to each of the force nodes 318. The change in capacitance, which corresponds to an amount of compression or deflection of the compressible layer, may be correlated to an estimated (applied) force.

Apple's patent application was filed back in QX 201X3. For more details about this invention, click here. Considering that this is a patent application, the timing of such a product to market is unknown at this time.

The second series of Touch Bar patents cover Touch ID integrated into the bar. Apple notes that the invention "generally relates to buttons that incorporate biometric sensors. A biometric sensor associated with such a button can be used by the electronic device to restrict access to features or functionality of the electronic device associated with that button. Such buttons are generally referred to herein as "restricted-access buttons."

Apple makes an interesting point about touch ID not having to be restricted to the Touch Bar. According to Apple, "a shutter button of a camera device can be a restricted-access button. 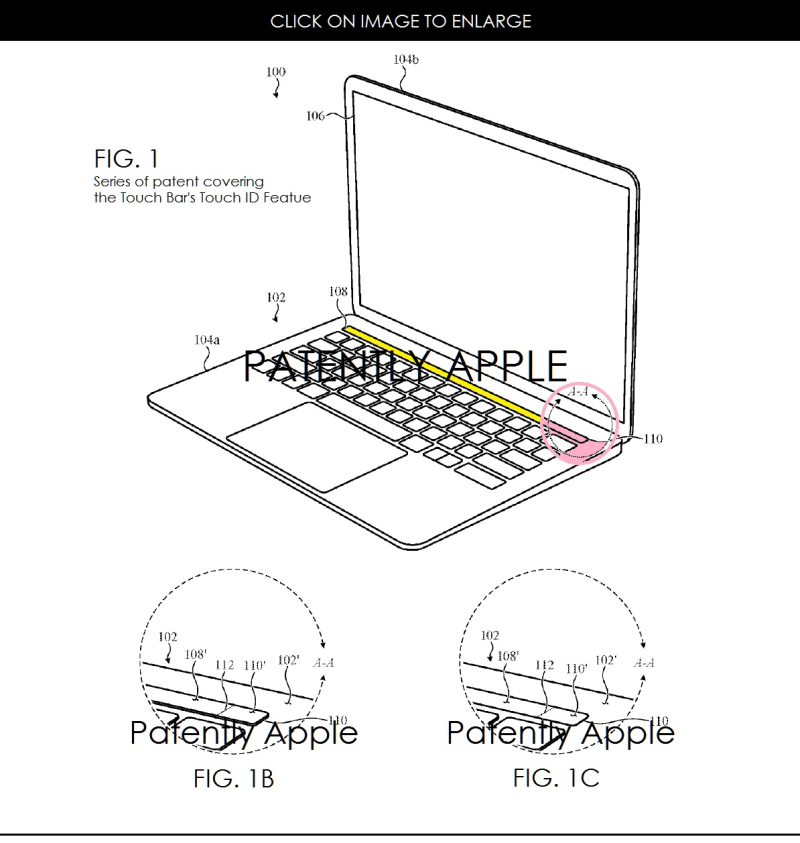 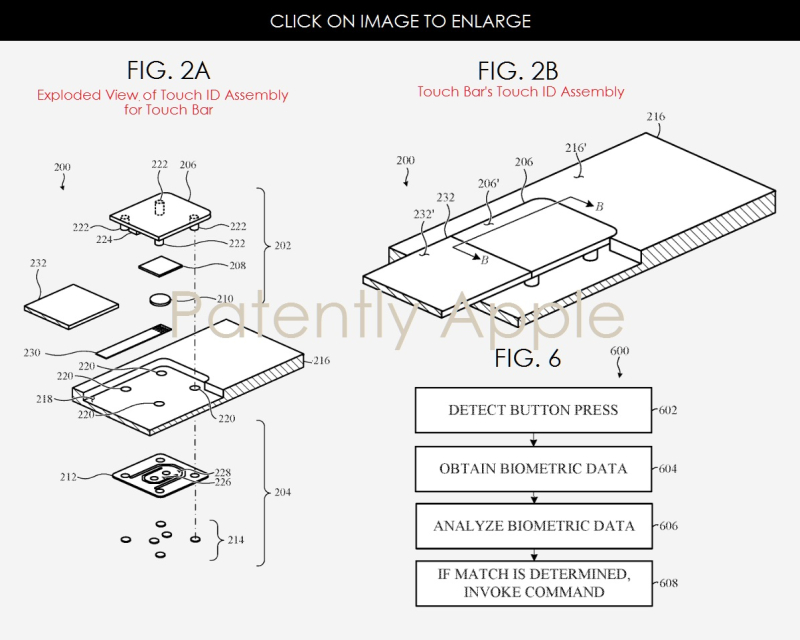