Last week the US Patent & Trademark Office published a patent application from Apple relating to a new Siri function whereby it could intelligently coordinate and pass on a user's request to the appropriate iDevice in the home or office to perform. Today such a request would result in either duplicative or conflicting operations by each of a user's iDevices within the same environment. Apple has created a device prioritization system so that iDevices receiving an instruction for Siri would work in concert with each other to perform a specific task instead of annoyingly duplicating the same action on multiple iDevices.

One of the small bonuses of this patent filing is that an Apple engineer added a Google Home or Amazon Echo-like device that works with Siri in the home as highlighted in the partial patent figure in our cover graphic and again below.

While Apple acknowledges the mysterious device #608 along with others like an iPhone, TV and Apple Watch, they never break out device #608 to describe it in any way. The closest they get is briefly mentioning a "Speaker Dock" later in the filing – though they never specifically link it back to device #608 to confirm it.

Yet clearly we're able to see that it's a speaker-like device that could understand instructions for Siri, so it's not a boom box. It's been rumored for some time now that Apple is working on a device similar to that of Google-Home or Amazon's Echo. Apple's patent figure that surfaced last week confirms, as far as the patent is concerned, a viable concept that's on the table.

Siri to Coordinate Multiple iDevices to perform a Task

In respect to intelligent identification of devices in a multi-device system, Apple provides us with a full example of how it's intended to work.

In some examples, natural language inputs are resolved into one or more tasks by a single device of the electronic devices #602 to #608 identified below as an Apple Watch, an iPhone, a TV (or TV with Apple TV box) and a speaker device like Google Home. 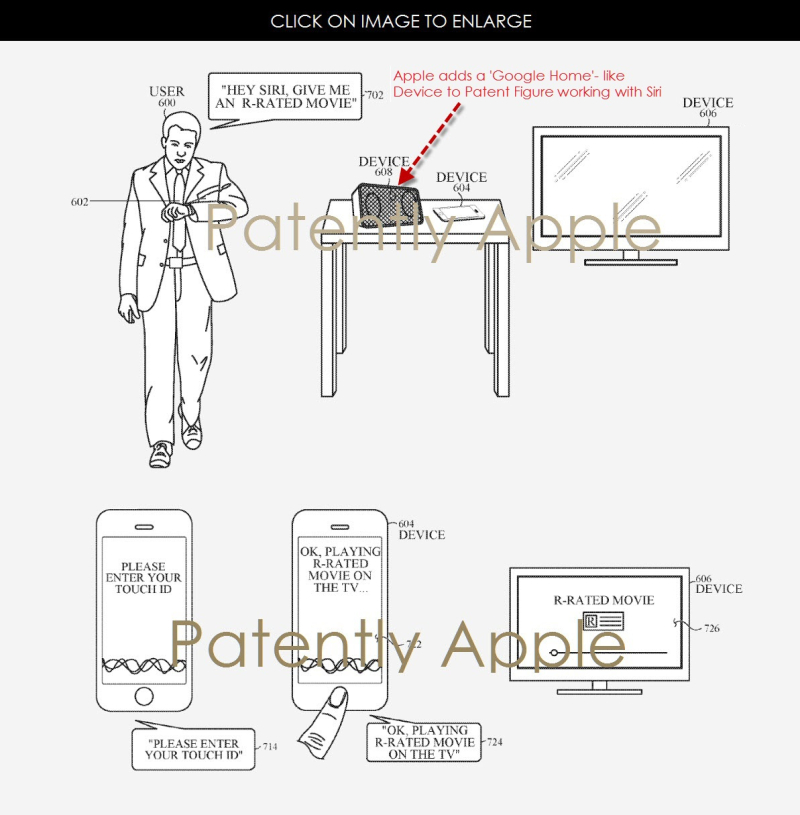 Apple notes that once the spoken audio input has been sampled, one of the electronic devices may be identified as a first device used to determine the task based on the sampled audio input.

The first device used to determine the task may, for instance, be identified based a set of prioritization rules.

By way of example, the first device may be the device whose sampled audio input has the greatest quality of speech, sound pressure level, and/or volume.

In the example shown above, the user is sending a request directly to Siri on his Apple Watch. So in this scenario, the Apple Watch is shown to be the official "first device" within this new prioritized system, as it is closest to the user's audio instruction and thereby the device that is delivering the greatest quality of speech and so forth as set out above.

A task may require it be performed by a device having a particular capability (e.g., functionality). In Apple's scenario above, the task may be directed to provide the user with an 'R-Rated Movie' that requires a device with the best display capability.

Accordingly, Apple Watch may determine which of the user's devices (iDevices, Macs or TV) within a multi-device environment at home would satisfy the display capability requirement.

Because multiple devices may satisfy a task requirement, the second device may additionally or alternatively be identified in accordance with a plurality of prioritization rules.

Uniquely Apple never mentions a set-top-box or the like as they've done in past patent filings in describing Apple TV. In this patent they only list a television. No use getting stuck on that point, but it's noteworthy to remember should they deliver a smart TV sometime down the road.

In some examples, the second device may delay performance of the task. A task may, for instance, include one or more criteria that must be satisfied prior to the task being performed.

As another example, a task may require that a user be authenticated prior to the task being performed. With reference to Apple's patent FIG. 7A noted above, a user may provide an audio input #702 requesting playback of an R-rated movie and the request may be resolved into a task, for instance, by the Apple #602, for playback of an R-rated movie on the user's TV #606.

With reference to Apple's patent FIG. 7B noted above, we're able to see that the user's iPhone #604 may provide input requests #712 such as "Please enter your Tough ID" message on the display.

As illustrated in FIG. 7C, the user may provide a biometric input and the user's iPhone may authenticate the user. In some examples, the iPhone may provide outputs #722 (Ok, playing R-Rated Movie on the TV – in written form) or #724 (in a verbal response) respectively acknowledging completion of authentication and that the R-rated movie is being played on the user's TV. 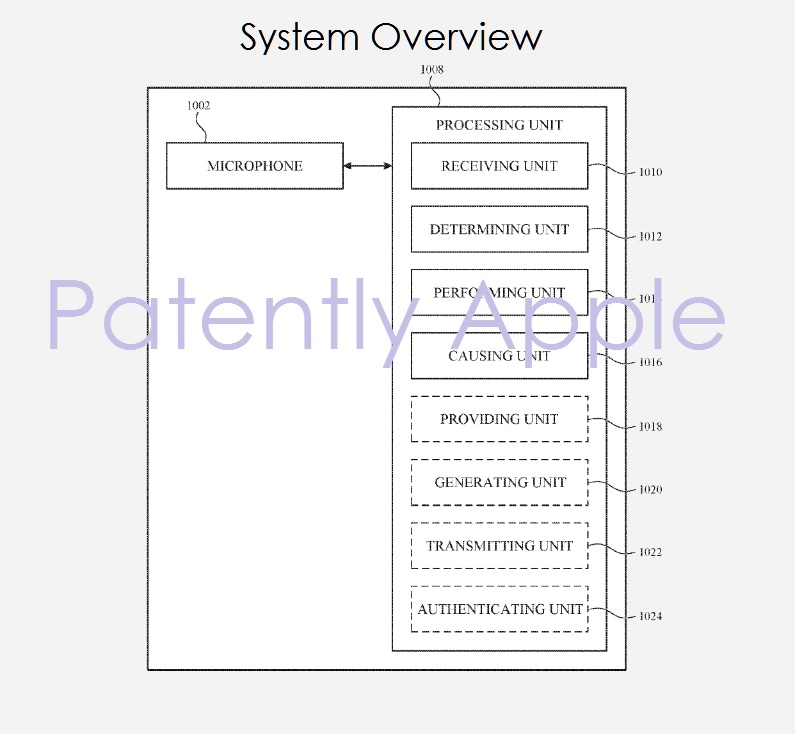 "In some examples, the audio input can represent and/or contain a user request. For example, the audio input may include the request "Play the latest episode of Game of Thrones," thereby requesting playback of the most recent episode of the television show Game of Thrones." It's unclear if this translates to choosing TV episodes only available for a fee on iTunes or episodes available on cable TV.

Lastly, Apple notes that "It should also be recognized that in some examples, text input can be received at instead of audio input. For example, text input representing a user request can be received from the user via a suitable user interface on one or more of the plurality of electronic devices. Examples of suitable user interfaces for receiving text input can include a virtual keyboard, a handwriting recognition interface, a gesture recognition interface, and the like."

Apple has been busy advancing Siri of late with a patent about audio biometrics and a visual system for Siri. Additional Siri specific advancements could be revealed later this week.