In early January Patently Apple posted a report titled "LG & Samsung Set to Announce Future Plants in the U.S. Due to President-Elect Trump's 'Made in America' Pledge." LG's announcement came days after Trump's renewed attack on foreign companies with production lines in Mexico that benefit from cheap labor and unfair trade. Yesterday LG Electronics formally announced that it will construct a washing machine factory with an annual capacity of 1 million units in the US state Tennessee. 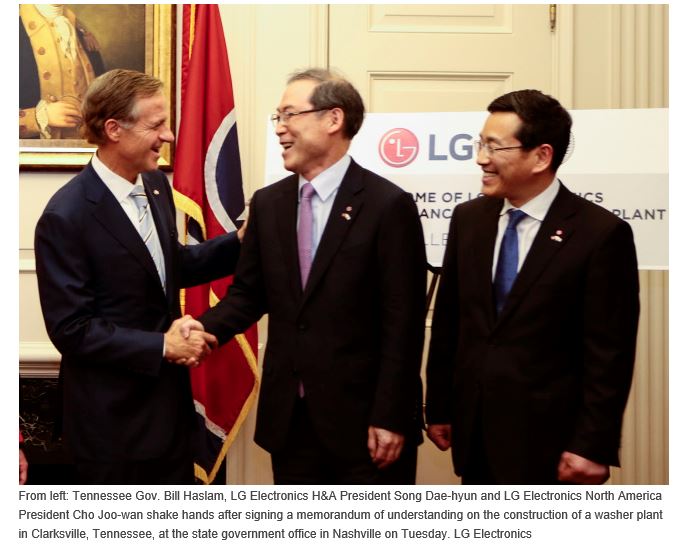 The announcement came less than two months after its Vice Chairman Jo Seong-jin mentioned at the Consumer Electronics Show in January that his company would consider building a plant in the US amid growing pressures from the Trump administration on foreign businesses.

The South Korean electronics maker said it would invest a total of $250 million to complete a new plant in Clarksville, northern Tennessee, with a plan to start operating it from early 2019.

The new factory will produce LG's washing machines customized for the US market, including the Direct Drive motor washers and top-load washers.

"Considering that LG has had higher sales in the mid-Southern regions of the US, having a production facility in Tennessee would give us a competitive edge in terms of flexibly managing supply chains and changes in local demand," the company said in a statement.

On Tuesday, Song Dae-hyun, LG's chief for the Home Appliance & Air Solution division, met with Tennessee Gov. Bill Haslam to sign a memorandum of understanding at the state government office in Nashville.

The new production facility will be constructed on 1.25 million square meters of land. LG plans to break ground for the plant within the year.

"For sustainable growth in the US market, our key strategic market, LG will not only invest in the new production facility but also make additional efforts in localized marketing in order to be the No. 1 brand," said LG Vice Chairman Jo.

There have been concerns that Korea's goods exports could decline if companies rush to relocate their factories to the US, following signs of possible tariff imposition by the Trump administration. The concerns have been fueled by Hyundai Motor Group's announcement in January that it would invest $3.1 billion in the US over the next five years.