Home Archives Contact Us Subscribe Twitter MeWe Facebook Patently Mobile
Did the BBC Create a False Narrative that Apple had to Change their Aids Message for the iPhone 7 'Red' in China?
Apple invents a Unique Air-Tight Protective Case for Future iPhones with a Smart Communications Component

WikiLeaks Reveals CIA's 'DarkMatter' Spyware that had been created for Macs 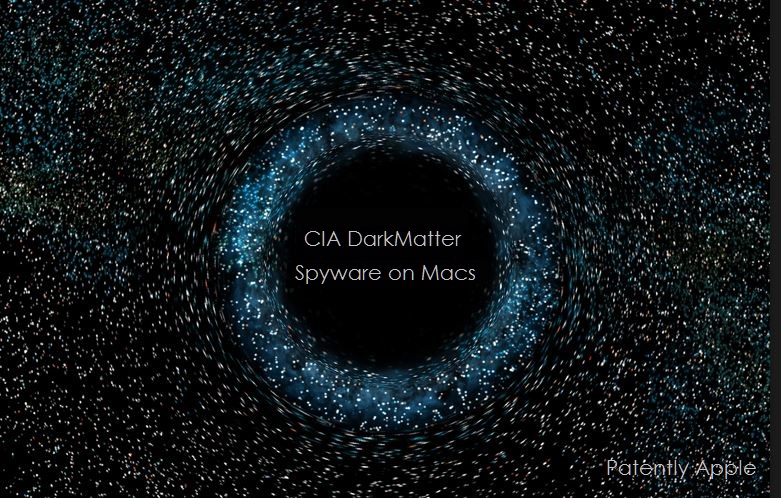 The fresh cache of documents raised eyebrows, describing sinister-sounding software such as "DarkMatter" and "Sonic Screwdriver" that is seemingly hard to detect and can remain on a Mac even after the hard drive is erased. Security experts, though, said these methods have long been known within the community.

The revelation follows a much larger cache of alleged CIA documents related to cyberhacking released earlier this month. The new documents represent a "very considerable effort" to infect Macs and iPhones, including a method for installing iPhone-monitoring software on "factory fresh phones" since 2008, WikiLeaks founder Julian Assange said during an online press conference.

"There are no surprises here," said Dino Dai Zovi a well-known hacker of Apple devices and chief technology officer of software-security vendor Capsule8 Inc. He expects Apple has addressed security issues described in the documents—several techniques were publicly disclosed in 2012, for example.

Apple didn't respond to questions about the new documents with the Wall Street Journal but they did respond to TechCrunch in a statement as follows:

"We have preliminarily assessed the Wikileaks disclosures from this morning. Based on our initial analysis, the alleged iPhone vulnerability affected iPhone 3G only and was fixed in 2009 when iPhone 3GS was released. Additionally, our preliminary assessment shows the alleged Mac vulnerabilities were previously fixed in all Macs launched after 2013.

We have not negotiated with Wikileaks for any information. We have given them instructions to submit any information they wish through our normal process under our standard terms. Thus far, we have not received any information from them that isn't in the public domain. We are tireless defenders of our users' security and privacy, but we do not condone theft or coordinate with those that threaten to harm our users."

TechCrunch concludes by stating that "these appear to be older exploits but government agencies are always seeking new vectors and likely have new methods in place already that Apple is or will be patching out as soon as they are disclosed by researchers or disclosed by legal discovery."

In other words, don't feel safe because some of these vulnerabilities have been patched because it's an ongoing game where the CIA is always ahead of tech companies like Apple. That's why most consumers and even tech leaders like Zuckerberg tape over their device cameras. I was over at my doctors office the other day and every Mac in their office (iMacs and MacBooks) had tape over the cameras. It was funny to see it and funnier when I asked them why they taped over their cameras. The one common reply was: it's creepy.