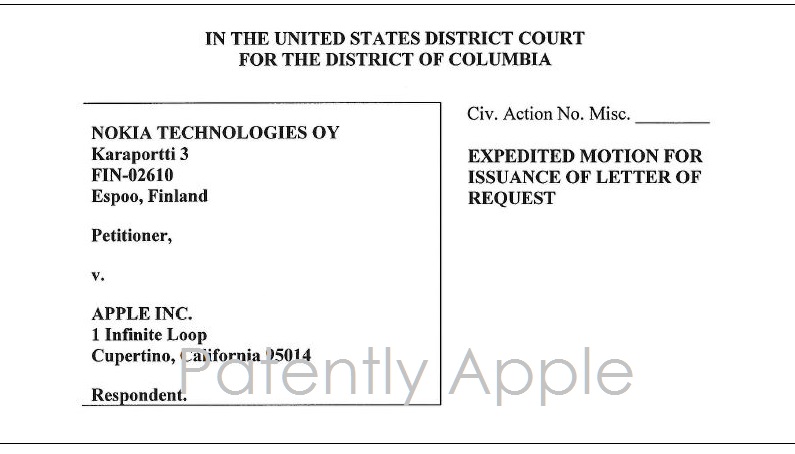 In late December Patently Apple posted a report titled "Apple files a major Antitrust Case against Acacia Research Corporation Pointing to a Conspiracy with Nokia Corporation." That in turn put Nokia into high gear to launch a lawsuit against Apple alleging 32 counts of patent infringement. Days later Nokia struck out against with two additional lawsuits (one and two). To add insult to injury, Nokia sought a cease and desist order against Apple from the U.S. Trade Commission in late January 2017. Today we learn that Nokia is now seeking documents and deposition testimony from Samsung Electronics in their case against Apple. Below you'll find Nokia's formal request to the Court.

"Petitioner Nokia Technologies Oy ("Nokia"), the Complainant in Certain Electronic Devices, Including Mobile Phones, Tablet Computers, and Components Thereof, Inv. No. 337- TA-1038 ("the Investigation") before the U.S. International Trade Commission ("ITC"), hereby moves the Court to issue, under its seal and signature, the attached Letter of Request to the Central Authority of the Republic of Korea. The Letter seeks documents and deposition testimony from Samsung Electronics Co., Ltd., based in the Republic of Korea. The evidence sought by Nokia is highly relevant to the Investigation and unobtainable by other means.

For these reasons, as explained in more detail in the accompanying memorandum, Nokia respectfully requests that the Court assign a Judge to this matter and issue the attached Letter of Request as soon as the Court deems appropriate."

Nokia's request for judicial assistance was filed in the District of Columbia District Court, Washington, DC Office. The Presiding Judge in this case is noted as being Judge Colleen Kollar-Kotelly. .