A new PowerVR graphics architecture from Imagination Technologies called Furian will give a serious graphics boost to future iPhones that will deliver 4K graphics and support augmented and mixed reality applications and headsets that could debut sometime in the Q4 2018 or 2019 time line.

The current iPhone 7 models use Imagination's Rogue architecture which was first announced in 2010. The Furian has already been licensed to device makers and should be available in mobile devices by the end of 2018. Apple modifies PowerVR graphics architectures for the iPhone, meaning the graphics capabilities may also reach its devices the following year or so.

According to PCWorld, "It delivers a 35 percent increase in performance compared to Rogue, and a 70 to 90 percent improvement in gaming. Furian can scale up to 16 clusters, while Rogue scaled up to 12. Furian will drive many GPU generations for Imagination beyond Series8XT.

Chris Longstaff, senior director of product and technology marketing for PowerVR at Imagination Technologies told PCWorld that "We see an architecture that lasts us for a few years."

Imagination shows us in the graphic below that several shifts in technologies and markets since the introduction of Rogue have driven the new architectural requirements of Furian: 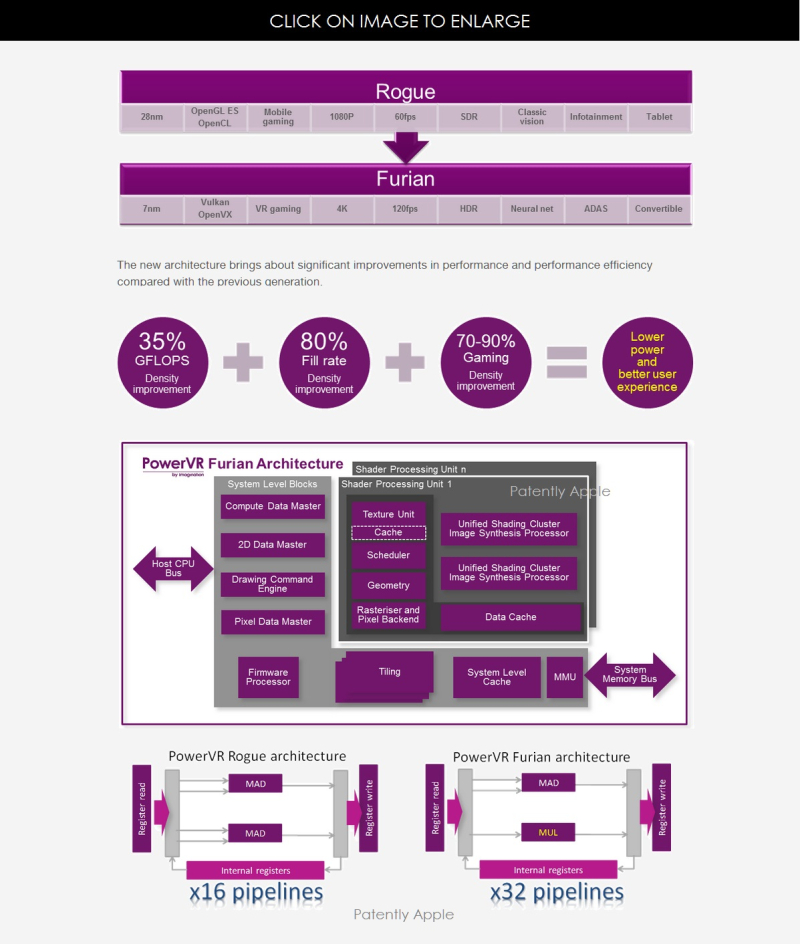 The PowerVR Furian architecture is designed to maintain and widen the performance/mW gap over competing solutions. It is a scalable architecture designed to meet a wide variety of market segments and applications, over multiple generations of products. It ensures ease of implementation, being specifically designed for ease of layout, including support for new sub-14nm process geometries.

Some of the most significant changes have been made in the ALU. These have enabled both an increase in real world performance as well as improving the density. By moving from an x16 to x32 pipeline, the performance is doubled. The specialized ALU pipelines are kept independent from the primary ALU pipes, to prevent contention issues reducing performance.

By creating a scalable, feature rich, power and performance dense architecture, the new PowerVR Furian architecture will power generations of cores. These cores will enable PowerVR to continue leadership in its existing markets such as mobile, tablets and automotive, and also create leading positions in new markets such as AR & VR.