A new IDC report notes that the overall wearables market is expected to return to strong growth after a brief slowdown in 2016 that resulted from delayed launches of major platforms and notable vendors struggling to maintain pace.

IDC notes that "Looking ahead, new vendors, emerging form factors, and an expanded number of retail outlets will drive worldwide wearable device shipments from 102.4 million in 2016 to 237.5 million in 2021, a five-year compound annual growth rate of 18.3%."

For sure Apple's big push with Apple Watch for the holidays put the smartwatch category over the top to take a surprisingly slight lead over fitness bands as noted in IDC's chart below. 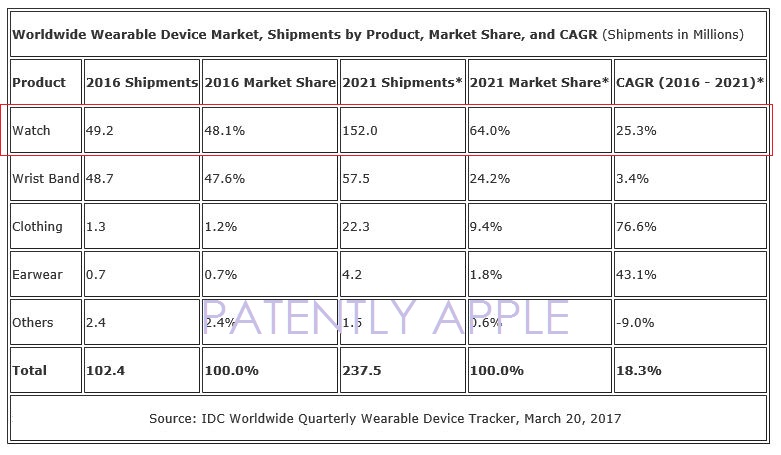 IDC's senior research analyst Jitesh Ubrani noted in the report that "With the shift towards watches and clothing, the need of a fashionable design will take center stage."

Ubrani added that "Tech companies will be forced to step up their game and offer a wider selection of sizes, materials, and designs in order to appeal to a broader audience. We also expect more tech vendors to partner with fashion brands for their creativity, and equally important, their distribution network. In doing so, wearables will be made available to a previously unaware auidence – one that frequents fashion outlets over tech outlets."

Back in June 2015 Patently Apple posted a report titled "The New York Times Fashion Director Dumps her Apple Watch." We noted in that report that Vanessa Friedman, the fashion director of The New York Times, had dumped her Apple Watch after 30 days of trying it. Friedman said at the time that no matter how attractive the Apple Watch was in the context of other smartwatches or smart bands, no matter how much of an aesthetic advance its rounded corners and rectangular display, it still looks like a gadget.

Twenty months later and Friedman is still pounding the drum that smartwatches are still wannabe traditional watches. They're still more like wrist gadgets.

While Apple Watch series 2 was the number one smartwatch for 2016, the volume is still anemic for this point in time in the market. Apple is thinking of adding smartbands (one and two) that will add more functionality and perhaps thin the watch down to be less gadgety. A 3D user interface could jazz things up too.

Apple and Jony Ive have always been obsessed with making devices thinner from the MacBook Air, to the iPad Air, to the new MacBook and iMacs. So at some point in time, their focus will turn to the thin Apple Watch. Yet will thinness alone make it less gadget like?

In addition, as flexible OLED displays become available in quantity over the next two or three years, Apple and other industry players will have the opportunity to introduce additional form factor options as IDC has suggested. One theme dreamed up by both Apple and Samsung relates to a future design with a wraparound display as noted below. 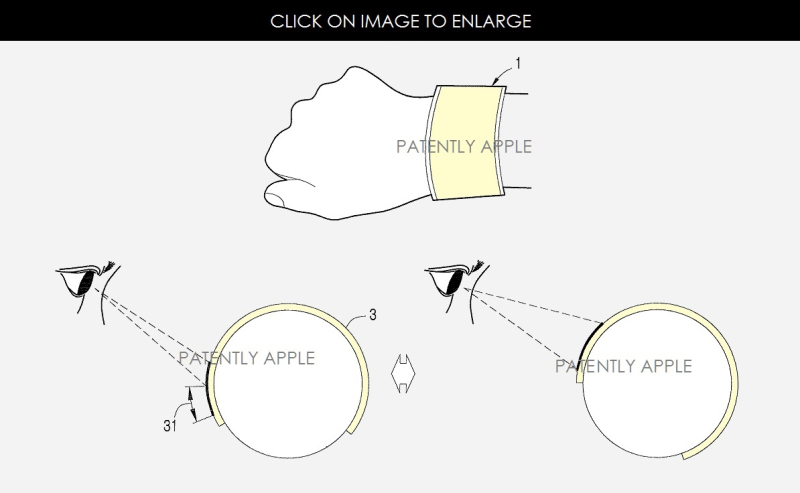 This kind of design could be made to look very professional with the right materials. It would also likely blur the line and double as a smartphone to make it really practical to carry a single mobile device.

That's one direction smartwatches could take, but that wouldn't necessarily address the fashion critics like Vanessa Friedman. Thouigh Samsung's last smartwatch moved towards the standard look of an analog watch. Samsung is now trying to blur the line by introducing a hybrid analog-digital watch design with their Gear 3 classic.

Whether this will be the year that the Apple Watch takes a design leap forward is unknown but smartwatches have a lot of work to do in order to win over the masses who aren't impressed to date.

In addition to the growth opportunity for these products, it is important to note the diversity of options within each category.

IDC's wearables research manager Ramon T. Llamas noted for the report that "Watches struggled as mass market devices due to limited and unclear value proposition to a broad base of potential users. Most potential customers saw watches performing multiple functions, but none of them worked exceptionally well to accomplish a myriad of tasks. Going forward, we instead expect watches to hyper-segment into specific niches, including connected kids' watches, athletic watches, luxury and fashion watches, and lifestyle watches that better address different segment needs, whether they be communication, health and fitness, or as smart luxury and fashion timepieces."

IDC also reports that "Earworn devices are also poised for growth as new startups bring their innovative technology to the table and traditional headphone companies incorporate additional capabilities beyond audio. Though growth is expected, volumes will remain somewhat modest as the primary features of health and fitness tracking "hearables" overlap with the more popular wrist worn devices.

The same approach can be applied to emerging products. Llamas added, "Clothing, for example, can be designed to track athletic performance or to track vital information and communicate with workers – like first responders heading into dangerous situations.

Similarly, companies are augmenting earwear with fitness tracking and smart coaching, while others are focusing on enhancing audio or providing real-time language translation. In both cases, the wearable is not taking a one-size fits all approach, and instead concentrates on specific solutions for specific use cases."