Home Archives Contact Us Subscribe Twitter MeWe Facebook Patently Mobile
Soverain IP Sues Apple and Microsoft for Infringing Patents Awarded to an MIT Professor
Apple Thinks that 'Globalization is Great' and with Wages at iPhone Plants being US$256/month, it's Understandable 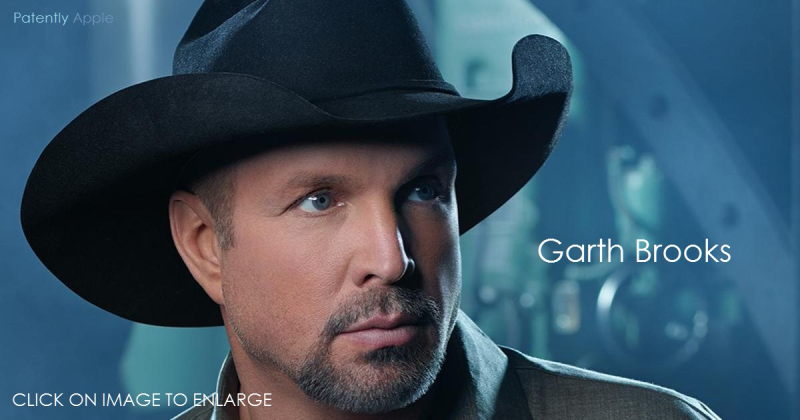 At the South by Southwest event yesterday, the reigning CMA 'Entertainer of the Year' talked about his decision to go with Amazon's streaming music back in October, applauded Spotify's Co-Founder and went out of his way to say that he could never change to fit the rules set out by "the other guys" – interpreted as being Apple Music.

USA Today covered one of the rules Brooks alluded to regarding Apple Music indirectly when asked the question whether or not consumers deserved the right to buy individual album tracks. Brooks turned the question around by asking the reporter what his wedding song was. The answer, Fools Rush In (Elvis Presley's version of the Johnny Mercer song). "That might be one of the greatest songs ever recorded," Brooks said. "Is it worth more than 99 cents? ... That song alone is worth 10 bucks." Royalties from album tracks keep songwriters in business, he says.

The Rolling Stone Report added that Brooks argued passionately on behalf of country music's frontline content providers. "For music's sake, which is all of our sakes, we must reinvest in the songwriter," he told a packed conference room in the Austin Convention Center. He claimed Nashville lost 84 percent of its songwriters in recent years, and noted how shrinking royalties and the dominance of a small number of country hit-writers makes for homogenous music.

Beyond Amazon, Brooks also began doing a weekly Facebook live "inside Studio G" event to connect with fans. For more on this story, read the full USA Today report here.