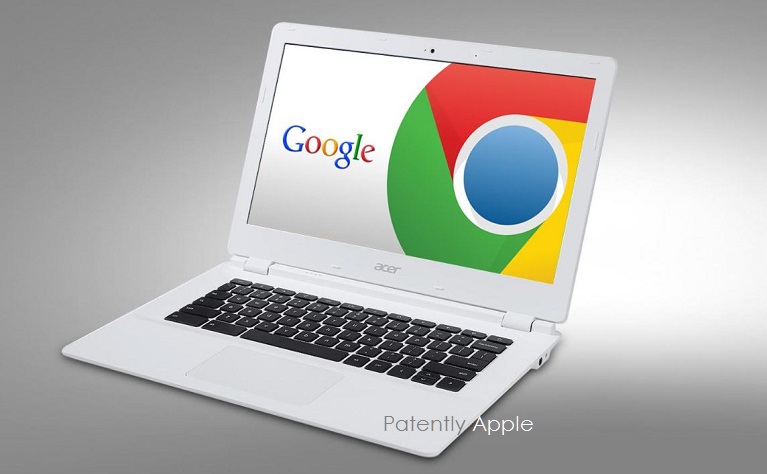 Back in 2014 AppleInsider's editorial writer and digital assassin Daniel Dilger took the Financial Times to task on the subject of Google Chromebooks overtaking Apple in Education. Since that time stories have kept piling in with the same conclusion that Google's Chromebook was the top computer used in the classroom. USA Today, 9to5Mac, CNBC, Fast Company and others kept that story front and center over the years along with the statistics to backup those claims. This week the New York Times weighed in with a report titled "Apple's Devices Lose Luster in American Classrooms," based on new education market statistics from Futuresource.

The NY Times report starts off dramatically by stating that "Apple is losing its grip on American classrooms, which technology companies have long used to hook students on their brands for life.

Over the last three years, Apple's iPads and Mac notebooks — which accounted for about half of the mobile devices shipped to schools in the United States in 2013 — have steadily lost ground to Chromebooks, inexpensive laptops that run on Google's Chrome operating system and are produced by Samsung, Acer and other computer makers.

Mobile devices that run on Apple's iOS and macOS operating systems have now reached a new low, falling to third place behind both Google-powered laptops and Microsoft Windows devices, according to a report released on Thursday by Futuresource Consulting, a research company. 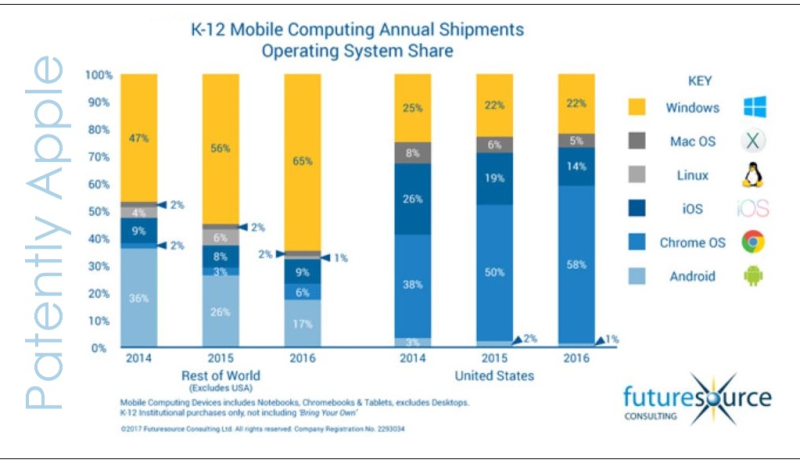 Futuresource noted in their report that of the 12.6 million mobile devices shipped to primary and secondary schools in the United States in 2016, Chromebooks accounted for 58 percent of the market, up from 50 percent in 2015.

School shipments of iPads and Mac laptops fell to 19 percent, from about 25 percent, over the same period. Microsoft Windows laptops and tablets remained relatively stable at about 22 percent, Futuresource said. Mike Fisher, an education technology analyst at Futuresource told the Times that "Apple is struggling." For more on the NY Times report, click here.

Futuresource's report that was published on Thursday noted that "Sales of Mobile PCs into the US K-12 sector continued to develop in 2016, with annual shipments growing 18% year-on-year in 2016, reaching 12.6 million units, up from 10.7 million in 2015. The outlook for 2017 is also positive with market shipment growth forecast to remain in double figures."

The number one platform in education was from Google. Their strengths were a "strong combination of affordable devices, productivity tools via G-Suite, easy integration with third party platforms/tools, task management/distribution via Google Classroom and easy device management remains extremely popular with US teachers and IT buyers alike. The rise of Chromebooks has also set new industry benchmarks with regards to average device pricing, with prices reaching as low as $120 on certain projects."

The Rise of Hybrid Tablet-Notebooks

The last point of interest is the report's position on hybrid devices for this year. "It is the area of '2-in-1' devices (devices that can be utilised both as tablets and with an integrated keyboard for productivity applications) that are expected to be the major competitive area in 2017.

Both Microsoft and Google (and their respective partners) have announced a wide range of 2-in-1 products designed specifically for education and are expected to sell for under $300.

The 2-in-1 form factor is ideal for education, providing schools with flexibility in usage. In addition, the technology behind stylus/pen usage has developed rapidly and 'inking' is expected to become widespread and add value to device usage.

Mike Fisher, Associate Director of Education at Futuresource Consulting, added that "PC provider's laser focus on the education sector is good news for schools and students. 2017 will see wide ranges of computing devices, designed specifically for education and at competitive price points, entering the market and vying to be the device of choice for learning."

Though for most school districts it's about tight budgets and this is where the Chromebook usually gets the nod.

Last year Patently Apple posted a report titled "Apple and IBM have launched their First MobileFirst App for Education Called 'Watson Element'," showing that many schools are looking for deeper educational tools and more advanced devices like the iPad.

Considering that the top Fortune 500 companies and now leading medical facilities around the U.S. like Stanford Medicine are using the iPad, many schools will want to ensure that their students are familiar with tools that industry leaders prefer.

Not every school wants to work with bottom of the line tools and so Apple will continue to introduce new iPad models later this year with more software to assist educators prepare their students for the real world.