On Thursday the US Patent & Trademark Office published a patent application from Apple that revealed the use of liquid metal on an iPhone. Liquid metal has always been filed in mysterious patent filings with only vague references to devices that might use the material but never a direct link to a specific product until now. In fact, in one very specific patent point reveals that the backside of an iPhone may be made of a metallic glass substrate with an added metallic glass coating for extra strength. Could this be what Apple will use for the iPhone 8 in order to make the glass crack proof? Only time will tell.

Apple notes in their patent background that Metallic glasses (also referred to herein as amorphous alloys and glassy alloys) are metallic alloys that do not have a crystalline structure. Instead, their structure is amorphous. Metallic glasses have a number of beneficial material properties that make them viable for use in various engineering applications.

In another aspect, the disclosure is directed to a method of modifying the chemical composition of a metal substrate.

The single paragraph noted above within the patent is the key should Apple use this method to create the glass back panel of the iPhone 8. 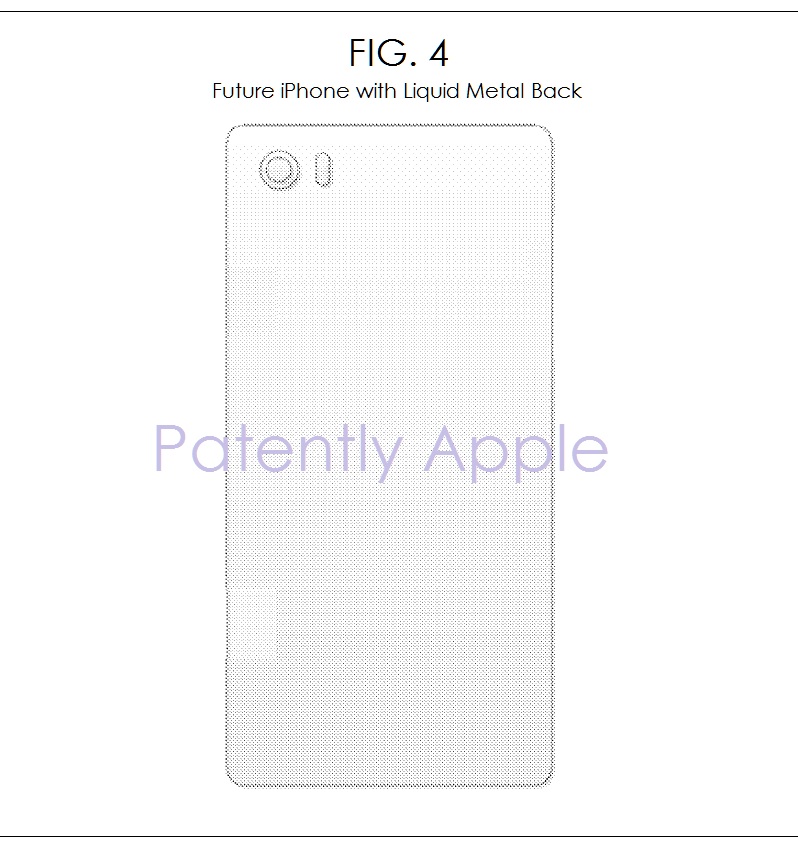 According to Apple's patent FIG. 4 noted above, the image depicts a portable electronic device having a micro-alloyed metallic glass coated metal substrate on a housing component.

Apple's patent application was filed back in Q3 2016. Considering that this is a patent application, the timing of such a product to market is unknown at this time. The filing date of the patent filing would strongly suggest that the use of liquid metal is for a future iPhone and not designed for the iPhone 7.

Last week Patently Apple posted a report titled "Apple's iPhone 8 with Glass Backside may use Physical Direct Connection Technology to Enhance Wireless Charging." The report noted that "Since metal chassis will create interference with the wireless charging's induction coil, glass or ceramic type of chassis has become popular among smartphone vendors that are looking to release wireless charging smartphones." Using a super strong glass methodology such as metallic glass or liquid metal makes a lot of sense. We'll see in September if in fact this process was chosen by Apple.