Home Archives Contact Us Subscribe Twitter MeWe Facebook Patently Mobile
The Government of India has Reportedly Rejected Apple's Key Demands for Starting Full-Pledged Manufacturing
Did the BBC Create a False Narrative that Apple had to Change their Aids Message for the iPhone 7 'Red' in China?

In late December Patently Apple posted a report titled "Family Sues Apple for not using a patented iOS Feature Designed to shut Off Certain Apps while Driving." The patent involved in the lawsuit was filed by Apple in December 2008 and granted in April 2014. Today the US Patent & Trademark Office published a patent application from Apple that shows us their latest invention related to shutting off messaging apps from both an Apple Watch and an iPhone while driving. This is a safety feature that all smart device makers should be forced to adopt as all drivers are at risk when a driver is distracted. The problem noted in the patent filing is that Apple only commits to reducing the amount of messages coming to an iDevice while driving and not all messages. It sounds like they're purposely building in a legal safety valve which is a little disappointing. That aside, let's hope this feature goes from theory to action in the not-too-distant future. In the end, it's a safety issue that all hardware and software companies should be forced to deliver.

A wearable device can be worn by controllers or passengers in vehicles. A passenger may wish to enjoy full use of the wearable device, such as by interacting with applications, receiving notifications, or issuing commands by voice or touch. In contrast, a user controlling a vehicle may not want, or may not be able, to safely interact with the wearable device in the same ways that a passenger could. For example, a vehicle controller may not be able to take his or her eyes off the road or hands off the steering wheel to interact with the device.

Apple's invention in-part includes a wearable device (such as an Apple Watch) and techniques for accurately detecting whether a user is controlling a vehicle based on motion data or other information from wearable devices or other iDevices.

Embodiments of the present disclosure may adapt the behavior of Apple Watch according to whether the user is controlling a vehicle (e.g., driving a motor vehicle, steering a bicycle, flying an airplane, navigating a boat or ship, etc.).

For example, the wearable device may reduce the type or quantity of notifications that the user receives while the user is controlling a vehicle. 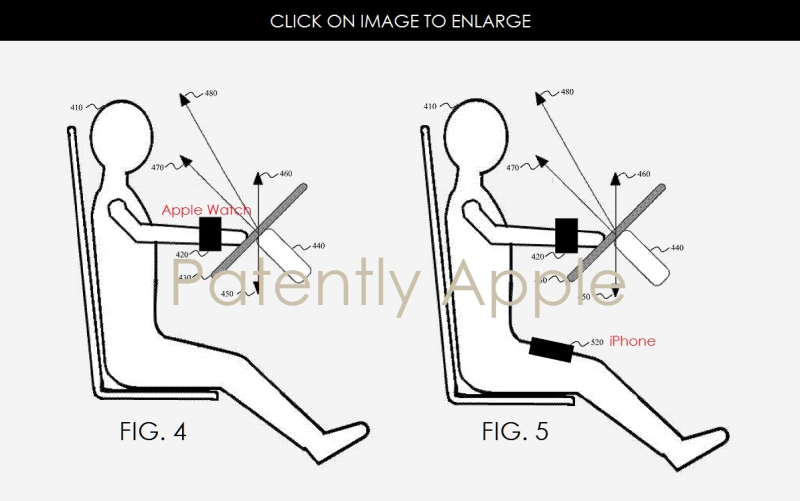 Vector #460 is an "axial vector" or "pseudovector" representing the angular velocity of the vehicle when the vehicle is turning. In the example of FIG. 4, in which the vehicle is on approximately level terrain, the axis of rotation of the vehicle may be correlated with the direction of gravity vector #450.

And lastly vector #480 is an axial vector representing the angular velocity of the wearable device 420.

Apple further notes that in some embodiments, the motion sensors may include, for example, an accelerometer, a gyroscope, a barometer or altimeter, a magnetometer or compass, etc. The wearable device may also include a motion coprocessor, which may be optimized for low-power, continuous motion sensing and processing. 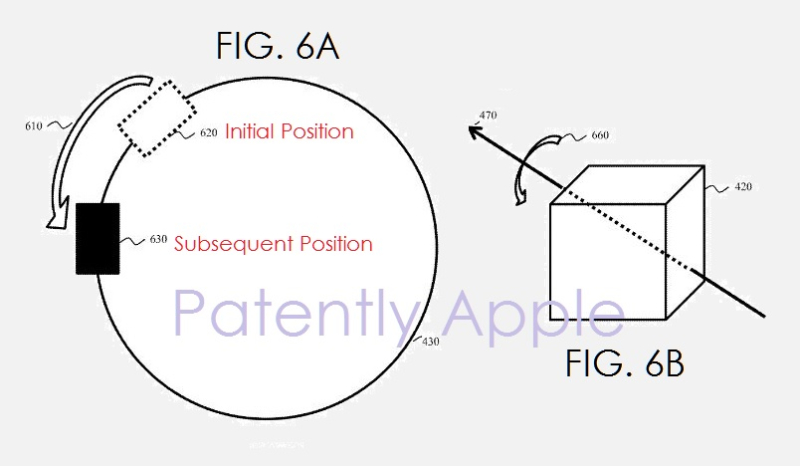 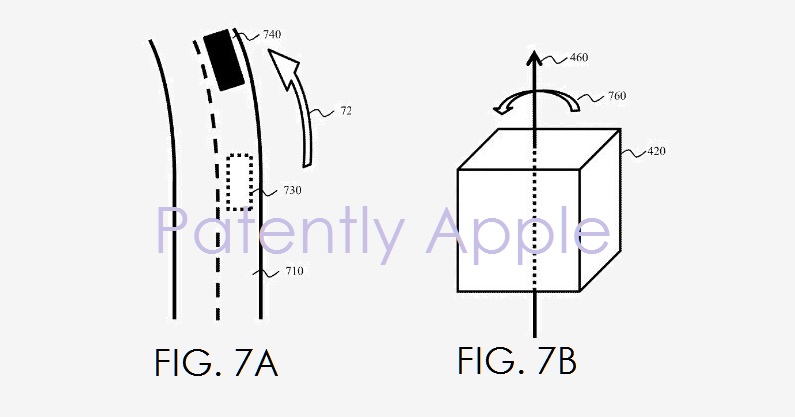