Apple began work on biometric sensors for both earbuds and for a wrist device back in 2007 as the iPhone was first being introduced. Apple's patent filing publicly surfaced in April 2009 and was granted in February 2014 – the very year that Intel introduced a similar idea of smart earbuds using their Jarvis digital assistant to control it while a user was active. Some of the graphics from Apple's granted patent are noted below. Today the US Patent & Trademark Office published a series of three patent applications all titled "Earbuds with Biometric Sensing." In Apple's patent filing they note that at least one of the biometric sensors within the earbud is configured to be pressed up against a portion of the ear known as the tragus that will allow the collection of biometric measurements. Beyond biometrics, the earbuds/AirPods could deliver noise cancellation features. 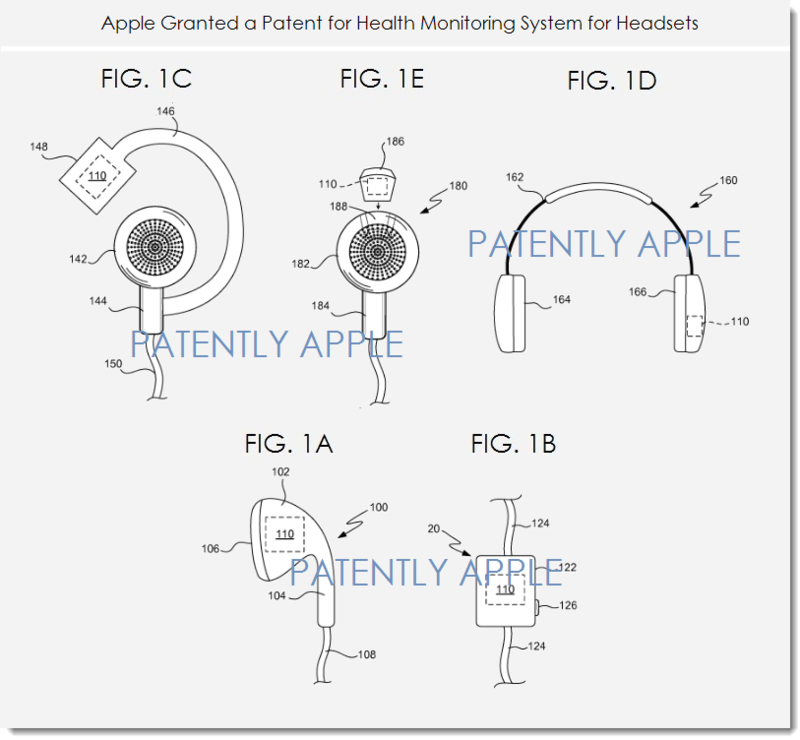 Apple's patent filing details how a photoplethysmogram (PPG) sensor could be added to the earbud so that it sits in a particular part of the ear called the tragus so that the device can monitor biometric data collected by the PPG sensor. The sensor measures biometric parameters by shining light and then measuring the reflectivity of that light off the skin. Variations in the reflectivity can be used to characterize profusion of the blood through the skin of a user.

Apple uses this technique in Apple Watch as well. Unfortunately, the exterior surface of a conventional earbud doesn't typically make sufficiently solid and/or consistent contact with a well-profused portion of the ear to provide reliable biometric parameter measurements.

The compliant member can then engage an opposite surface of the ear known as the concha so that the earbud is wedged between two opposing surfaces of the ear. By choosing a compliant member formed of compressible or otherwise deformable material, the earbud can be well-suited to fit within the ears of a broad spectrum of users.

Apple's patent FIG. 2 noted below shows a cross-sectional view of an earbud device that includes a number of electrical components used to support the described device functionality; FIGS. 3A-3B show views of an earbud situated in the ear of a user and how a biometric sensor of the earbud contacts the tragus of the user. 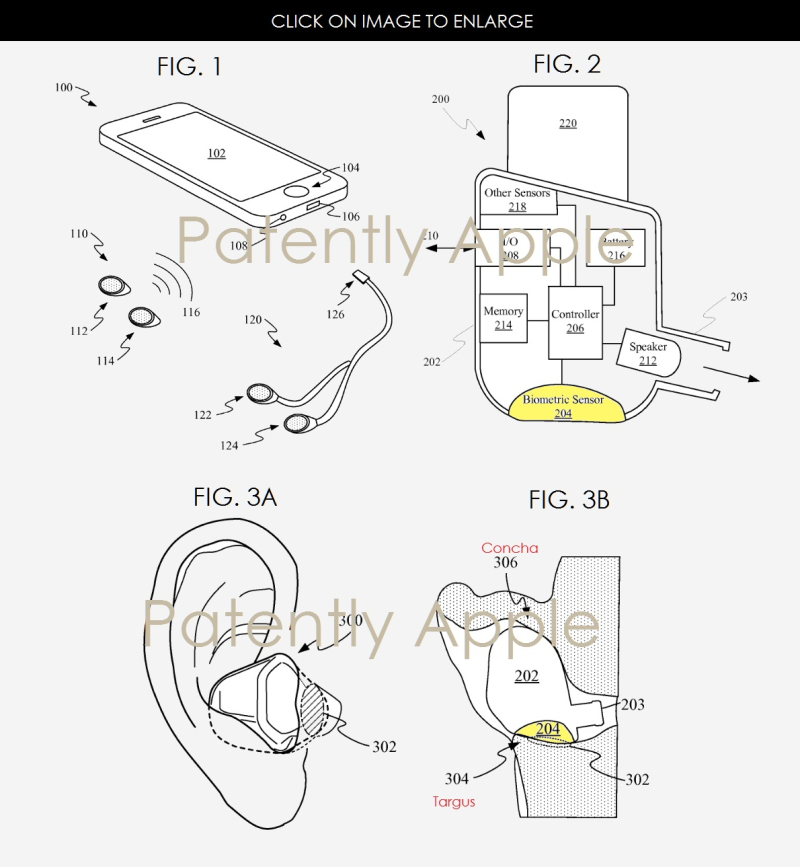 Apple's patent FIG. 5B noted below shows how protrusion #504 can also include one or more electrical contacts #508. The figure also shows how the biasing member can be interchangeably removed from an earbud by way of a locking channel #506. 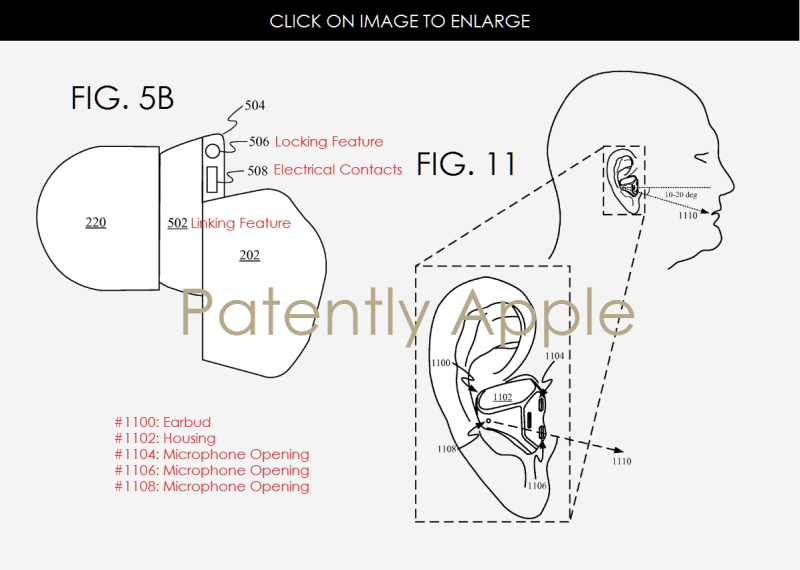 Apple's patent FIG. 11 noted above shows an earbud having a housing that defines multiple openings for receiving audio content at multiple microphones.

Beyond biometric measuring, the earbuds could provide noise cancellation by using one or more of the microphones. Apple notes that in some embodiments, the noise cancelling provided by earbud #1100 can be setup to provide selective noise cancelling which allows any audio received within the 10-20 degree window to be allowed through, while in other embodiments, substantially all audio can be screened out. In this way, during a conversation a person's own voice wouldn't prevent the speaker from being able to hear other speakers attempting to enter or participate in a conversation.

Biometric sensors associated with this device could include a range of sensors including a heart rate sensor, a VO2 sensor, a GSR (galvanic skin response) sensor, an electrocardiogram (EKG) sensor, an impedance cardiography (ICG) sensor and a temperature sensor.

Apple's earlier work on this project covered a system that would also be able to work within a cyclist's helmet and also work with a head gesturing system to control your iPhone or iTunes while working out.

Interesting is the timing of today's biometric patents when a secondary patent filing published today covers new sensors for Apple Watch designed for cyclist activities. It's clear that Apple is approaching biometrics and advanced sensors for use across a wide range of products.