A new report scoring Tech Company's support for digital rights came to some rather surprising conclusions, with the one of most interest ranking Google above Apple. In fact, Apple ranked seventh in the top twelve in the 'Internet and Mobile' sector of the report. The report grades transparency, not just conduct and overall wasn't complementary of any of the twenty-two firms when it came to defending your freedom of speech and privacy.

On Thursday the Ranking Digital Rights launched its 2017 Corporate Accountability Index which ranks 22 of the world's most powerful telecommunications, internet and mobile companies that disclosed commitments and policies affecting user's freedom of expression and privacy.

The company noted that "People around the world increasingly rely on the internet and digitally networked devices in all aspects of their lives. But do we have a global information ecosystem in which future generations' rights can be respected? Unfortunately, the answer is 'no.'

Findings showed that companies did not disclose enough information about policies affecting users' rights—and as a result most of the world's internet users lack the information they need to make informed choices. 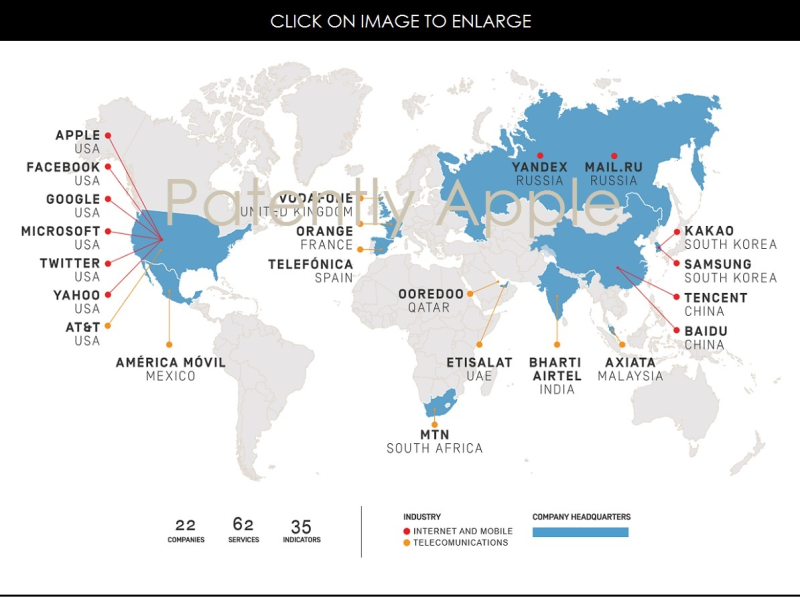 Project director Rebecca MacKinnon stated that "There is tremendous room for improvement by all companies.' despite positive steps by some companies since organization released its inaugural Index in 2015. Only two companies—Google and Microsoft—scored more than 60 percent on this year's Index, with the remaining evaluated receiving failing grades.

Findings showed that Apple's iOS, Google's Android, and Samsung's implementation of Android all offered poor disclosure of policies affecting users' freedom of expression and privacy. This is a particular concern given that most of the world's new internet users are coming online with smartphones.

The report further noted that "It is possible that both Apple and Samsung may have internal policies and practices aimed at protecting users' freedom of expression and privacy that they do not formally disclose to the public. However the Index only gives credit for policies that are publicly accessible and presented in a company's policy documents. We take this approach as a way to encourage companies to formalize their commitments into policy so that users can make informed decisions about the products and services they use.

Leading executives at Apple for instance have made numerous statements in the media about the company's commitments to privacy and security—and the consensus in the technical community is that Apple's products are the most secure on the market. However its commitments in this regard were not always clearly specified in the policy documents evaluated for this Index.

In respect to online stores, the report noted that "The Apple App Store, Google Play Store, and Samsung Galaxy Apps store are chokepoints for freedom of expression. All three mobile ecosystems failed to sufficiently disclose policies affecting users' freedom of expression. While Google's Android disclosed more than its peers, no company provided enough information to enable app users and app developers to fully understand what kinds of content can be created and shared, what types of activities are prohibited, or the consequences for violating these rules."

For the record, 'Ranking Digital Rights' (RDR) is a non-profit research initiative working with an international network of partners to promote greater respect for freedom of expression and privacy rights among information communications technology companies. The study is in line with the U.N. Guiding Principles on Business and Human Rights.

While our report focused on the main parts relating to Apple, the full report actually expands to cover 10 additional companies in the telecom sector that may interest some. For sure the study will be lacking in that space due to the ruling by the U.S. Senate this week that rolls back an FCC rule that required internet-service providers to obtain customers permission before selling their information to third parties.

Now for the Punch Line

Update: If you're scratching your head as to how Google is being praised as the leader in Digital Rights and privacy, there could be a clear reason for that.  A 2015 report by the U.K. tech site called 'The Register' claims that Eric Schmidt is behind the foundation writing the report.

According to The Register: " Just fancy that! A Washington think tank chaired by Eric Schmidt, Alphabet Inc’s executive chairman, has given Alphabet Inc. an award for "protecting your digital rights”.

Schmidt became executive chairman of the New America Foundation, which had built a strong reputation as a non-partisan and imaginative policy think tank, in 2008.

The following year, the foundation created an “Open Technology Initiative” and the think tank began to march in lockstep with Google’s own policy agenda.

This is called 'policy laundering' – the act of legitimizing a policy, or attempting to seize control of a debate, via third parties. Another useful description is 'carousel propaganda,' coined by blogger Frank Fisher, an analogue of 'carousel fraud.'

This week the foundation trumpeted the first results of its “Ranking Digital Rights” project. Coming up smelling of roses were Google, “the highest ranking internet company”, and Vodafone. The team made a gloomy conclusion: "Nearly half the companies in the Index scored less than 25 per cent, showing a serious deficit of respect for users’ freedom of expression and privacy."

Two years later and Eric Schmidt's "project" continues to provide Google with a resounding win over Apple on Privacy. When Apple's CEO published Apple's position on Privacy, hinting that Google sells your private information, Eric Schmidt basically called Cook a liar. Hiding behind an organization that just happens to give Google a glowing privacy ranking is as sleazy as it gets. I have no understanding how this is even legal.

When Apple's Steve Jobs invited Schmidt to sit on Apple's board, he sat through countless meetings about the iPhone before the iPhone was launched. Never once did he tell Jobs that he had to recuse himself because his company was developing a competing product (Android). Why Apple didn't sue Schmidt on this back then remains a mystery to this day. But Schmidt was sleazy then and the new study noted above shows that he'll go to any length to paint Google the opposite to what it really is. Schmidt fits  the classic definition of a wolf in sheep's clothing. Of course this is my opinion and you could make a judgement on this as you please.

As a second source for this story connecting 'Ranking Digital Rights' to the 'New America Foundation' behind this study is a 2016 report by the U.K.'s Guardian here. Wikipedia also links Schmidt to this foundation as well.

In the end, I'm sure that the findings of Ranking Digital Rights report will raise the ire in Apple fans. I'd love to hear what your take is on this report, so send in your comments below.