Apple began filing patents regarding displays and trackpads that could one day provide tactile feedback since at least 2010. In 2015 Patently Apple posted an IP report titled "Apple Invents an Advanced Diamond Layered Trackpad that Delivers Next-Gen Tactile Sensations Including Texture." Today the US Patent & Trademark Office published a patent application from Apple that once again advances the possibility that Apple is getting closer to delivering next-gen tactile experiences for displays, trackpads, device covers, fabric device housings and more. It could assist in delivering the feel of fabrics or textures. It could be used to create an interface for braille and extend through to CarPlay displays and beyond. Apple's patent application feels more like a master patent trying to cover the widest range of applications without ever getting too specific to let us know what we may experience first. The patent even extends to touching on a feature that Apple may use with future folding smartphones.

Electronic devices often include displays for presenting images to a user. Touch screen displays have touch sensors to gather touch input from a user. Touch input and force input can also be gathered using track pads.

When gathering user input such as touch input, a user's finger or other external object may slide across the surface of a touch screen display or track pad with little or no resistance. This lack of tactile feedback can reduce the ability of the user to accurately supply input to an electronic device.

Apple's invention covers Input-output devices such as a track pad in a MacBook. The input-output devices may include components such as touch sensors and force sensors for gathering input from a user. Display structures may include a display such as an organic light-emitting diode display, a liquid crystal display, or other display that can present visual information to the user. The display may be a flexible display.

The tactile output devices may provide protrusions, indentations, selectively stiffened and softened areas, and other tactile output for a user. A user of a display may, for example, be provided with deformed portions that surround an on-screen option or a highlighted item. 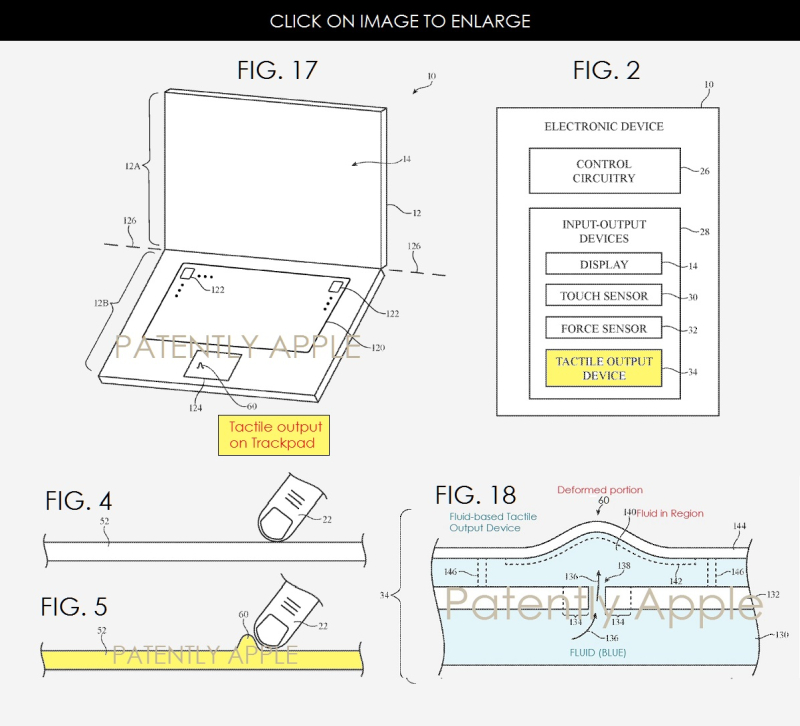 Fluid Based Methodology: Apple's patent FIG. 18 noted above is a cross-sectional side view of an illustrative fluid-based tactile output device.

If desired, a display may be formed from a mesh-shaped polymer substrate having an array of openings. Micro-light-emitting diodes or other light-producing structures may be mounted on the mesh-shaped polymer substrate. Actuators for a tactile output device may be located in the openings. The mesh-shaped substrate, micro-light-emitting diodes, and tactile output device components may be embedded in a flexible polymer layer.

Electroactive polymer actuators or other actuators may be used to automatically open and close a foldable electronic device with a flexible display.

Control circuitry may place the device in an open position or a closed position by applying electric fields to the electroactive polymer or by otherwise controlling actuators in the electronic device.

In November 2016 Patently Apple posted a report titled "Apple Wins Surprising Patent for a Future Bendable or Foldable iPhone using Advanced Carbon Nanotube Structures." Today's patent application revelation provides us with a tiny clue that Apple is working a very unique feature, that for now we can only partly understand.

Tactile Applications to Extend to a Wide Range of Future Devices

Although Apple illustrates a future MacBook and a generic tablet-like device as examples of devices using this next generation of tactile applications, Apple makes it clear that it could apply to a wide range of future devices such as an iPhone, iPod, iPad, computer monitor, Apple Watch and other wearables, while it may also be embedded into displays in a vehicle or kiosk.

Beyond the normal range of devices listed in patents, Apple goes far beyond into new applications described as follows:

Tactile output can be provided by a device that also gathers touch input (e.g., to provide tactile feedback associated with a user's on-screen touch manipulation of an object, menu option, etc.) and/or may be provided on a surface of a device that does not include a touch sensor for gathering touch input (e.g., the inner surface of a watch band, etc.). The surface that provides the user with tactile output may be curved or planar."

Beyond tactile for touch with a user's fingers, Apple also notes that it could be used with Apple Pencil. Apple notes in patent point #40: "Tactile output may be sensed using a stylus, brush, or other inanimate object that contacts the display.

Apple's patent FIG. 16 is a perspective view of an illustrative micro-light-emitting diode array for a display having a mesh shaped substrate and an actuator formed in an opening in the substrate for providing tactile output. 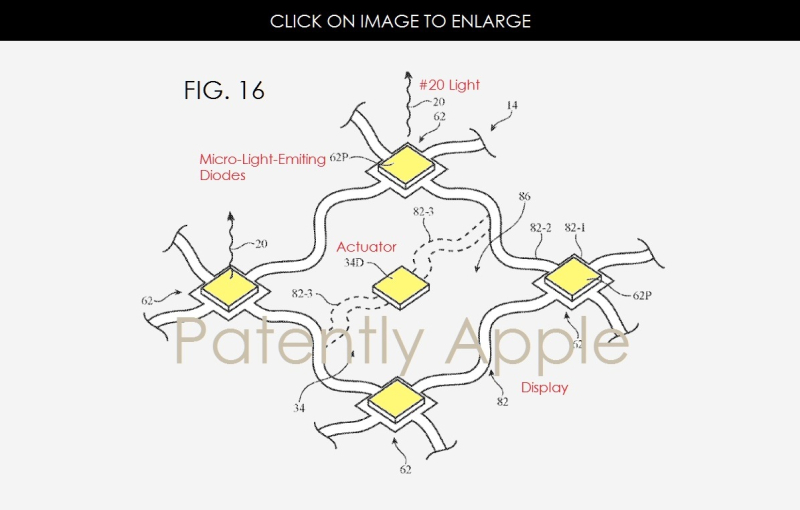