Home Archives Contact Us Subscribe Twitter MeWe Facebook Patently Mobile
Samsung Shift's away from Iris Scanning Security alone to full Facial Recognition to get ahead of Apple's next iPhone
The Japanese Government Likely to Ensure Toshiba is acquired by a U.S. Firm and Lock out Chinese Bidders like TSMC

Our Patently Mobile IP blog has been covering Samsung's obsession with flexible, bendable, scrollable and foldable smartphone designs and features for years and have created an archive for easy review. Behind the scenes Lenovo, Apple and Microsoft have all been working on next generation foldable smartphones and tablets. Patently Apple reported in December that a Kolon Industries, a leading supplier of foldable display technology, confirmed that five smartphone companies are currently testing foldable smartphones. Today a new report out of Korea reveals that another leading technology for foldable displays could be ready for 2018, confirming the announcement first made by Kolon Industries back in December.

Today's Korean report notes that "smartphones that can be bent and laid out can be released as early as 2018 as 'flexible hard-coating' technology, which was seen as the challenge in commercializing flexible Smartphones, has been developed.

This technology makes plastic film cover that is easily bent and resistant like glass. As major technologies such as transparent film followed by flexible hard-coating technology are developed, it is likely that foldable Smartphones will soon be commercialized.

Professor Bae Byeong-soo of KAIST's New Material Engineering Department made an announcement yesterday that he had developed flexible hard-coating material that can make foldable Smartphone cover film that is also resistant to scratches.

The research team led by Professor Bae explained that it has completed hard-coating material through siloxane hybrid material that has silica glass, silicon rubber, and plastic molecule structure mixed elaborately."

Professor Bae explained that "We confirmed that siloxane hybrid material has high solidity like glass, flexibility like plastic, and elasticity like rubber through nano-coining test and nano-bending test. Based on in-folding display that folds screen inward, this material has hardness of 9H and can be fold more than 200,000 times with a radius of under 1mm," which would be a real breakthrough if true.

Bae added that this material can also be used for out-folding displays like we've seen with the Lenovo prototype noted below. 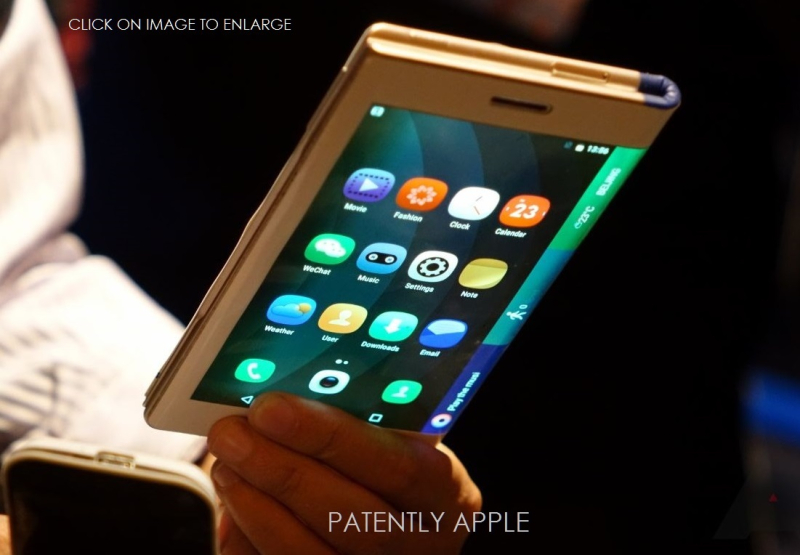 Professor Bae established Solip Technology, which is a spun-off from KAIST University, in 2012 and is commercializing flexible hard-coating material. He is also pushing for mass-production of this material by having production facility within KAIST Munji Campus.

The results of the research regarding flexible hard-coating material will be published on 'Advanced Materials,' which is a scientific journal regarding materials.

Like most predicted new technologies, don't be surprised if the roll out is a little slower than claimed. On the flip side, the smartphone industry needs a real boost in the arm to take it to a new level and leaders like Samsung and Apple may want to get a jump on their competitors to win new market share.

It's always fun to be on the cusp of a new shift in technology and next-gen foldable mobile devices along with 5G networks coming to market in the 2018-2019 time line is going to be an exciting time to look forward to as it was with the first iPhone rollout in 2007.