While Apple's iPad remained the Leader in Tablets for 2016, Innovation is needed to reinvigorate the Sector

While Apple toppled iPad expectations for 2016, the fact remains that for the year iPad sales dropped 14.1%, more than double the industry as a whole which fell 6.6%, according to the latest TrendForce report covering the tablet market. Apple's total shipment for 2016 came in at 42.55 million units. Strong demand for iPad in North America and exceptional results from year-end holiday sales sustained iPad shipments last year. 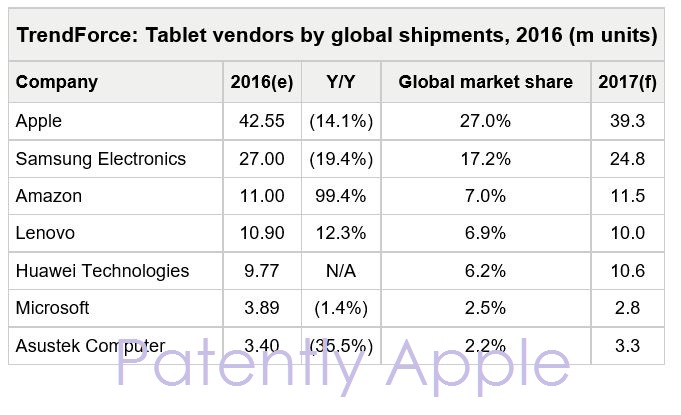 TrendForce report Anita Wang pointed out that "Apple has as many as three to four new iPad products lined up for 2017. In addition to an economically priced 9.7-inch model that is ready for market release, Apple will also launch a new 12.9-inch model. Furthermore, Apple will also introduce a new 10.5-inch iPad. This will be a new size category for the device series."

TrendForce estimates that this year's iPad shipments will fall by 6~8% annually to around 40 million units. There are reports of a "Pro" version of iPad mini being planned. If Apple decides to release such a product this year, the annual iPad shipments may stabilize and even register growth."

Adding more "Pro" iPad models is simply means that more iPads will be able to use Apple Pencil as it's been rumored that they Apple smartpen will be able to work with more apps and possibly Safari and an Apple patent surfacing in December showed Apple Pencil working with Messages and iMovie.

Samsung's tablet shipments for 2016 were hit harder than Apple's by falling 19.4% annually to 27 million units.To maintain their second place position in the market, Samsung will continue to introduce tablets with OLED displays providing a superior display than from competitors Lenovo and Huawei.

Apple's thirst for obtaining a greater supply of OLEDs may indicate that their road map will make the shift to OLED in the coming years as LG, Foxconn and BOE are able to provide them with needed volume to accommodate the shift

Microsoft's Surface lineup continues to be unable to crack the top five tablet vendors list again. Their high priced units are aimed at business users and without an entry unit to compete with those on the top five list, they will remain shut out

On the flip side, Amazon's cheapo tablet market approach allowed them to double sales (99.4% to be exact) from last year and zoom to the number three spot worldwide with 11 million units. Anyone can sell cheapo tablets at a loss like Amazon, so on that count at least Microsoft is a pure competitor trying to innovate and make a profit. Microsoft also doesn't want to enter the lower end of the model and compete with their Windows partners.

Force Trend is forecasting a decline for Microsoft's Surface in 2017 going from 3.9 million units to 2.8 million units. What ForceTrend's analyst appears to be missing in her report however is the introduction of Windows + Qualcomm system launching later in 2017 with easy access to cellular data plans on-the-fly. This has the potential to demonstrably increase Windows based tablets and detachables in the 2017 and 2018 timeline.

In my view, this is the trend in tablets to watch for as Microsoft's strategy is clearly to win back the enterprise market and reverse the current success of the iPad and iPod Pro. While that may be a lofty goal, this will remain the market war to keep an eye on beginning later this year.

In the end, Apple remained the King of Tablets for 2016 hands down. Yet it's clear that innovation has to be stepped up to reinvigorate this market sector. Apple and Microsoft have a few new approaches for the year and hopefully both will be able to hit a new vein of excitement for this sector that is in free fall.