While Apple's CEO see's 'Some Exciting Things' coming to the iPad, others see nothing but Doom and Gloom 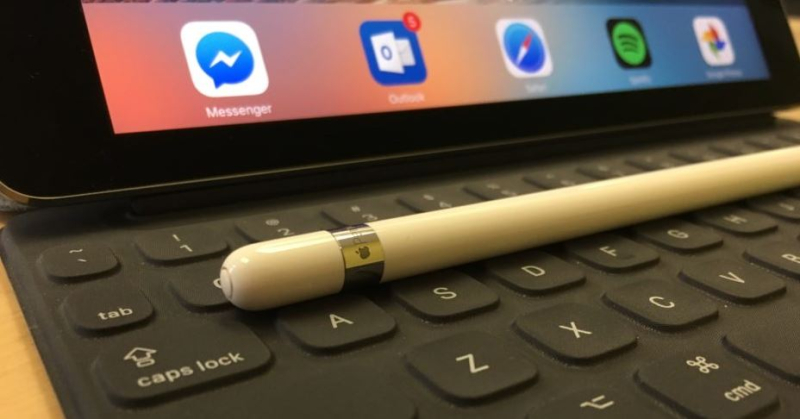 In a single blow, Apple's Q1 2017 financial results crushed the collective negative financial analyst community to point of embarrassment. Apple delivered a nice pie for each of their faces and joyfully rubbed it in as they broke yet another revenue record yesterday with iPhone 7 sales shocking all estimates, even Apple's own internal estimates. Of course there were a few missteps in the quarter, one of them being Apple's iPad which VentureBeat was all too pleased to pounce on in a new report this morning titled "iPad in free fall after sales plunged 22% in Q1." 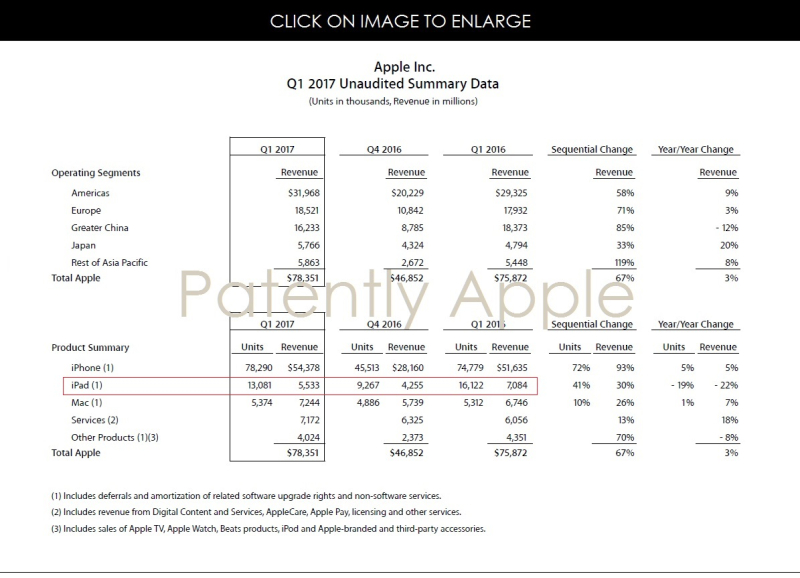 VentureBeat (VB) reported that "The company said it sold 13.1 million iPads, down 22 percent from the 16.1 million it sold during the holiday season last year. iPad revenue was $5.5 billion, down 19 percent from $7.1 billion a year ago." You could check out Apple's iPad unit sales in the chart above. I highlighed Q1 2017 vs. Q1 2016 two columns over to make it easy to see.

VB further noted that "Last year, the iPad was comfortably Apple's No. 2 product after the iPhone. Now, it's fourth, behind the iPhone, Macs, and Services — even the 'Others' category (Beats, Apple Watch, Apple TV) has almost closed the gap.

The gathering gloom over the iPad deepens further when you consider that three years ago during the holiday period, Apple sold 26 million of them." You could read the VentureBeat report here for more.

In addition, Apple's CFO quoted NPD market research yesterday during Apple's conference call. At the 17: 40 mark of the conference call Luca Maestri stated that NDP's statistics pointed to Apple's iPad having 85% of U.S. market share in tablets priced above $200. So does that sound like a gloomy statistic to you? No, of course not.

Apple's CEO talked about the iPad starting at the 51 minute mark of their conference call and made it clear that they underestimated the demand for the iPad in the holiday quarter and more importantly, had a shortage issue with one of their suppliers that held back sales for the quarter.

Cook added that "if I kind of zoom out of the 90 day clock [meaning looking beyond a single quarter by quarter focus] … we have some exciting things coming on iPad. I still feel very optimistic where we could take the product." Whatever the "shortage" issue was and still is, Cook said it's going to effect Q2 as well. But again he reiterated that beyond the 90 day clock he is very bullish on iPad.

On the tablet front we learn this morning that Samsung is preparing to unveil new tablets during a press conference on Feb. 26, the day before the Mobile World Congress trade show begins. 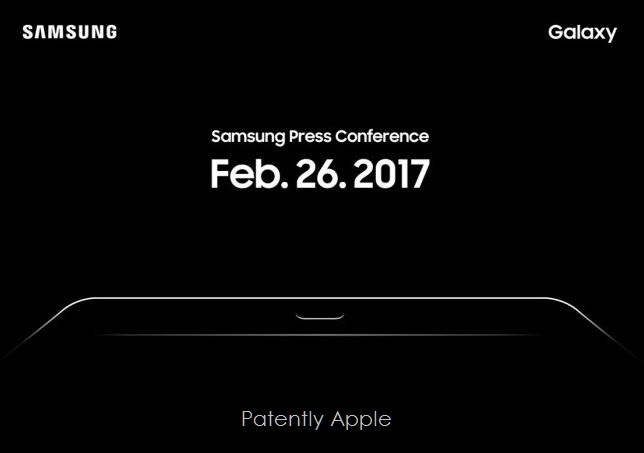 In the big picture no one really has a clue what they'll be introducing beyond the basics. Yet they could use this event to introduce their new Viv-driven digital assistant called Bixby. Will they save that for their new Galaxy S8 or launch it on their tablet? Another new feature could be adding the curved display edges like they offer on their Edge smartphones.

Apple has a few patent pending ideas for future iPads with a few interesting ones at that, but you just can't count on patents until they actually launch. All we know is that Cook believes that there are "some" exciting things for iPad on the horizon.

The biggest threat to Apple's iPad kingdom in 2017, in my view, could come from the new Windows 10 + Qualcomm platform that is exciting new players to jump on board this train. Players such as Huawei, Lenovo and Xiaomi, beyond their traditional PC OEM's like HP, Dell, Asus and others, are on board to deliver new mobile products this year that will be thrown into the tablet sector.

These OEMs will be launching Surface and SurfaceBook-like products which will shift many notebooks into the Hybrid Tablet category and drag Apple's market share down measurably over the next few years if these hybrids prove to be successful. This could be a challenge that Apple may decide to counter. A newly granted patent surfaced this week illustrated that Apple is still working on a cellular MacBook. So who knows, maybe it's an iOS based notebook that's a variant of the iPad Pro models. A hard cover iPad versus a softcover with keyboard.

If anything, the challenge from Microsoft's war on the iPad is likely to cause some sparks to fly this year and that's always fun to see play out. Good competition usually gives birth to new ideas that could shake up a sector. The tablet sector could use a little shock therapy in order to get it to the next level. So stay tuned as this could be an interesting year for iPad.