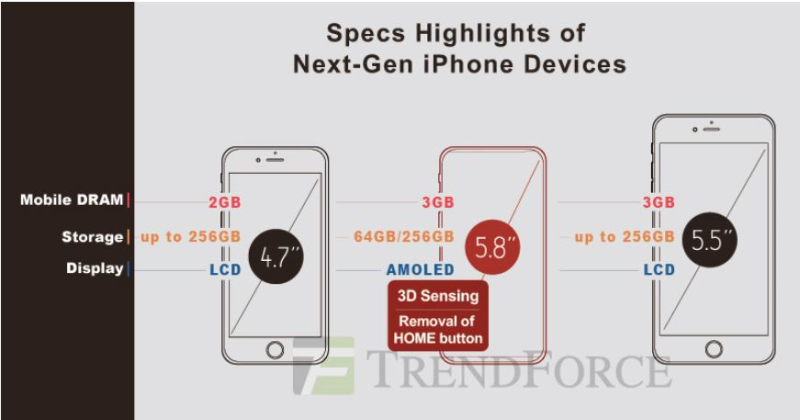 The next major iPhone release will certainly be one of the most anticipated events in the global consumer electronics market in the second half of 2017. TrendForce's recent findings on the 10th anniversary iPhone release reveal that Apple's latest refresh of the device series will include three new models, with one of them having significant hardware and design upgrades such as an AMOLED display.

TrendForce estimates that the production volume of the next iPhone devices for this year will reach at least 100 million units, of which the model with the AMOLED display will make up the greatest share. The production volume of all iPhone devices for 2017 is projected to total around 230 million units, representing an annual increase of almost 6%.

Based on the information from the supply chain, one of the three new iPhone devices that will be released in this year's second half will be a top-of-line model with standout features. This high-end iPhone will be the first in the device series to have an AMOLED display that is 5.8 inches in size and 2K in resolution. However, Apple will not implement the curved display design for the high-end iPhone because there are issues with the 3D glass in terms of production yield and drop test results. Thus, the next high-end iPhone is expected to have the same 2.5D glass for display cover as the current models.

TrendForce's report goes on to point to 3D sensing technology, facial recognition. In the end, the significant innovations in the latest iPhone refresh are designed to attract the large group consumers who have bought iPhones but yet to replace them since iPhone 6. Therefore, the 10th anniversary release is expected to trigger a huge wave of replacement demand. For more see the full TrendForce report here.