Home Archives Contact Us Subscribe Twitter MeWe Facebook Patently Mobile
You Know the VR Market is Lost when Facebook's CEO gets Excited over wearing VR Gloves to type on a Virtual Keyboard
Fake News is unlikely Hurting Apple, so why is the CEO of Apple making it an Issue Today? 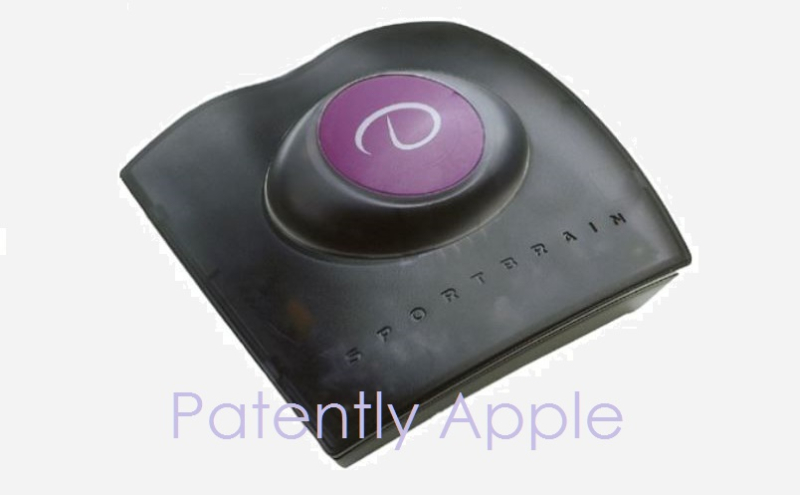 A new patent infringement lawsuit was filed against Apple earlier this week by Sportbrain Holdings LLC. The company sells the 'First Step" Personal Fitness Assistant on Amazon. The company has already sued Fitbit and Nike and so it was inevitable that Apple would be on their list of targets. In particular, the company claims that the Apple Watch and iPhone collect personal/sports related data in a manner that infringes their 2001 granted patent titled "Integrating personal data capturing functionality into a portable computing device and a wireless communication device."

In their formal complaint before the Court Sportbrain states that "Defendant has infringed and continue to infringe Patent 7,454,002 (the '002 Patent), either literally or under the doctrine of equivalents. Upon information and belief, Defendant has infringed and continues to infringe one or more claims of the '002 Patent by making, using, selling, providing, advertising and/or importing, directly or through intermediaries, in this district and elsewhere in the United States, devices for integrating a personal data capturing functionality into a wireless communication device and for analyzing and supplying feedback information to a user through the combined use of the personal parameter receiver, a wireless communication device, a network server, and website in this district and elsewhere in the United States through its website. Each of the Accused Products and Services infringes at least claim 1 of the '002 Patent.

In particular, using at least an accelerometer and/or motion sensor, the Apple Watch and iPhone each separately and/or in conjunction with each other act as the personal parameter receiver by collecting data about the activity of the user including at least recording the number of steps taken by the user when the product is active. For example, the Apple Watch, watchOS3 and Apple companion apps (collectively the "Apple product") connect to wireless communication devices, including smartphones, for capturing personal data via a bluetooth connection." 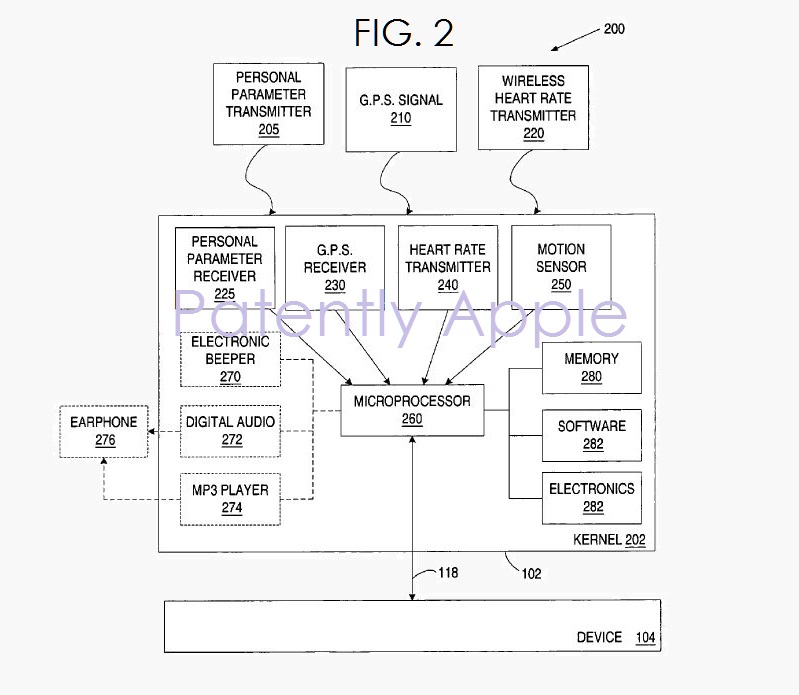 (Sportbrain patent FIG. 2 noted above is a block diagram of one embodiment for a personal data capture device)

The complaint further notes that "The Apple product periodically transmits personal data, including at least step data, from at least a smartphone to a network server over a wireless network. A network server then analyzes the personal data of the user and generates feedback information; this feedback information is posted to a website in at least a graphical and chart form for the user, and includes at least daily and weekly progress and other health and fitness metrics, including at least step count data. The aforementioned website and Apple companion apps also allow a user to compare that user's personal data, at least in relation to the user's friends, and posts that comparison of the personal data.

Defendant has also partnered with third parties to provide additional companion apps, services, and/or fitness tracker devices; to the extent that these third party companion apps, services, and/or fitness tracker devices (in combination with the Apple Watch) carry out the remaining steps of the method in at least claim 1, these acts are attributable to Defendant under a theory of divided infringement, and Defendant directly infringes on the patent-in-suit.

Defendant also has and continues to indirectly infringe one or more claims of the asserted patent by inducing others to infringe, including merchants and end-users through their use of the Accused Products and Services. Specifically, Defendant has actively induced, and continues to induce, the infringement of one or more claims of the ʼ002 Patent at least by actively inducing its customers, including merchants and end-users to use Defendant's devices for integrating a personal data capturing functionality into a wireless communication device and for analyzing and supplying feedback information to a user through the combined use of the personal parameter receiver, a wireless communication device, a network server, and website in this district and elsewhere in the United States through its website. Upon information and belief, Defendant has specifically intended that its customers use the Accused Products and Services that infringe the '002 Patent by, at a minimum, providing access to, support for, training and instructions for, the Accused Products and Services to its customers to enable said customers to use said apparatus, products and services in such a way that infringes the '002 Patent. Even where performance of the steps required for infringement of one or more claims of the '002 Patent is accomplished by Defendant and Defendant's customer jointly, Defendant's actions have solely caused all of the steps to be performed.

Defendant also contributed to the infringement of the patent-in-suit, with knowledge of infringement, violating 35 USC § 271(c) by its design, use, manufacture, importation, distribution, sale and offer for sale of the Accused Products and Service.

Defendant knew that its conduct of advertising and instructing would induce others to use its products and services in a manner infringing the ʼ002 Patent.

Without permission or compensation to Sportbrain, Defendant decided to take Sportbrain's inventions and utilize its patented technology in its Accused Products and Services. On this basis, this infringement has been willful, deliberate, and in reckless disregard of Sportbrain's patent rights.

Sportbrain has complied with the provisions of 35 U.S.C. § 287 to the extent they are applicable. 20. Defendant's infringement has injured Sportbrain and it is entitled to recover damages adequate to compensate it for such infringement, but in no event less than a reasonable royalty, together with interest and costs."

The patent infringement case presented in today's report was filed in the Illinois Northern District Court, Chicago Office. The Presiding Judge in this case is noted as being Judge Samuel Der-Yeghiayan.