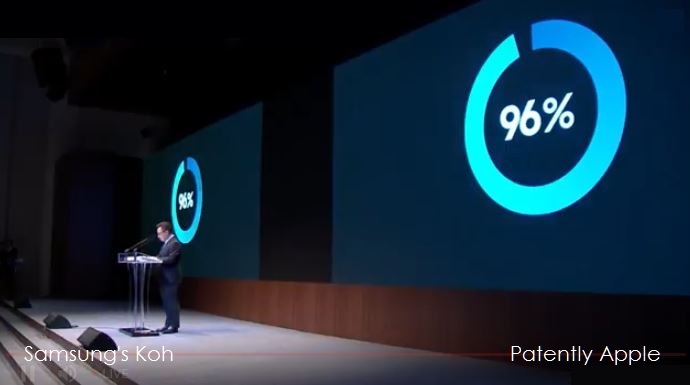 Back in November 2016 Patently Apple posted a report titled "Samsung Holds Needed Pep Rally and Decides Not to Destroy Millions of Note7's in 'Burning Ceremony."' The report noted that Samsung Electronics would dispose of all their Galaxy Note 7s collected due to discontinuation. Right up to the last moment when the decision was made to discontinue the Note7, Samsung was actually preparing to sell refurbished Note 7's to developing countries such as Africa. The idea was to sell the phones at low to medium discounted prices to help improve their damaged image, but the plan was scrapped. The report further noted that in total 4.7 million Note 7's were produced; 2.5 million at the time of the first recall and an additional 1.8 million units after the recall. According to Samsung during their live conference reviewing the causes of the Note7 fires, they announced that they had now recovered 96% of the discontinued phones.

But now that the Note 7 controversy is behind them they've decided to backtrack and and sell the old Note 7s with a new battery back into the market.

The refurbished smartphone market is big business and growing and Apple knows that best – and Samsung wants in on this market apparently.

A new Korean report today states that "Samsung Electronics is considering refurbishing the discontinued Galaxy Note 7 with a new battery in a move to minimize losses from the phone's unprecedented recall last year, Korea Economic Daily reported on Feb. 21.

The report, citing unnamed Samsung sources, said the Korean tech giant plans to launch the refurbished phones as early as in June."

Samsung is scheduled to provide each refurbished Note 7 phone with a new smaller battery and outer shell, along with other key replacement parts.

The report further noted that "In Korea alone, 98 percent of the total 3.06 million Note phones have been returned. Of them, 200,000 units were used for the company's investigation into the cause of battery explosion. An estimated 2.5 million phones are stocked as inventories. About 2.5 million units were sold abroad."

Samsung started selling refurbished models of some flagship phones, such as the Galaxy S6 and Note 4, in the US in September last year. Its archrival Apple also launched refurbished iPhones in June as we reported.

By flooding the market with refurbished Note 7s and new Note 8's in the second half of the year, Samsung's smartphone business is likely to rebound.

Then again, U.S. Consumers beyond the Samsung cult appear to have lost confidence in the brand according to the new Harris Poll on brand reputation. Samsung went from being in the #3 spot in 2015 only to nosedive to #49 in 2016. That's one hell of a drop that could hurt Samsung's Galaxy S8 and Note 8 sales later this year.

And with Apple coming to the party with heavy artillery this year, Samsung is going to have to come up with an incredible line-up or miracle to beat Apple during the holiday quarter 2017.

But for now, the news is simple. Samsung will resell refurbished Note 7 smartphones later this year.