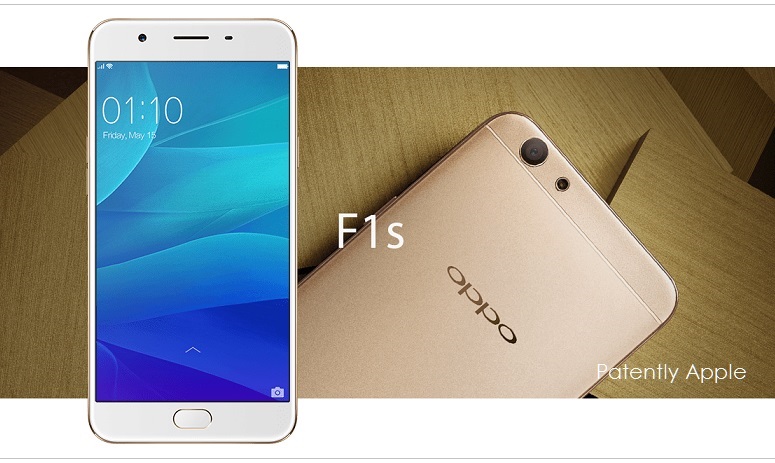 Last week Patently Apple posted a report titled "Apple's Great Quarter Spills Over to Winning the Smartphone Race during the Holiday Quarter." The IDC's global report had Apple taking top smartphone vendor in Q4 2016, edging out Samsung. However, in China where Apple's iPhone sales sank during the holiday quarter, IDC reports that Apple fell to the fourth spot in China.

Today Bloomberg published a report based on the findings of a new IDC report. They noted that "Apple and Samsung have steadily ceded ground in China to aggressive local manufacturers since Xiaomi Corp. came on the scene around 2011. Xiaomi itself was ranked fifth in 2016, as Oppo, Huawei and Vivo phones were the top three sellers, accounting for 48 percent of shipments last year and relegating the U.S. company to fourth spot.

With a line-up of flexible- and curved-screen devices, they look set to dominate the market in 2017. A decline in Apple shipments in the fourth quarter highlighted how the iPhone 7 failed to make as big a splash in the face of escalating competition."

IDC reportedly stated in their report that "Even though the new black colored iPhones caught the attention of consumers, overall, the new launches did not create as much of a frenzy compared to the past."

Apple may regain ground with the next iPhone later this year, the 10th anniversary of the device that ushered in the modern smartphone industry. Apple is expected to showcase the best features it can bring to bear in an increasingly commoditized market.

"Apple's 10-year anniversary iPhone will also likely attract some of the high-end Android users in China to convert to an iPhone," IDC said. 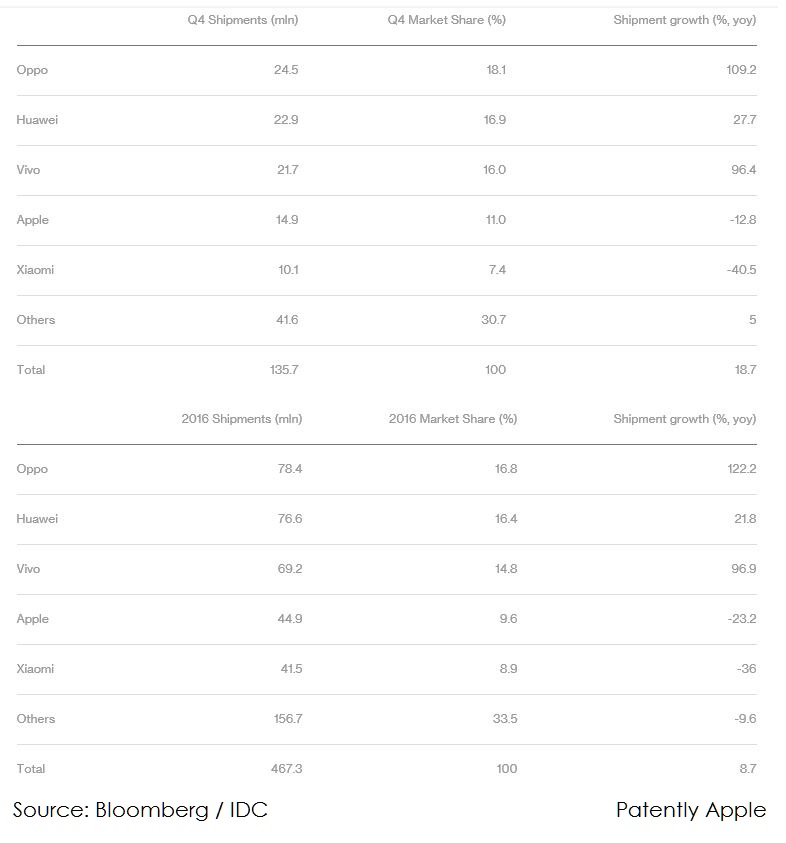 Apple's CEO talked about the Chinese market during Apple's financial results Conference Call for Q1 2017 starting at 29:05 minute mark of their audio replay. Cook said that out of the decline of 12%, 4 points of that was currency related so that they were really down about 8%. Cook pointed to the iPhone 7 being the number one smartphone in China for the quarter. But in the bigger picture, Cook stumbled in trying to talk about China, shifting to Mac sales and iPad sales up or that they did well on Alibaba. But in truth, China's smartphone vendors are beating Apple fair and square with quality designs and much lower prices. Something Cook didn't want to admit outright. He just said that they have challenges. Yes, the challenges are Oppo, Vivo and Huawei.

During Apple's last Financial Conference Call, their CFO noted that even though sales were down in China in Fiscal Q4, Apple would return to growth in China in the December quarter. That didn't happen.

Will the anniversary iPhone model be able to reestablish their lead in China, or has the ship just sailed out of their reach going forward with Chinese smartphone vendors now in total control?

There's no doubt that hot innovation and advanced features could be the way Apple regains their leadership in China in Q4 2017, but lower prices have clearly become the weapon that is currently winning the day and that's unlikely to change short of the iPhone being reinvented.