Cool: Apple Invents a Dual Display MacBook that a User will be able to use Outdoors with Sunglasses on

Today the US Patent & Trademark Office published a patent application from Apple that reveals their most recent invention relating to dual display MacBooks. Apple was first to patent dual display notebooks back in 2010-2011 with reconfigurable interfaces that would be able to double as a keyboard, a game pad, an artist's pad and more. In this advancement of the dual display notebook Apple reveals adding polarizer layers and other optical layers in the displays that could be configured to provide a viewer with the ability to view images on the displays while wearing vertically polarized sunglasses and to suppress reflections of light emitted by the first display off of the second display. For the record, while Apple may have patented the idea ahead of their competition, waiting this long to come to market has allowed Lenovo to be first to deliver a slick dual display notebook to market. We covered that story and provided a video of the unit that you could view here.

Technically speaking, Apple notes that polarizer layers and other optical layers such as wave plates in the dual displays may be configured to provide a viewer with the ability to view images on the displays while wearing vertically polarized sunglasses and to suppress reflections of light emitted by the first display off of the second display.

The first display may be a display such as a liquid crystal display that has inner and outer linear polarizers. The outer polarizer may have a transmission axis that is parallel to horizontal edges of the first display. 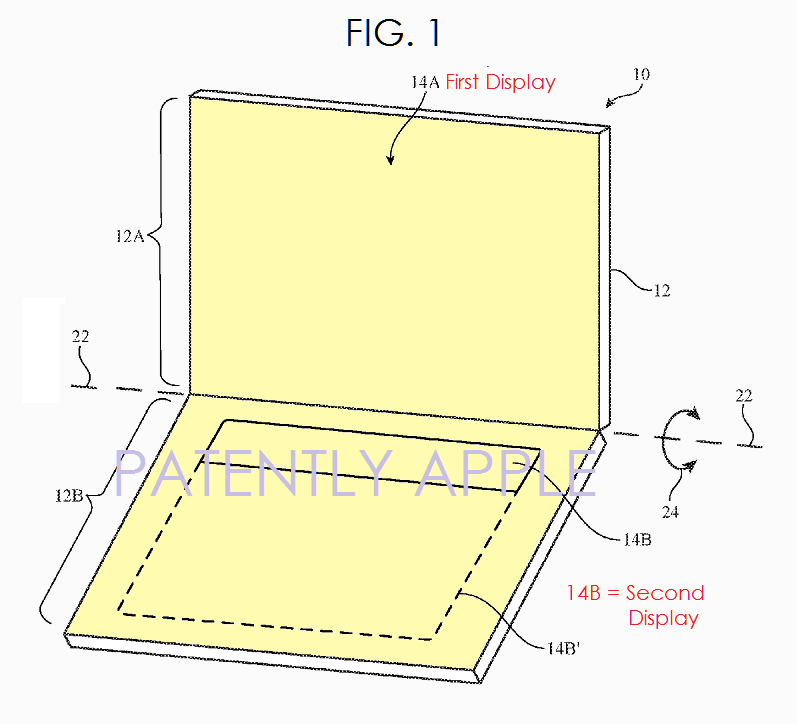 In Apple's patent FIG. 7 below we're able to see polarizers and other optical layers that may be incorporated into displays in an electronic device in accordance with an embodiment. 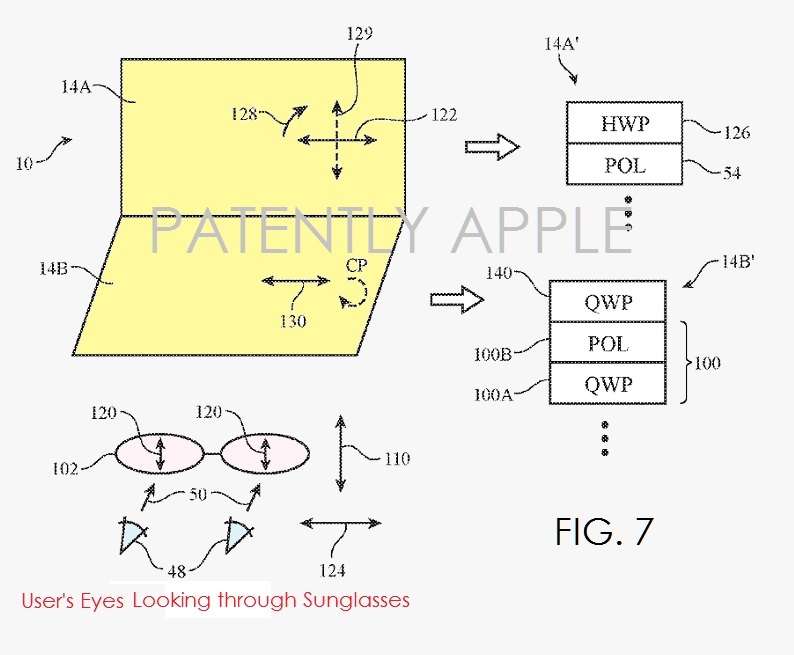 In FIG. 7 you're able to see viewer #48 at the bottom of the graphic viewing displays 14A and 14B through sunglasses #102 in direction #50. Each lens in the sunglasses has a linear polarizer with a transmission axis #120 that runs vertically, parallel to vertical dimension #110. Display 14A may be a liquid crystal display having a linear upper polarizer such as polarizer.

Display 14A may use negative liquid crystal material and may exhibit enhanced off-axis viewing performance when pass axis #122 of polarizer #54 is oriented horizontally.