Contrary to a Gloomy Report Published this Week, the iPad remained the #1 Tablet in the World in Q4 2016

In Q3 2016 IDC reported that Apple was the top tablet vendor with 21.5% market share. Today IDC confirmed that in Q4 2016 Apple was once again the top tablet vendor with 24.7% market share. But don't tell that to VentureBeat who thinks that Apple's iPad business is a complete disaster with their report byline being, "iPad in free fall after sales plunged 22% in Q1." Wow, 'plunged' and 'free fall' all in one byline. And yet Apple is sitting as the leader in tablets again for Q4 2016. How far did Apple plunge when they went from #1 in Q4 2015 to #1 in Q4 2016 with a gain in market share over the previous year? VentureBeat should have instead reported on Microsoft's Surface performance that was up for the year but still couldn't break into the top five tablet vendors in the world. Their dramatic byline should have been, "WTF is wrong with Microsoft who talks a big tablet game but still can't even get in the top five global vendors list." Now that would have at least made sense. 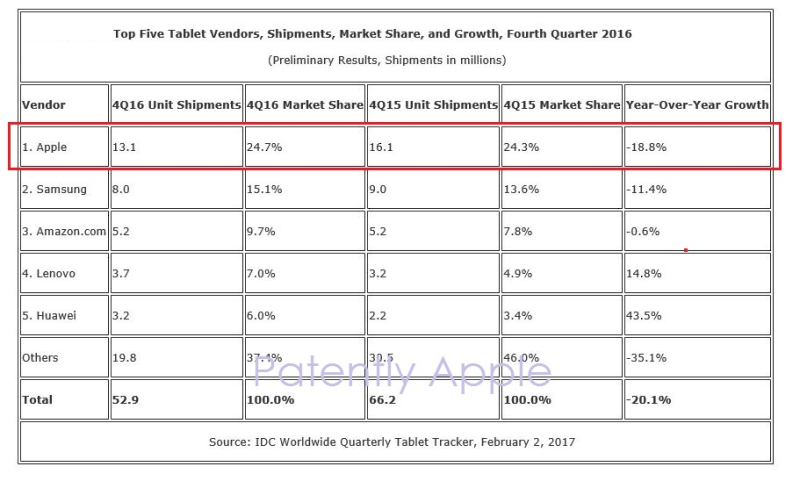 In a report yesterday we noted that Apple's CEO Tim Cook stated that he saw 'Some Exciting Things' coming to the iPad. And Apple's CFO quoted NPD market research on Tuesday during Apple's conference call (at the 17: 40 mark to be exact) pointing to the fact that Apple's iPad has 85% of U.S. market share in tablets priced above $200.

While Tim Cook noted that Apple had supplier issues in the holiday quarter for the iPad that would continue through to Q1 2017, he was confident that the iPad would get back on track shortly after. So Apple is likely to remain the king of tablets for the first half of 2017 at minimum.

Statistically overall, IDC reports that "Consumer spending during the holiday quarter of 2016 was clearly not aimed at consuming tablets as the market continued its spiraling decline. The fourth quarter of 2016 (4Q16) marked the ninth consecutive quarter that tablet shipments have declined. According to preliminary data from the International Data Corporation (IDC) Worldwide Quarterly Tablet Tracker, vendors shipped 52.9 million tablets in the fourth quarter, which was a decline of 20.1% from the same quarter one year ago. Similarly, shipments of 174.8 million units for the full year 2016 were down 15.6% compared to 2015, marking the second straight year of declining shipments.

IDC's Ryan Reith, program vice president with IDC, further added that "The sentiment around the tablet market continues to grow stale despite a lot of talk about vendors pivoting their product portfolios toward the detachable segment.

Reith further noted that "Vendors that have historically led the notebook PC market are also talking about expanding their product portfolios to include more detachable tablets. IDC believes the second half of 2017 will bring a wide range of new detachable devices from the notebook PC OEMs as well as those playing primarily in the smartphone space." What Reith is referring to is the Windows 10 + Qualcomm development that was announced back in December. I wrote about that in yesterday's report more in depth. You could read more of the IDC report here.