Home Archives Contact Us Subscribe Twitter MeWe Facebook Patently Mobile
No, Apple's CEO Never Said he was Considering Suing the Government
While Apple's CEO see's 'Some Exciting Things' coming to the iPad, others see nothing but Doom and Gloom

In a new smartphone statistical report that surfaced late yesterday, Strategy Analytics Director Lindau Sui announced that "Global smartphone shipments grew an improved 9 percent annually from 403.0 million units in Q4 2015 to 438.7 million in Q4 2016. This quarter was the smartphone industry's fastest growth rate for over a year. More importantly, the report quoted Neil Mawston, Executive Director at Strategy Analytics, who added that "Apple shipped 78.3 million smartphones worldwide and captured 18 percent market share in Q4 2016, rising a steady 5 percent annually from 74.8 million units in Q4 2015. This was the iPhone's best performance for over a year, as Apple capitalized on Samsung's recent missteps. 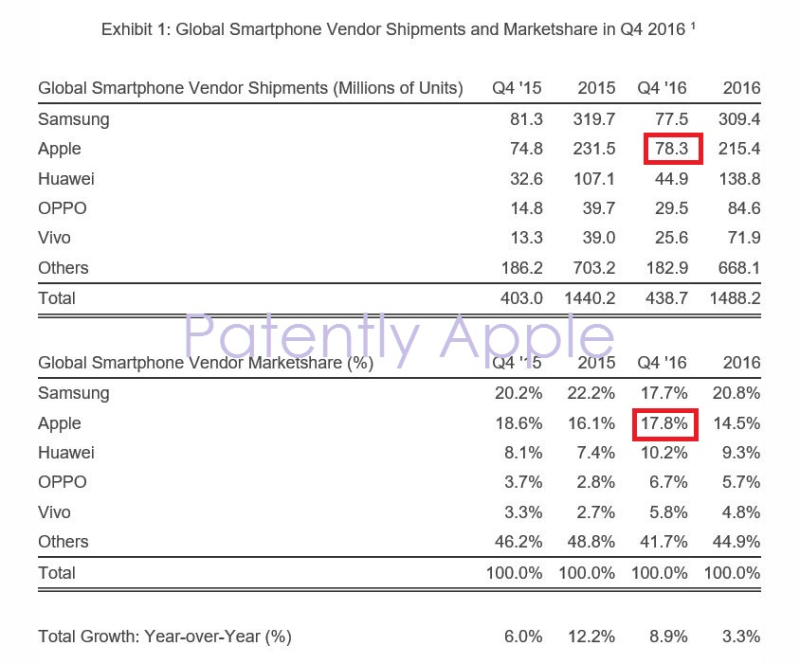 To be fair, it was a little bit of a fluke for Apple to be in the position of leader by a hair considering that Samsung's Note7 disaster cost them the lead, not because Apple was a powerhouse phenomenon – even though they had a record breaking quarter. On the flip side, Apple doesn't sell a wall of cheap phones and old cell phones to make up their numbers, so for quality vs. quality, Apple's win is truly sweet.

The report further noted that "Samsung shipped 77.5 million smartphones worldwide in Q4 2016, dipping 5 percent annually from 81.3 million units in Q4 2015. Samsung lost momentum in the quarter as a result of its Note 7 battery fiasco. Samsung captured 18 percent share for the quarter and 21 percent share for the full year, its lowest level since 2011. Samsung will be banking on the rumored Galaxy S8 model in a few weeks' time to reignite growth and return to the top spot in quarterly smartphone shipments.

To learn about Apple's competitors Oppo and Huawei's performance for the holiday quarter see the full Strategy Analytics report here. Whether IDC or Gartner's smartphone reports later this month will support the findings of the analysts over at Strategy Analytics remains to be seen – so stay tuned.

To review Apple's great Q1 2017 / Calendar Q4 financial results check out our report here. To review what Apple's CEO thoughts and color are pertaining to Apple's performance for the holiday quarter click here.