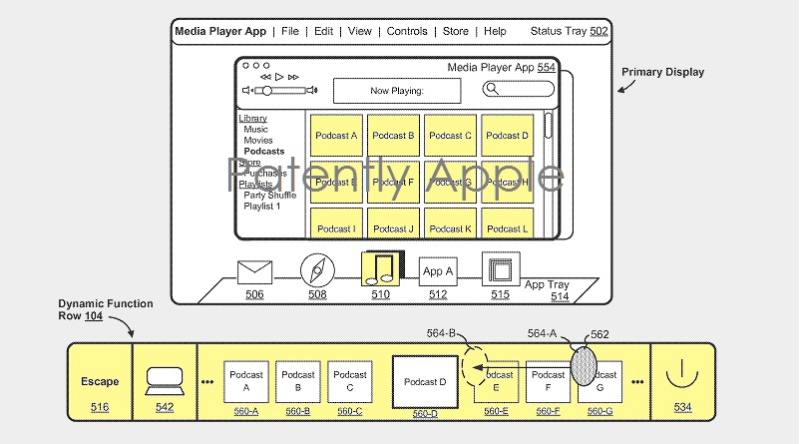 In December Patently Apple posted a report titled "Apple Patent Filing Shows new MacBook Pro Touch Bar Possibly coming to their Magic Keyboard and beyond. Today Patently Apple has discovered a new patent filing that was made in Europe this week that covers Apple's Touch Bar. It's made abundantly clear that Touch Bar will go beyond the MacBook to the iMac which is mentioned by name in the patent even though the patent figures show a tower based desktop. The patent also shows Apple bringing functionality and interface elements relating to iTunes, Podcasts and games. Reportedly Apple issued an update in December that may have covered some aspects of iTunes.

Conventional dedicated keyboards are static and fixed in time regardless of the changes on a display. Furthermore, the functions of software application displayed on a screen are typically accessed via toolbars and menus that a user interacts with by using a mouse. This periodically requires the user to switch modes and move the location of his/her hands between keyboard and mouse. Alternatively, the application's functions are accessed via complicated key combinations that require memory and practice. As such, it is desirable to provide an I/O device and method that addresses the shortcomings of conventional systems.

Such devices and methods also reduce the amount of mode switching (e.g., moving one's hands between keyboard and mouse, and also moving one's eyes from keyboard to display) required of a user and produce a more efficient human-machine interface.

In accordance with some embodiments, a method of updating a dynamic input and output device is performed at a computing system such as a MacBook as noted below. 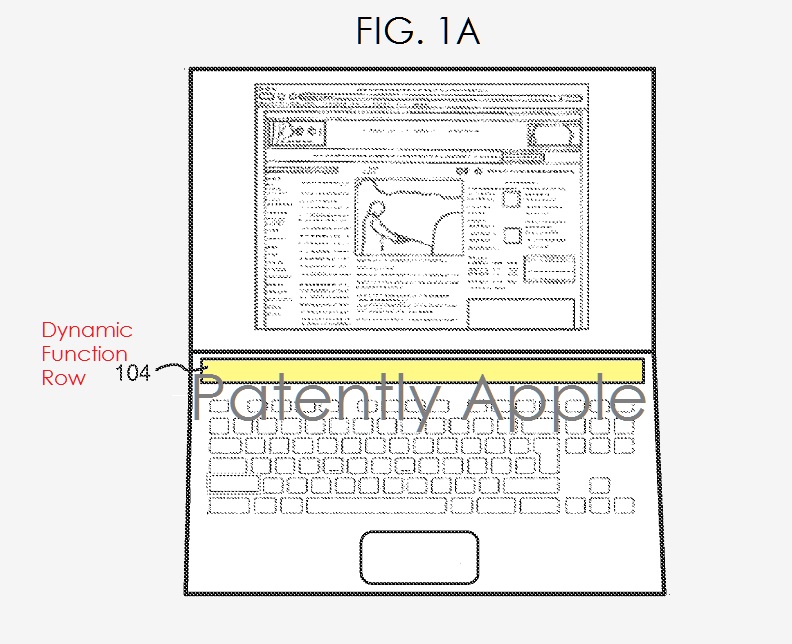 Apple notes that in some embodiments, the housing is separate and distinct from the primary display (e.g., desktop computing system 200, Figures 2A-2C). 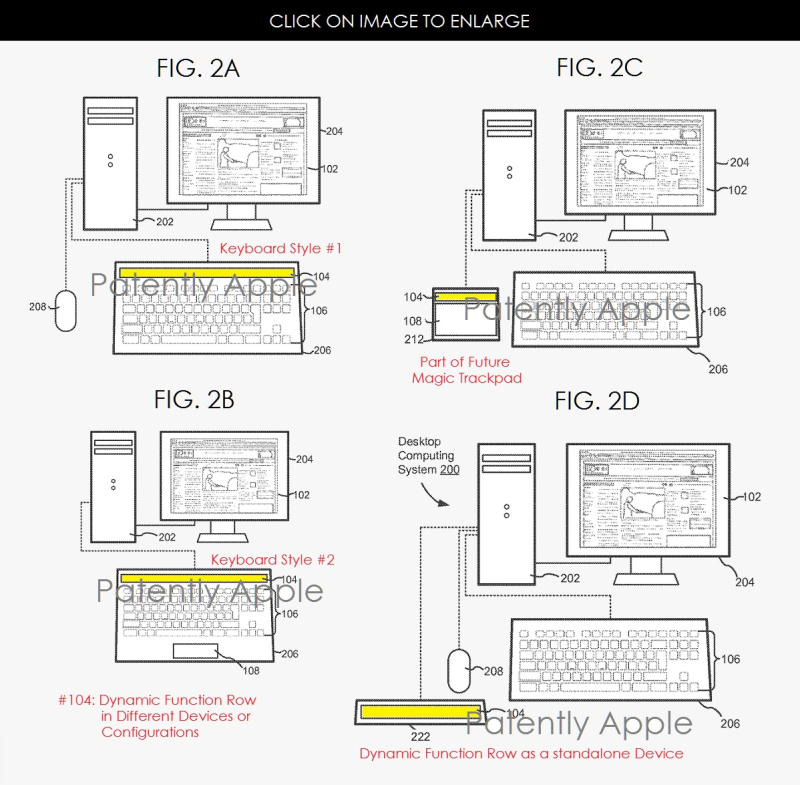 New Apps in the works for Touch Bar 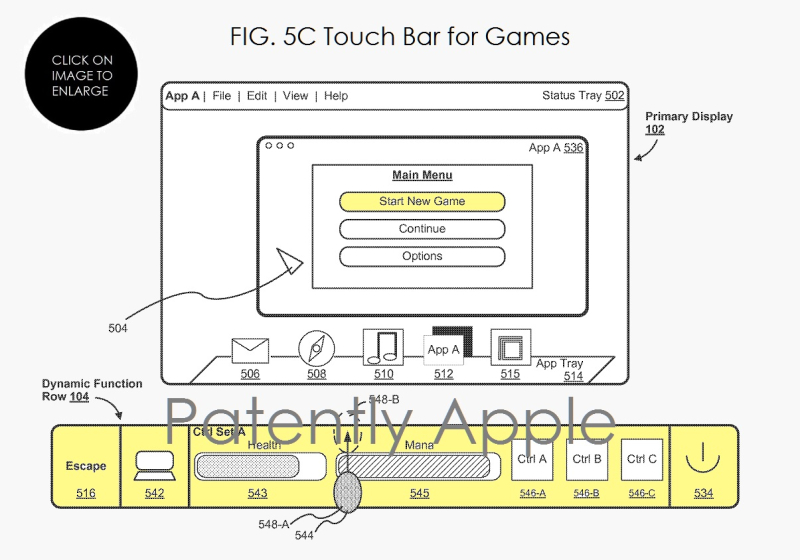 An update for the MacBook brought iTunes to the Touch bar in a December update according to MacRumors here. I'm unaware of how elaborate the update was. Below are patent figures for iTunes and Podcasts from the European filing. 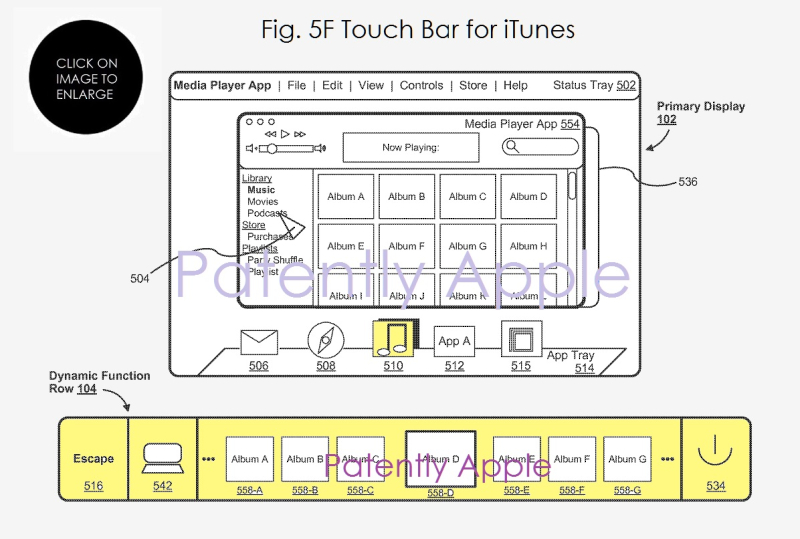 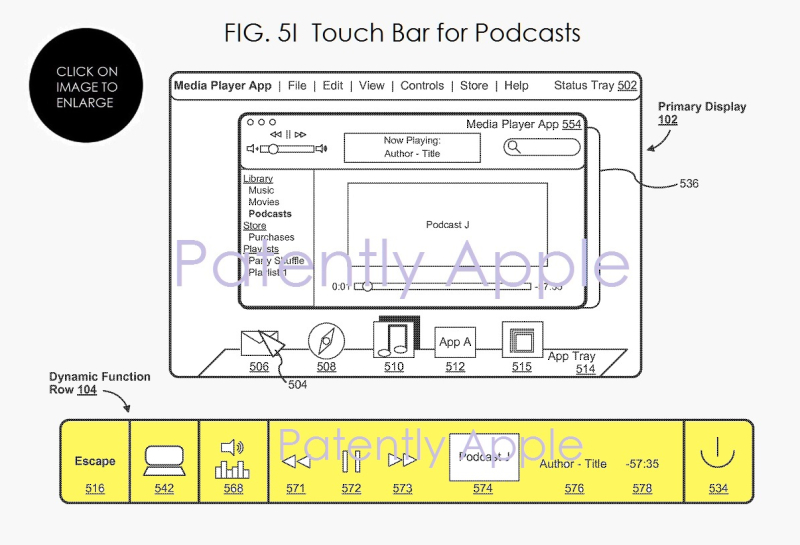 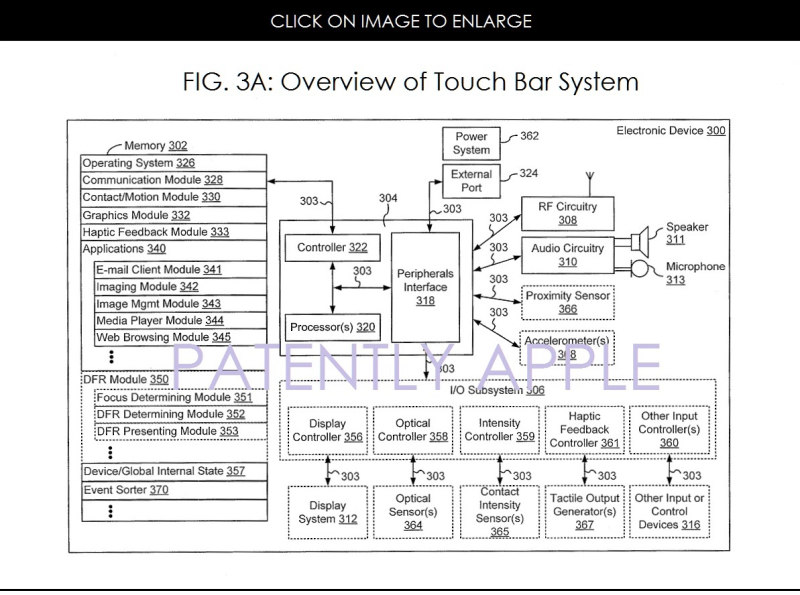 Apple's patent application was filed back in Q1 2015. The filing in Europe came from an unknown location in Eastern Russia. Okay, Apple really wanted this to remain secretive prior to this feature launching in 2016. Considering that this is a patent application, the timing of such a product extending to the Apple desktops is unknown at this time.

Posted by Jack Purcher on February 19, 2017 at 11:25 AM in 1A. Patent Applications, Apple Accessories, Apple Macs , Display Technology | Permalink | Comments (0)