Home Archives Contact Us Subscribe Twitter Facebook MeWe Patently Mobile
Apple and India are still in Negotiations over one Point of Contention with both sides working on a Compromise
Korean Prosecutors Plan to Summon Samsung's Vice Chairman Lee on new Evidence, may Seek Arrest Warrant 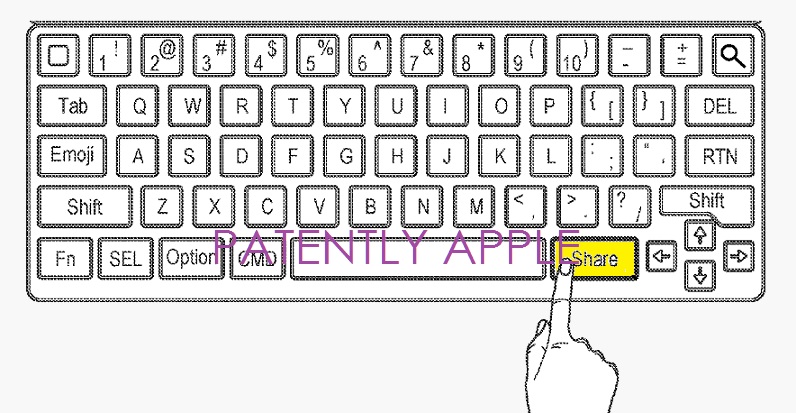 Earlier this week the US Patent & Trademark Office published a patent application from Apple that could be revealing what the iPad Smart Keyboard 2 may entail. Whether Apple will implement all of the new additions, some of the additions or even more this year is unknown at this time. The key additions include new 'Share' and 'Emoji' keys along with an easy way to connect to Siri and more. Please note that all of the graphics/patent figures below could be enlarged for easier viewing by simply clicking on them. 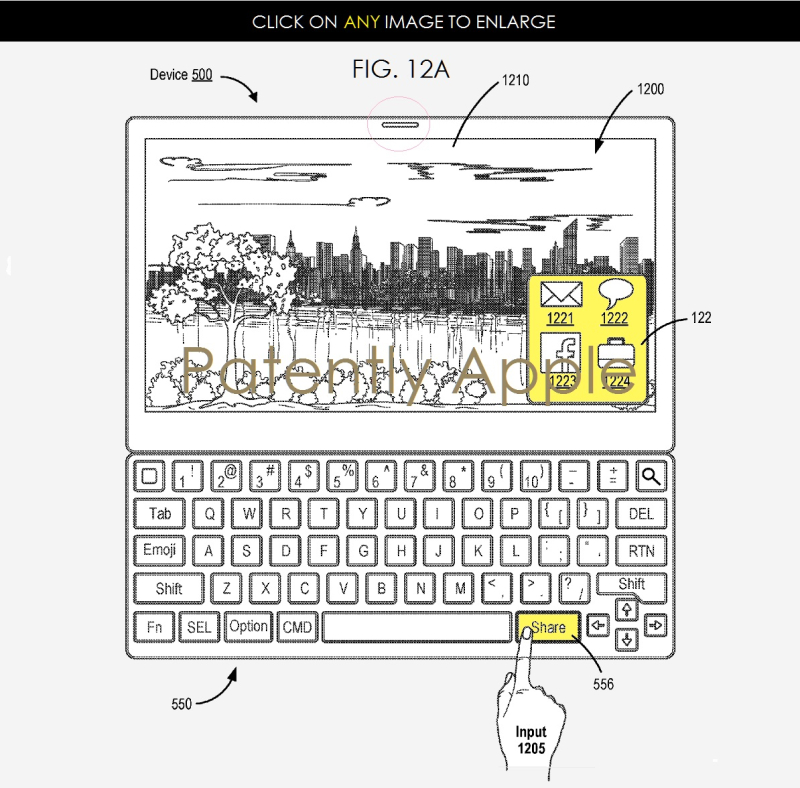 Apple's patent FIG. 12A noted above illustrates an all-new "Share" key #556 on the iPad Pro keyboard. Hitting that key will pop open a window with content-sharing applications such as email, messaging, Facebook and the printer. The social media keys could include Instagram, Twitter and more. In FIG. 12C below I've also highlighted another new key for accessing Emoji is self-explanatory. 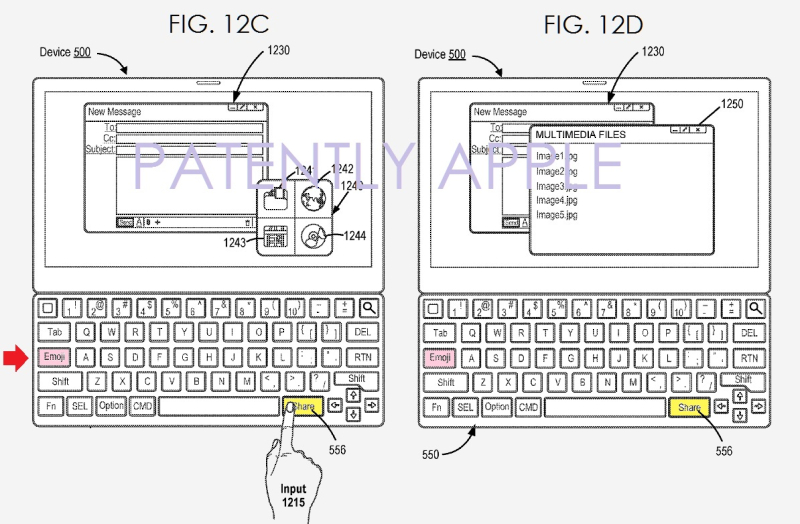 Side Note: This is a utility patent and therefore the image of the iPad doesn't have to be picture perfect because it's not a design patent. However, with that said, you have to wonder if the Home Button was purposely omitted as a hint of what's to come or just convenience for the graphic. Secondly, we see an oblong looking button at the top (or side, depending on the iPad's usage). Is it a button or is the artist simply pointing out the general camera area? It's not a focus of the patent, so it's just an observation to keep in mind.

Back in April, Cult of Mac posted a report about 6 must-know shortcuts for every Smart Keyboard owner. At the end of the report they noted that "There's no doubt Apple will improve upon the Smart Keyboard over time. Would I like volume buttons or quick access to Siri right from the keyboard …" Well, it looks like Apple was already working on that feature as the article was written because the filing was made in March 2016, a month before the Cult's report. 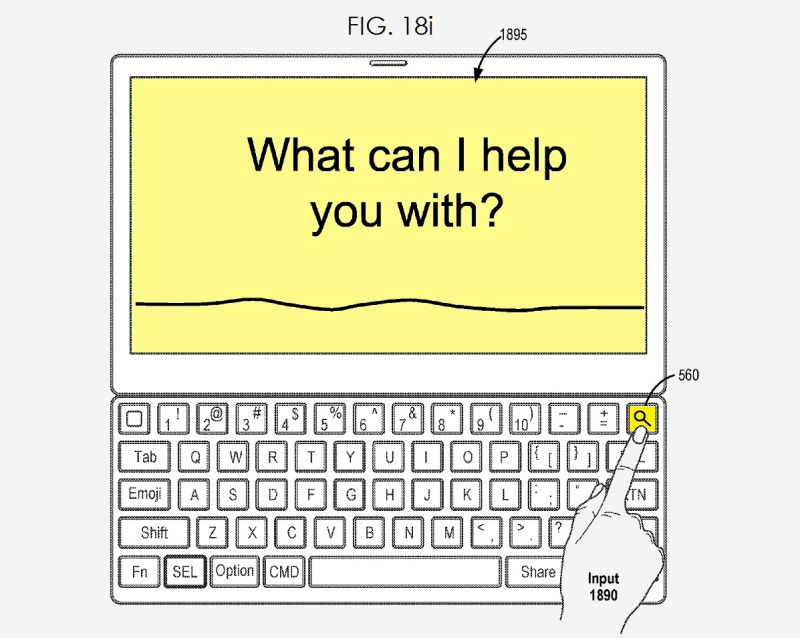 The user only needs to hit the search button as noted in patent FIG. 18i above a certain number of times and Siri will be activated. The patent states that "In some embodiments, the device activates an interface to a virtual assistant configured to perform a search function and prepares to detect voice inputs. FIG. 18I illustrates an exemplary graphical user interface #1895 that prompts the user to provide a voice input to the virtual assistant in response to activation of key #560 by input #1890," which is the user hitting the search button.

By hitting the Search button once will pull up a menu as noted in FIG. 18C below that illustrates Settings, Camera, Photos, clock, Messages, Calendar, notes and more. In certain applications as noted in FIG 18D below, a browser search field will pop-up if you're highlighting a word or phrase in a word processor, email, or browser page, hitting the search button will open Google or other search service. 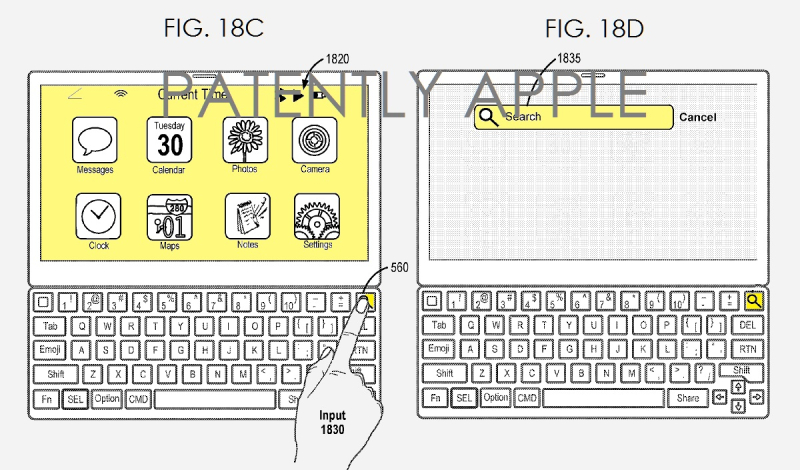 Laptop's Tom's Guide for iPad Pro Keyboard shortcuts is an interesting page. But the shortcuts are oddly matched. Like a 'paste' command is Command + V. Apple's patent filing seems like they've revisited the command section of the keyboard to simplify it. Now 'paste' will logically be Command + P (duh). Other shortcuts that are logical are noted in the two patent figures below. 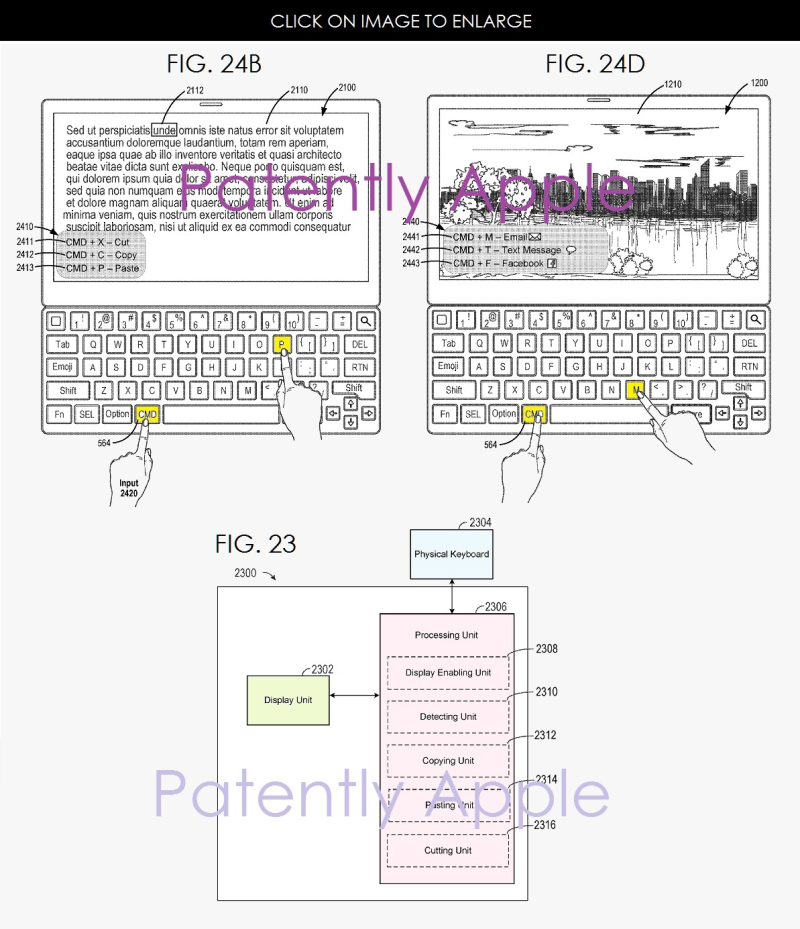 Apple's patent FIG. 23 is a simple overview of their next generation iPad Pro Keyboard system.