The U.S. Patent and Trademark Office officially published a series of 48 newly granted patents for Apple Inc. today. In this particular report we cover a new audio speaker system for the iPhone that increases a magnetic field that may generate a larger mechanical force on the voicecoil to improve acoustic performance while reducing stray magnetic flux that may prevent demagnetization of nearby magnetic strip cards. 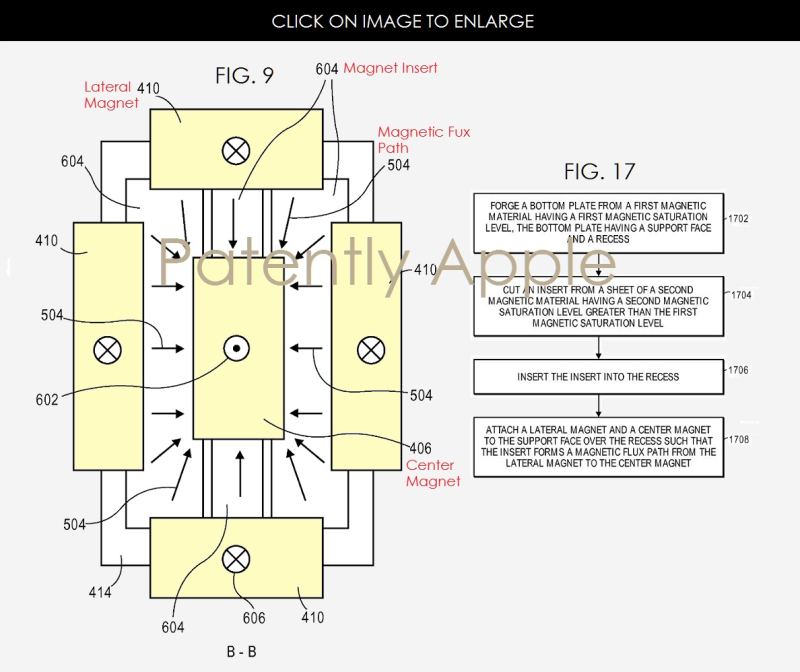 Apple's patent FIG. 9 is a cross-sectional view, taken about line B-B of FIG. 6, of a magnetic system of an audio speaker; FIG. 17 is a flowchart of a method of manufacturing an audio speaker having a high-saturation magnetic insert in a recess of a bottom plate

In some cases, this stray flux can leak into nearby low coercivity items, e.g., hotel keys, gift cards, and parking tickets. The stray flux may then cause the low coercivity items to demagnetize and lose stored data. Thus, a magnetic system having components with higher saturation limits may allow the magnetic field in the magnetic system to be increased and the stray magnetic flux to be reduced within a compact form factor.

The increased magnetic field may generate a larger mechanical force on the voicecoil to improve acoustic performance of the audio speaker, and the reduced stray magnetic flux may prevent demagnetization of nearby magnetic strip cards.

Apple's granted patent 9,571,936 was originally filed in Q2 2015 and published today by the US Patent and Trademark Office. To review this highly complex invention click here.