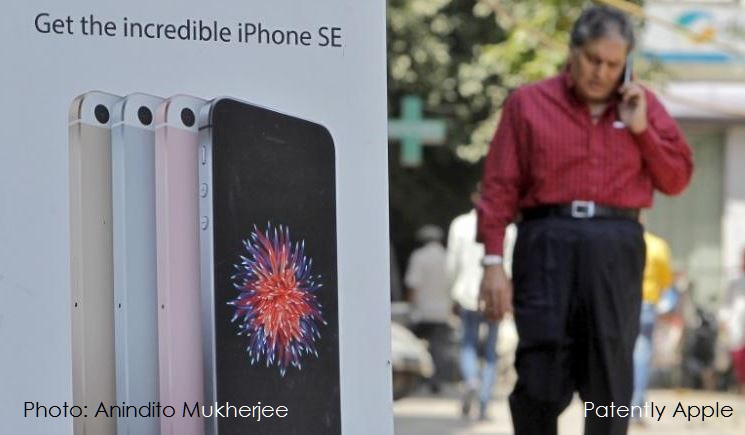 In the coming months Apple will start assembling its lowest-priced iPhone SE model at a contract manufacturer's plant in the southern Indian technology hub of Bengaluru. The rumor is that Apple will kick start production of the iPhone SE first because it's the least expensive iPhone that sells for US$424 on Amazon's Indian site. Even at that price Apple's iPhone almost doubles the average smartphone price of $225 by competitors like Vivo, Oppo, Xiaomi and Samsung who currently dominate the market. In most cases competing smartphones offer a 5 to 5.5" display for that price compared to Apple's tiny 4-inch. For most, these phones are the high end of what they could afford. Overall, 70-80% of mobile phones in India are selling for US$149. Manufacturing in India will help Apple lower the price of the SE model and at least get them in the game.

To lower prices, Apple has been seeking to set up local production and has been in talks with the Indian federal government regarding issues such as tax concessions. India's Economic Times (ET) reported yesterday that Apple planned to initially assemble 300,000 to 400,000 iPhone SE handsets at the Indian plant but but could be less if the plant's startup is slower than anticipated. Production is reportedly set to begin in April.

A senior government official told ET that "It is Apple's first such venture in India. The demands that they have made [with the Indian Government] are for the larger plans of the company to really scale up manufacturing in India."

The ET report further stated that stiff competition has hampered Apple from reaching their goal of selling 10 million iPhones in India by 2016. The only way to reach their goal is to manufacture locally and Apple wants to go full throttle in order to hit their internal target. Technically, Apple only sold 2.5 million iPhones in India in 2016. While it was a new record it was far from Apple's target.

The good news, if any, is that Apple captured 62% market share of phones selling more than US$450, replacing Samsung which held 35% market share in smartphones over US$450.

Yet in context that's really playing a numbers game, as we noted at the top of the report that 80% of the market is buying phones in the US$149 range, with the mid tear completely dominated by Apple's competitors. While there isn't a statistic that we could find to determine the size of the market that Apple reportedly dominates, I would suspect it's a fraction, as in the 2% range. So it's kind of a meaningless statistic at present. Though as the middle class grows, this is the market Apple will continue to win over.

The ET report lastly noted that earlier this week State Chief Minister Devendra Fadnavis met senior officials from Foxconn, Apple's biggest contract manufacturer, and offered to compensate for the 11.5% import duty in case talks with the Centre that did not yield a positive result.

Although the report failed to verify whether Foxconn was in talks for an iPhone plant or one for Xiaomi or other OEM, the fact is that the overall conversation was about Apple so this could be an important development to keep an eye on going forward.