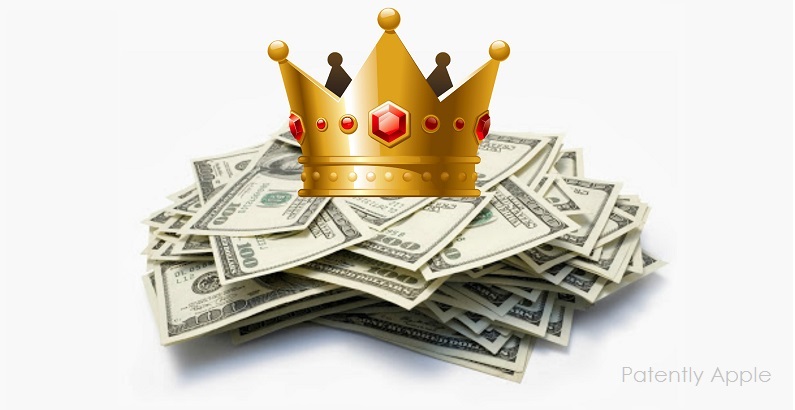 In November Patently Apple posted a report titled "For Six Quarters Straight Apple's iPhone has taken 91% or more of the Smartphone Industry's Profits." Today we learn that Apple has extended their streak to 7 quarters with Q4 2016 raking in 92% of smartphone industry profits. Hail Apple.

Apple Inc. continues to capture a huge share of the premium global smartphone market, with the iPhone maker generating 92 per cent of industry profits in the fourth quarter of calendar 2016, according to Canaccord Genuity.

Canaccord analyst T. Michael Walkley added that "Apple posted record results with iPhone sales coming in at 78.3 million, at a strong average sale price of US$695 due to a healthy mix of Plus models. That compares to Samsung at US$182 for its 77.5 million smartphones and 12.5 million feature phones sold.

Walkley lastly noted that he expects to see iPhone sales slow in the next few months, as consumer get ready for the launch of new products from both Apple and Samsung later in 2017.

After the news of Apple taking their sixth quarter lead in profits with over 91% last month, Strategy analytics noted that Huawei was one of the most profitable Android OEMs on the market capturing 2% share of smartphone profits. The lead that Apple has built over a long period of time is staggering and an embarrassment to Google's entire Android world of partners.