On Thursday Patently Apple posted a patent report titled "To Avoid Note 7 Style Battery Fires, Apple Patent Reveals Instituting a new Heat Dissipator made of Graphene." We had noted in the report that KGI analyst Ming Chi Kuo talked about Apple will be adding a new graphite layer will be added to Apple's next-gen iPhone because wireless charging will generate more heat that could lead to fires. Today Patently Apple discovered yet another new patent from Apple that was published yesterday that relates to a heat spreader that includes multiple layers of anisotropic material such as pyrolytic graphite to conduct thermal energy. Multiple graphite sheet layers may be laminated and each sheet may be thermally connected to one or more thermal energy sources in a portable electronic device. Our report also provides a video discussing pyrolytic graphite sheets from Panasonic. It appears that this could be what KGI's analyst was referring to.

Heat spreaders are used in many electronic devices to provide a thermal path from a heat source to an outside medium. Heat spreaders typically dissipate heat by conduction, transferring heat from one solid to another. Heat spreaders also transfer heat by thermal radiation to a body with a different surface temperature.

Apple's invention relates to, includes or takes the form of heat spreaders that move heat between a heat source in a portable electronic device and a heat exchanger whose surface area and geometry are more favorable than the heat source.

One sample embodiment may take the form of a heat spreader, comprising: a group of layers, each layer in the group formed from an anisotropic thermal material; at least one contact region adjacent each layer; wherein each layer is affixed to an adjacent layer.

Yet another embodiment may take the form of a portable electronic device comprising: a heat source; and a heat spreader connected to the heat source and comprising a group of layers, each layer formed from an anisotropic thermal material; wherein a layer of the group of layers is thermally connected to the heat source; and the layer preferentially conducts heat in a first direction as opposed to in a second direction.

Although it's a little geeky, the video below explains the advantage of pyrolytic graphite sheets from Panasonic used in the context of a heat spreader material like Apple is covering. 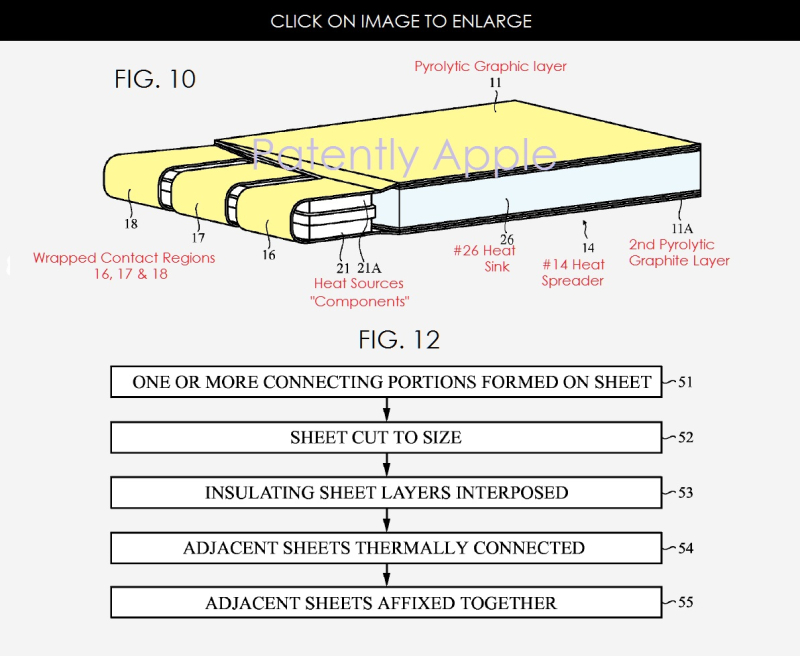 Apple's patent FIG. 10 noted above shows a heat spreader wrapped around and engaging heat sources on opposing sides of a substrate.

As one non-limiting example, heat spreaders described in Apple's patent filing may be formed from pyrolytic graphite in whole or in part, insofar as pyrolytic graphite exhibits the aforementioned anisotropic heat transfer function. Rather than dissipate through the thickness of the graphite sheet, heat travels primarily along the length of the sheet thus conducting heat in a desired path to a particular destination within or outside of the portable electronic device.