Home Archives Contact Us Subscribe Twitter Facebook Patently Mobile
Apple Advances their 3D Mapping and Optical Scanning Technology
Cool: Apple Invents a Dual Display MacBook that a User will be able to use Outdoors with Sunglasses on

Patently Apple's other blog called Patently Mobile has covered the advances of flexible displays from Samsung for years. You could check out some of the major ones here: (one, two, three and four. The most interesting ones relate to a possible scrollable smart device. Today the US Patent & Trademark Office published a patent application from Apple that reveals their work on flexible displays and electronics that will extend to specialty applications. Beyond applying their revealed technology to known devices such as a smartphone or tablet, Apple see's the technology being widely adopted into smart clothing, smart windows, applications in vehicles, furniture and more. One of the inventors on the patent previously worked for a company where they made flexible medical devices, skin-mounted epidermal electronics and even next gen flexible processors. So this is a serious invention that is likely to work through the system over time and eventually to market. It's not just pie in the sky thinking.

Traditional displays and touch sensors mounted in a device may be subject to stress-induced failures. As devices with flexible displays are being considered for the future, Apple has to invent new and improved input-output methodologies to accommodate such displays.

Apple notes that their invention relates to a flexible input-output device such as a display or a display with integrated sensors and haptic output may be formed from an elastomeric substrate layer.

An array of through-hole openings may be formed in the substrate to create a mesh-shaped substrate that can be stretched in one or more dimensions. The signal paths that extend between the openings to interconnect the electrical components may have serpentine shapes that help to accommodate stretching.

Apple's patent FIG. 18 noted below is a perspective view of an illustrative stretchable lighting unit in accordance with an embodiment of this invention. 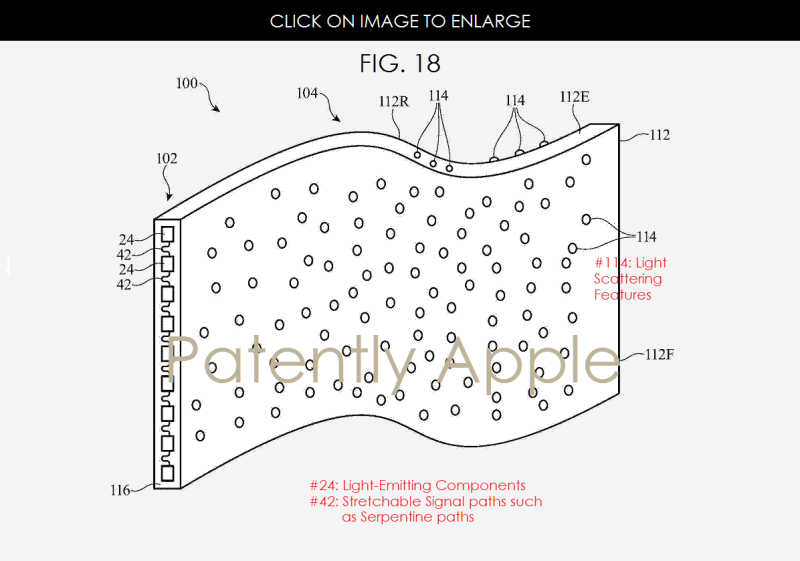 Light may be emitted into the interior of this layer along the edge (edge surface) #116 or may be otherwise launched into layer #112. In the example of FIG. 18, the light source has a plurality of light-emitting components #24 (e.g., components containing light-emitting diodes and/or other circuitry) along the edge that are electrically connected to control circuitry and/or each other using paths #42 (e.g., stretchable serpentine signal paths or other stretchable signal paths). Light from the components in source #102 is launched into layer (light guide layer) #112 and is distributed throughout the layer by total internal reflection. 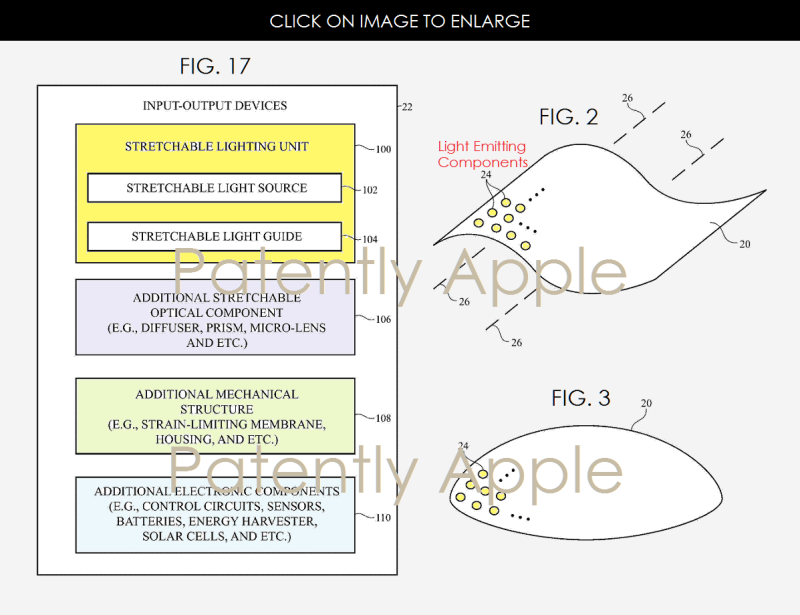 Applicable to Traditional Types of Devices

Apple's patent application 20170040306 is actually a continuation patent that was filed back in Q4 2016. Considering that this is a patent application, the timing of such a product to market is unknown at this time.

One of the inventors listed on Apple's patent filing is Yung-Yu Hsu, a Sr. Emerging Display Technologist. He's noted as a seasoned mechanical and materials research engineer/scientist with extensive experience in design, microfabrication and testing of microelectronic packaging, sensing technology and flexible/conformal/stretchable electronics for wearable and medical applications.

Prior to working at Apple, Hsu worked at MC10 covering medical devices such as flexible sensors (temperature, contact, force, ECG) for interventional catheters, to flexible and stretchable wearable devices such as skin-mounted epidermal electronics.

The Skin ID Tattoo was a one-time project Motorola and Google. Patently Apple covered this in a report three years ago titled "Motorola Skin Tattoo Patent Contains Bizarre Big Brother Twist." Our original report on this was posted in 2013 titled "Apple, Motorola Look to New Authentication Methods." In the latter report Walt Mossberg interviewed Regina Dugan about this technology. Dugan had worked for DARPA and eventually went on to work for Google and now Facebook.

Lastly, in addition to wearable devices, Hsu was leading the mechanical and materials design and process integration for embedded ultra-thin chips (micro drivers and processors, etc.) and stretchable interconnects.

Posted by Jack Purcher on February 09, 2017 at 06:25 AM in 1A. Patent Applications, Devices, Components, Displays - Flexible, Foldable & Scrollable | Permalink | Comments (0)