The U.S. Patent and Trademark Office officially published a series of 48 newly granted patents for Apple Inc. today. In this particular report we cover a granted patent Apple received for a LuxVue patent. Apple acquired LuxVue in 2014. 99.9% of the patent is about advanced Micro LED displays in great detail. The displays could be used for future devices like a heads-up vehicle display, a future HD television, Macs and possibly iDevices. However, Apple is committed to iPhones with OLED displays from Samsung and so this technology is unlikely destined for the iPhone 8.

Apple's newly granted patent covers their invention relating to a display technology inherited from LuxVue, a Micro LED company they acquired in May 2014. Apple's next-gen iPhone are based on OLED especially the iPhone 8.

The LuxVue granted patent notes that the display system described may include other components, such as a power supply, e.g., battery (not shown). In various implementations, the display system may be a part of a television, laptop, computer monitor, automotive heads-up display, digital camera, handheld game console, ebook display and could in the future apply to other mobile devices.

The key to this display technology is based on integrating interactive microchips that is highlighted throughout LuxVue's patent claims. What particular product has in mind for this technology is unknown at this time but Micro LEDs are not scheduled for the iPhone and iPad for as far as they eye could see.

The curious aspect to the invention is that it could be used on a future iPhone when Apple is ready to depart from their first generation OLED displays debuting this year.

The use of Infrared technology in LuxVue's patent relating to fingerprinting was covered in another Apple patent covered in a report posted in February 2015 clearly illustrating an Apple iPad. The original patent point #44 of the patent mentions infrared as one of many technologies Apple could use for fingerprint ID on future displays. Apple was granted this patent back in May 2016. 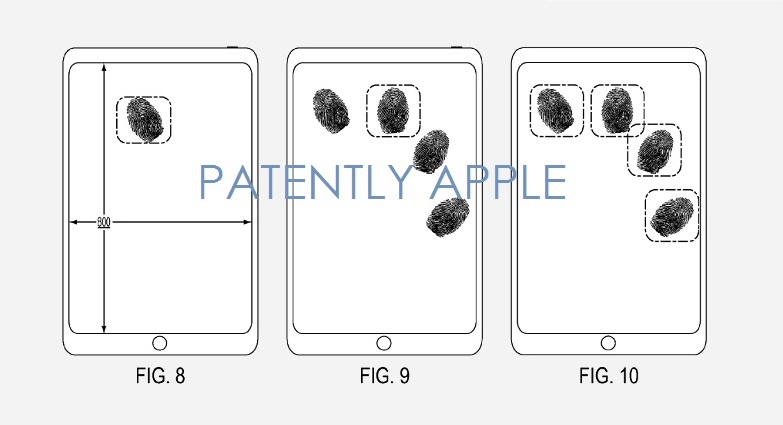 It should be noted that 99.9% of LuxVue's patent is about an advanced Micro LED display that is LuxVue's focus as a company. The detail is incredible, for a Micro LED display. However, they do note further in the patent filing in one part of a paragraph that "Alternatively, in an embodiment, the LEDs are OLEDs. The interactive active matrix display is meant to be one example of the display panel though other types of interactive active matrix displays are contemplated in accordance with embodiments."

Apple's granted patent 9,570,002 was originally filed in Q2 2014 and published today by the US Patent and Trademark Office. Review the patent here for finer details.