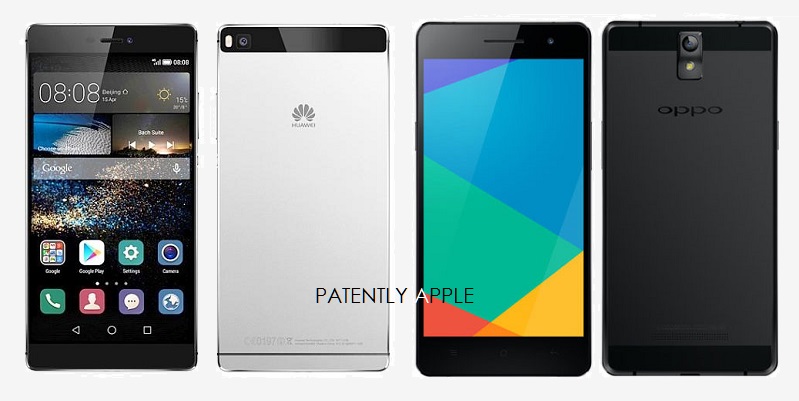 In Q3 2016 Patently Apple posted a report titled "Oppo Flies to top Smartphone Vendor in China for Q3 with Apple landing in Fifth Spot." With Apple releasing their new iPhone 7 and iPhone 7 Plus with a cool new dual lens camera it was expected to see Apple rebound in China in Q4 2016. While Apple had a record breaking quarter for the iPhone, it didn't even make a dent in China as a report by Canalys shows that Apple remains in the cellar of the top five smartphone vendors in China as noted below. Though to be fair, the more reliable IDC statistics placed Apple solidly in fourth spot. 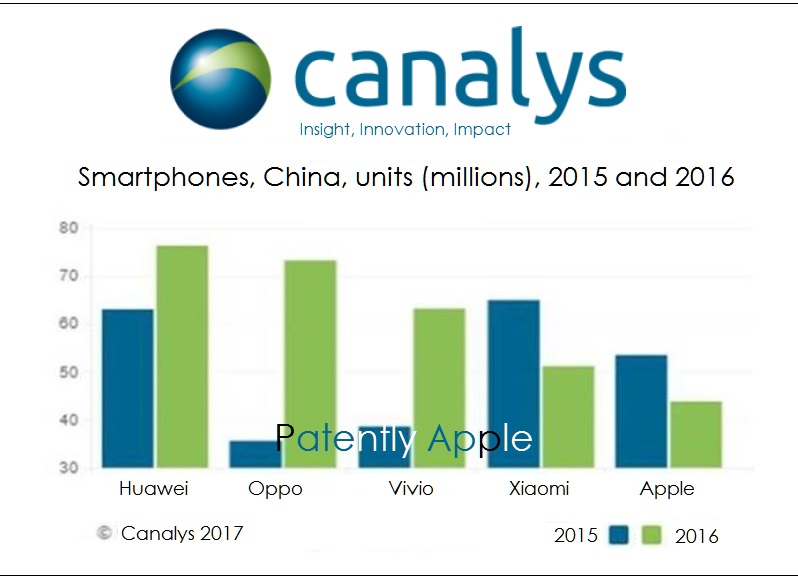 The Canalys report noted that "While Apple, Samsung and Xiaomi are all in the process of adjusting their strategies in China, Huawei took the opportunity to consolidate its position in the tier-one and tier-two cities. Canalys Research Analyst Jessie Ding noted that, meanwhile, 'Huawei also began attacking Oppo and Vivo's backyard in the tier-three and tier-four cities, through its 'thousands of towns,' targeting open channels.' Conversely, Oppo and Vivo started to move upscale to target consumers in the tier-one and tier-two cities through heavy investments in branding.

Ding added, 'In 2017, competition between Huawei, Oppo and Vivo will become much more intense, while their increasing scale and bargaining power within the industry will have a larger impact on device strategies of operators and open channel partners. This will leave very little room for smaller brands to increase share. Moreover, among these three vendors, it will be difficult for one of them to capture more than 20.0% market share and be a clear leader under current competitive conditions.'"

Apple's CEO talked about the Chinese market during Apple's financial results Conference Call for Q1 2017 starting at 29:05 minute mark of their audio replay. Cook said that out of the decline of 12%, 4 points of that was currency related so that they were really down about 8%. Cook pointed to the iPhone 7 being the number one smartphone in China for the quarter.

But in the bigger picture, Cook stumbled in trying to talk about China, shifting to Mac sales and iPad sales up or that they did well on Alibaba. But in truth, China's smartphone vendors are beating Apple fair and square with quality designs and much lower prices. Something Cook didn't want to admit outright. He just said that they have challenges. Yes, the challenges are Oppo, Vivo and Huawei.

During Apple's last Financial Conference Call, their CFO noted that even though sales were down in China in Fiscal Q4, Apple would return to growth in China in the December quarter. That didn't happen.

Will the anniversary iPhone model be able to reestablish their lead in China, or has the ship just sailed out of their reach going forward with Chinese smartphone vendors now in total control?

There's no doubt that hot innovation and advanced features could be the way Apple regains their leadership in China in Q4 2017, but lower prices have clearly become the weapon that is currently winning the day and that's unlikely to change short of the iPhone being reinvented. And one of Apple's 2017 models may do just that.