On Friday we posted a brief report on Apple suing Qualcomm and then on Sunday we followed up with an indepth look at Apple's lawsuit to discover the details of their case. Today Wall Street got their chance to weigh in on it – and the tide is against Qualcomm big time. Shares of Qualcomm (QCOM) are down in and around the $7.81 mark or 12.42% at $55.07 after multiple outlets reported on Friday that Apple, one of its largest customers, had filed suit against Qualcomm for withholding $1 billion in rebates owed Apple, in a move to punish Apple for helping South Korean regulators investigate the chip maker. Bertstein Research voiced it best by stating that "It's bad news when your top customer sues you." 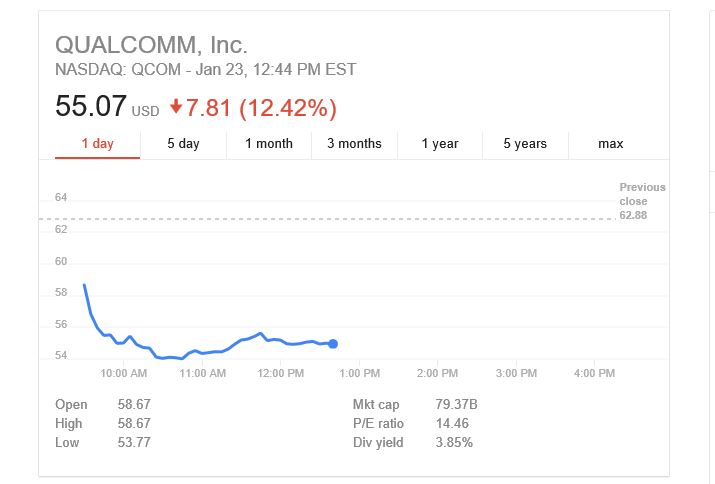 "AAPL claims that Qualcomm 'leverages a thicket' of over 30K patents, without performing a patent-by-patent analysis to determine whether their claimed standards-essential patents are in fact essential, whether AAPL or other licensees would be actually infringing them, whether all of the patents are in fact valid, or whether appropriate royalties might vary on a patent-by-patent basis. » Additionally, AAPL is directly going after Qualcomm's device-level royalty structure. They make the claim that setting royalties as a % of the device price has no tie to the merits of QCOM's cellular SEP portfolio. They argue that charging more royalties on feature-rich higher-ASP phones (even though the cellular technology within them is potentially identical) flouts the "non-discriminatory) part of FRAND (as licenses shouldn't pay different amounts for the same technology). And they argue that setting payments as a % of the device price violates the least-saleable unit principle (that FRAND royalties should only be charged on the least-saleable unit within a system that practices the licensed IP (in other words, they are explicitly seeking chipset-level, rather than device-level, royalty pricing). » They also argue the principle of patent exhaustion (i.e. that the act of purchasing a product grants the right to use the IP implemented by that product). And allege it is unlawful for Qualcomm to collect a separate royalty for IP on a product they sell.

It would appear by Wall Street's reaction that they're not buying into Qualcomm's over confident assertion that Apple's claims are baseless.